Home Uncategorized Worth the Trip 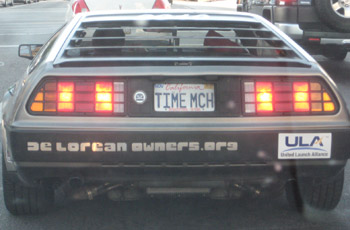 If you think you’re seeing more DeLoreans on the street this week, it probably has to do with the eight days of festivities marking the 25th anniversary of everybody’s favorite time travel epic, Back to the Future. The elaborate schedule of events has included field trips to the homes of Marty McFly and Doc Brown, Hoverboard workshops and tours of filming locations like Whittier High School and Universal Studios. The grand finale is coming up on Friday night: A re-staging of the films’ climactic “Enchantment Under the Sea” dance at the Hollywood church it was filmed at. The tickets cost a bit more than they would have in 1955, but you’re guaranteed not to meet your own teenage mother there and proceeds benefit Michael J. Fox’s Parkinsons Foundation Team Fox so put on your saddle shoes and head back.