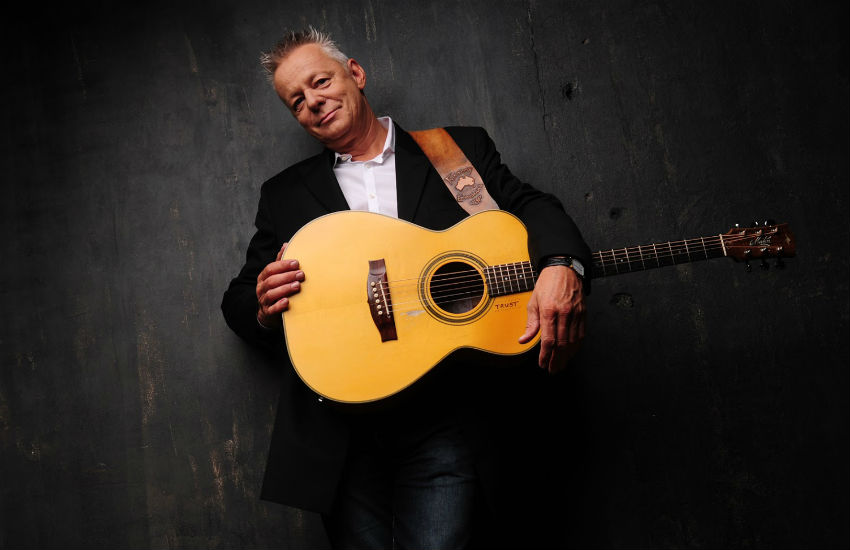 Tommy Emmanuel is a working musician of the old school. Widely considered to be one of the best living acoustic guitarist, tonight he will walk onstage at Valley Performing Arts Center in Northridge for one of the 300 shows he’ll play this year, just like most years. The Australian’s aptitude for Travis picking—that fingerpicking style that sounds like he is three guitarists at once—put him on the map. He’s the type of artist you have to see to truly experience.

Practically born with a guitar in hand, by age ten, Emmanuel had already toured Australia up and down. He’s played with Eric Clapton, Tina Turner, Air Supply, Men at Work, Les Paul, Albert Lee, and Stevie Wonder, and was awarded the honor of Certified Guitar Player by his idol and mentor, Chet Atkins—a title held only by four other guitarists in the world.

We spoke with the guitar master as he prepared to hit the road again supporting his new best-of album, Guitar Mastery of Tommy Emmanuel, and found out why Los Angeles holds a special place in his heart.

The way you play guitar is physically demanding. What’s it like to do that on stage 300 nights a year?
Well, I’m trying to get good at it. You’ve got to get to work! [Laughter] I’ve played in L.A. many times. In fact, it’s the first place in America I played—The Baked Potato in North Hollywood back in the ’80s. It’s tiny. I used to do two shows a night. Quite often, I would play there when I was living in Australia. So I’d fly over, get in on the morning of Monday, do the show Monday night and fly back to Australia on Tuesday.

Given the exhaustion, why play so many dates a year?
I get on a roll and I feel that the more I work the better I’m getting at it. It’s almost like a drug. You want to keep raising your standard and the only way you can do that is through constant working at it. Playing shows is the best way I know how. I could sit in my bedroom and practice all day and still not play with the same intensity and imagination as when I walk onstage in front of people. That’s a whole different ballgame.

Is that something that was instilled in you as a child? Your parents stoked your musical interests from a young age.
Yeah. I think my father was pretty disciplined. Well, he was a disciplinarian. It was like, “Ok, you’ve got to practice now. Now, lay down. Now, do the show.” I got trained like a soldier right from the beginning. But I’m very relaxed about everything and, while I’m very serious about what I do, it’s not like, “Oh, I can’t go on because I haven’t practiced for four hours solid.” I can get out of bed and go play a show. It doesn’t bother me. I’ve been lucky that way.

You’ve collaborated with many a great artist. Who have been your favorite artists to work with in your career?
Back in the late ’80s, I did a tour with Albert Lee and that was great fun. I learned so much from him. In 1990, I toured with Eric Clapton in Australia and that elevated me to another level and gave me a look at how he did things, how he constructed his show every night, and what he did in his playing. I observed everything. In 1980, I did a tour with Stevie Wonder. I was in a band and we were the opening act. That was an enlightening tour, as well, because I saw talent on a level you very rarely see. I saw a guy who approached everything like a child, with enthusiasm and that deep love and passion for music. It was exhilarating to be around Stevie Wonder.

Years later, when I came to America for the first time to meet Chet Atkins, we just hit it off so well as people. We kept writing and sending tapes to each other. Soon I got the call about recording with him. I had to get myself to a certain place in the business before he was interested. I had to get a few platinum albums and some awards and some notoriety to get the attention of my hero. [Laughter]

You got to be on the last album he recorded, correct?
That’s right. It was an album of duets, which I produced. It was joy for me to be working with him. It was hard because he was struggling with his health, as he had cancer of the brain. But we finished the album, and it got nominated for a Grammy, and we won the National Music Award for Best Instrumental Record. It was a wonderful opportunity.

With Chet bestowing the honor of Certified Guitar Player on you, do you feel like you’re carrying on his legacy?
I don’t know about Chet’s legacy; I’m doing the best I can with what I’ve got and I know it’s a big responsibility. I’m mainly concerned that the younger generation have something good that they can go to. They can look at our repertoire and our arrangements and say, “This works. I’m going to follow that direction and see what I can do with it.”

Take us to the moment you found yourself playing the Closing Ceremony of the Sydney Olympic Games to almost 3 billion people with your brother Phil?
It was unbelievable. Just before we went out there and the show started, we were standing way up in the area where you could look down on the sports ground and there were 200,000 people down there and incredible lights—what a spectacle. I said to my brother, “Take a photo of this with your mind, because it will never happen again in our lifetime.” That we got to do it together was great.

You have a long history with L.A. Do you have any favorite spots or getaways while in town?
I enjoy going to Malibu and just walking along the beach. I’ve got some good friends that live out that way. Malibu is a very special place, I think. It has a great vibe and it full of very nice people. If I could afford it, I’d probably move and live there. It’s a little bit out of my league right now.