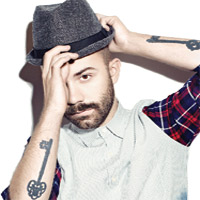 Sandy has made it all the way to the west coast. We’re not being flooded or lashed with wind, but due to the travel snafus caused by the hurricane, multimedia artist Woodkid has canceled his Saturday night show at the Luckman Fine Arts Complex.

Who is Woodkid? A French guy who spends a fair bit of time in Brooklyn, his real name is Yoann Lemoine. In between directing high-profile videos for Katy Perry, Taylor Swift, and Lana del Rey, he somehow found time to record his own six-song EP, Iron. The title track’s video, a gorgeous slow-motion montage, plunges model Agyness Deyn into a realm that is equal parts medieval melee and futuristic video game. With his first album, The Golden Age, set to be finished before year’s end, the genre-bending polymath is bringing his various talents to the concert stage.

Is Lemoine a visual artist who sets his haunting monochromatic videos to music? Or is he a musician who embellishes his tribal, electronic-tinged pop songs with baroque short films? Hopefully, the 29-year-old performer will reschedule his L.A. show, and Angelenos can decide for themselves.