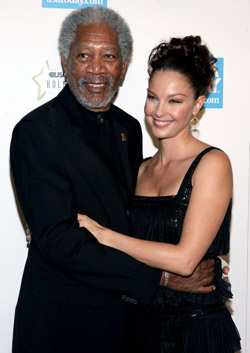 When I arrived at the Montage Beverly Hills Tuesday night for the fourth annual USA Today Hollywood Hero Awards Gala honoring actress and humanitarian Ashley Judd, I sensed that the excitement of the night’s festivities might be dulled somewhat by the odd formality of the setting—the hotel’s windowless Marquesa Ballroom. How wrong I was. The event was full of heart, and I felt it from the moment the parade of speakers began to take the stage. There was Kate Roberts, the founder of YouthAIDS—and the force behind such initiatives as MTV’s “Staying Alive” concert and Aldo’s “Hear No Evil, See No Evil, Speak No Evil” campaign—who shared her memories about Judd (“I loved you in Pearl Harbor,” she’d once told the actress, attempting to break the ice after an emotionally fraught moment during a humanitarian mission for YouthAIDS, to which Judd had replied, “Kate, I wasn’t in Pearl Harbor!”). Then there was Santa Monica City Councilmember Bobby Shriver, also the CEO of Product Red, who rushed in from a Santa Monica neighborhood council meeting (“I always like being announced as Bono’s partner,” he joked, before launching into a heartfelt tribute to Judd). There was also a surprise appearance by Earvin “Magic” Johnson. “After I received the award last year, I said, the next person has to be beautiful,” Johnson told the audience with a laugh before asking to take a picture with Judd. “I’m not shy—everybody else is shy!”(other celebrities in attendance included Debra Messing and Morgan Freeman, both of whom shared their personal admiration for Judd’s humanitarian work, as well as Molly Simms and Mandy Moore). Finally, it was Judd’s turn to accept her award. “This is mildly overwhelming,” she said, choking back tears. “I get a lot out of what I do,” she continued. It was clear others in the room that night felt the same.