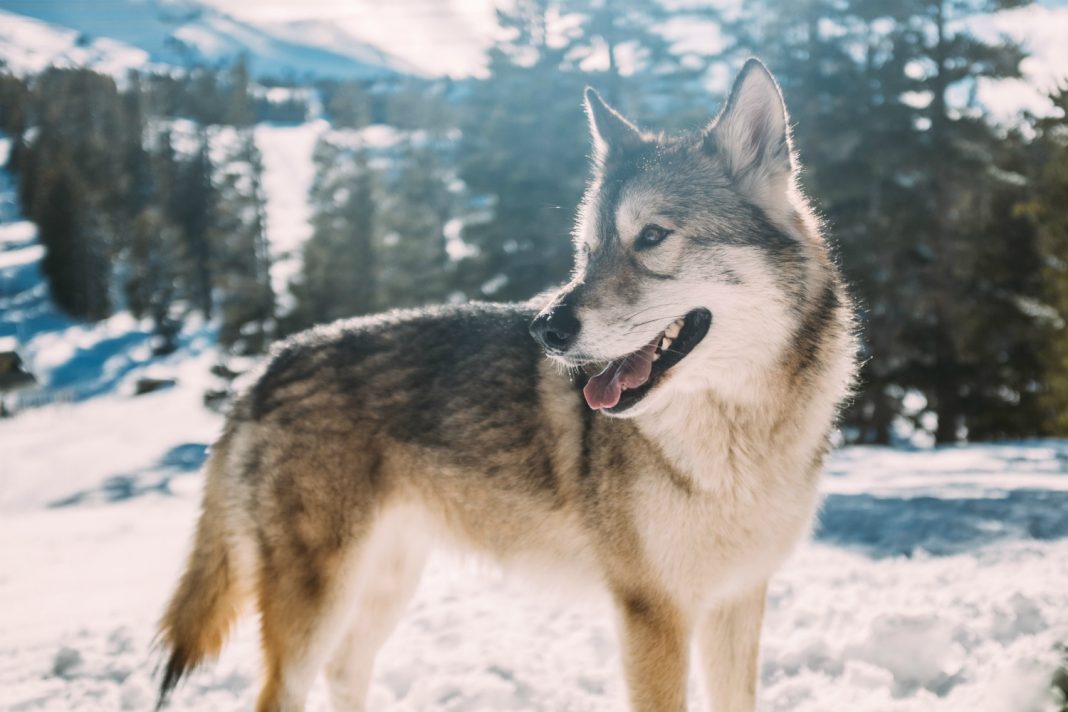 I recently journeyed into the Angeles National Forest (a first), not to finally be able to say, “Oh, that’s where La Cañada Flintridge is,” but because I was hellbent on petting a wolf.

I’ve read Women Who Run with the Wolves and I’m also Team Stark. Wolf Connection in Palmdale offers the opportunity to hike with wolves, but that wouldn’t have been enough to compel me to drive an hour outside of Los Angeles or spend $65 to walk with a wild creature for Instagram. It was their Instagram account that made me curious enough to bow before the mighty wolf to explore what they needed to teach me—which turned out to be a lesson about love.

Wolves are extremely intelligent, highly intuitive animals. They know who you are at your core within a matter of seconds. Whatever emotionally ails you, they’ve diagnosed it like the best doctors on Earth (it’s one of the reasons Wolf Connection works with at-risk youth).

Everyone has something to heal, but I didn’t have any expectations of what I’d learn. I was just excited to meet a wolf, or the closest humans can get, the wolfdog. These hybrids are manmade creatures and they’re illegal to own. Wolfdogs are immediately euthanized upon capture unless a sanctuary can take them in.

The sanctuary looks like an unassuming ranch and houses approximately 30 wolfdogs in fenced-in areas the size of large studio apartments. Some live alone, but most have a roommate. As we walked by each enclosure, our guide shared each animal’s back story and rank in the pack. Some of their stories are horrifying (several new pack members’ vocal cords were cut by an owner afraid of neighbors calling the police due to howling), but it was interesting to hear how the animals are paired.

In each enclosure, wolves are matched based on temperament. An anxious female will be placed with a grounded male. One who is more playful will be with one who is less so. An Alpha will be with an Omega. They work together to maintain balance.

When looking for a mate, we (humans) often seek sparks, passion, a guy with a good job, a woman who’s a perfect 10, someone who lives on the Westside or has an extra parking spot. In other words, we have criteria. That’s great. We need to have our non-negotiables. But maybe we also need to be mindful of creating balance. If you find a partner who tempers your weaknesses with their strengths, you’ll be greater together.

I’m high-strung no matter how much I meditate or swill CBD. Even if I find a mate who fits all my non-negotiables (must love dogs!) but is also high-strung, we’ll Flava Flav each other until we combust. A guy who’s more zen would balance my hyperawareness. After seeing how the wolves work together, I now ask myself, “Which guy will add elements I’m missing so we’re both much better together?”

I felt fairly satisfied with this revelation, like I got my money’s worth. That is until I met Koda.

The next part of the experience was a 1.5-mile hike around the ranch with six of the friendliest wolfdogs. In the safety talk given by the owner of Wolf Connection, Teo Alfero, we learned that wolves do what they want, when they want. Even though these animals are on leash with a handler, they’ll greet us if they want. Humans kneel in front of them, with our bodies turned to the side and a hand extended. If the wolf chooses to let us pet them, he or she will show us.

After presenting myself to Koda, he leaned in and smelled my entire head, neck, and chest. My instinct was to jerk away, but I was afraid to make any sudden movements (because teeth). He gently kissed my ears, shifted to my face and down my neck. Such an outpouring of immediate love from an unknown creature felt overwhelming and uncomfortable. When he began to lick my chest, his handler pulled him back, asking him not to be inappropriate. My initial thought was, “He’s a boob man!” But then I realized he concentrated his kisses to my left side. He was kissing my heart.

One of the most difficult acts for me (and a lot of people, especially women) is to receive love. I’m great at giving it, but much like compliments and gifts, I’m still a work in progress when it comes to letting someone love me. I sat through my discomfort with Koda until I was able to enjoy his love. When he moved on to the next person, I felt sad it was over. That’s when I understood what he was teaching me: it’s safe for me to receive and enjoy love.

After Koda, I felt like a wolf superstar who had five more amazing encounters to rack up. I had brief encounters with the other four wolves on our hike, but they just weren’t that into me. Just when I thought Koda was the highlight of my day, I met Bella.

I remembered her from the tour because our guide told us she has excellent boundaries. After presenting myself to her, she sniffed my hand. She raised her head and turned her shoulder toward me. Her handler said, “She’s inviting you to pet her.” I carefully rubbed a small patch of her chest. She leaned into my hand, which she gently kissed. After more petting, she softly kissed my cheek. It was a more controlled interaction than with Koda, but one of mutual respect and affection.

Over the past year, I’ve been practicing setting boundaries. Sometimes, it sparks guilt within me because I feel like I’m letting someone down, even if it’s the best choice for me. Bella showed me the beauty of maintaining our space and identities while enjoying affection.

After my time with Bella, the group hiked in silence back to the ranch. I felt a mix of satisfaction, quiet excitement, and fatigue. It’d been three hours in the presence of these mighty animals, who served as human energy purifiers, leaving me with a sense of calm and groundedness.

I drove home through the Angeles National Forest (its a lot like the old Pole Position arcade game) feeling lucky to be in such close proximity to such a beautiful place and able to experience something truly special. Some of my biggest fears about love—receiving it and doing so while maintaining my boundaries—weren’t gone, but I knew that it was possible for me to do both without imploding/exploding/having a panic attack/hyperventilating/getting slapped (I have a big fear of getting slapped across the face from watching too many dramatic movies as a kid). All thanks to a pack of wolves.

RELATED: Can Angelenos and Coyotes Coexist?

This Couple Declared Their Love Before the First Kiss

A First Date in Paris Kicked Things Off for This Couple