Home Celebrity The Wizard and I: Meet Wicked’s Great and Powerful Tim Kazurinsky 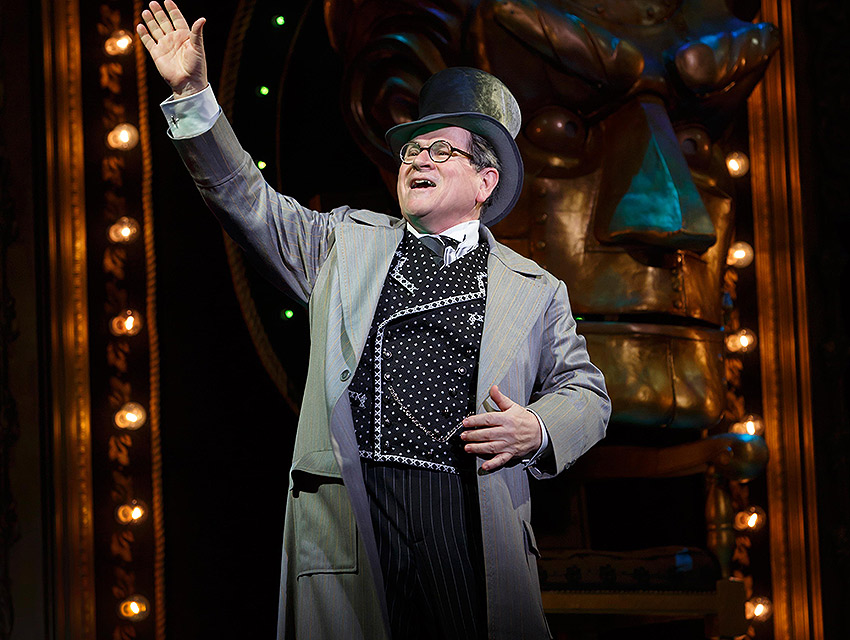 Tim Kazurinsky’s Midwestern sensibilities are hard to miss, even over the phone.

The former SNL castmember (he was on from 1981-1984), screenwriter (he penned 1986’s About Last Night…) and actor (you may recognize him as Officer Carl Sweetchuck from Police Academy 2, 3, and 4) was born in Pennsylvania but calls Chicago home, and he’s every bit as humble and polite as any Chicagoan I’ve ever met. (I should know—I’m from there myself.)

On Wednesday, December 10, the critically acclaimed musical Wicked returns to the Pantages theatre, and Angelenos will be treated to Kazurinsky’s interpretation of that all-important role: The Wizard of Oz. But for him, spending ten months touring with an all-star cast (many of them have performed the show on Broadway) has been more of a privilege than landing the role itself. “I feel so honored to be allowed to play with them,” he says. “Every night it’s a thrill to be on stage.”

With all his wizard wisdom, we thought it wise to get to know the man behind the curtain. Check out his Q&A below, and visit the Pantages’ site for ticket information.

What’s the first thing you noticed about L.A.?
Flat. Flat as a pancake. It’s not tall. Chicago is a tall city; L.A. is big and wide.

One magical thing about L.A.?
Friends. I have friends from SNL, friends from the Police Academy movies, all the movies I’ve done and written, and from Second City. I was at Second City since ‘78, and I’ve known every cast member that has come through since then. All of those people are in Los Angeles, and I never get to see them. Now I’ll get to have lunch with about 150 people.

One not-so-magical thing?
The air. Although with the Santa Anas, I do think winter is a good time to be in L.A.

Speaking of magic—and wizards—Gandalf or Dumbledore?
Gandalf. My son would kill me if I chose Dumbledore. He’s a Hobbit addict.

The most uncomfortable part of your costume?
Me! The costume is perfect. They took three million measurements, and nothing doesn’t fit. It fits like a glove—even the gloves fit like a glove. I only get one costume. Everyone else gets like 20, and here’s an interesting fact: all of theirs are brilliantly colorful and green and phenomenal. I have the only monochromatic costume because [the wizard] is from outside of Oz. But I don’t care because I get to wear a top hat.

True or false: Traffic is worse in L.A. than it is in Chicago.
True. I have one answer for that: 405.

Your favorite behind-the-scenes moment?
One time my wife called about my kids, so I shut off my squawk box speaker system for a moment. I didn’t hear them announce that they were putting in a different Elphaba because the other Elphaba had gotten sick. I came out for the second act, and there was a different woman on stage. I was the only person in the building who didn’t know that they changed Wicked Witches. I’m like, OK, I’m in my 60s, I know I’m getting old and senile, but I don’t remember this woman from the first act! The first minute or two, I was like, I’ve lost the plot, I’m officially in dementia land. But then I got over it. I steadied the ship and pressed through.

In-N-Out or Portillo’s?
In-N-Out for burgers, Portillo’s for hot dogs.

UCB or Second City?
Totally Second City. I love UCB, but you gotta be true to your school. I’m an Improv Olympic guy as well. That’s my backup. But I don’t want to be hating on folks in L.A. UCB is fabulous.

Juice cleanse or carb loading?
Carb loading. On tour, I’ve been indulging in comfort foods. When I do the juicing thing, I don’t digest that stuff really well. I’m back and forth to the john like crazy. Although I’m trying not to eat white [carbs] in preparation for L.A. I’d like to lose a few pounds before arriving, but I don’t know if it’s working.

Idina Menzel as Elsa or Elphaba?
Elphaba. That’s how she became who she is. We should drop her a line and ask her, but I think she’d say Elphaba, too. She is astonishing.

The On-Sale Date for L.A. Hamilton Tickets Has Finally Been Announced