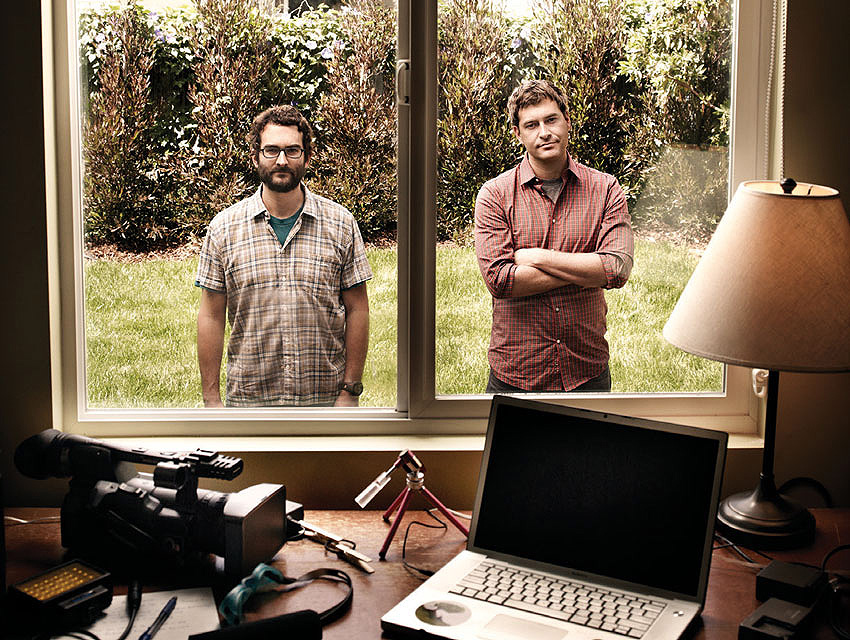 The humor is as palpable as the malaise in Togetherness, a domestic study set among the hipsters and strollers of Eagle Rock. Debuting on HBO on January 11 (following a coveted lead-in from Girls), the show stars Melanie Lynskey and Mark Duplass as Michelle and Brett, a husband and wife struggling to reinvigorate their marriage while Michelle’s very single sister (Amanda Peet) and Brett’s failed-actor friend (Steve Zissis) crash at their house.

Brothers who share credits and quips, Mark and Jay Duplass cowrote and directed almost all of the eight episodes. Since joining the indie big leagues with their $15,000 debut feature, 2005’s The Puffy Chair, the Duplasses have directed four films. The movies traffic in their obsession with the minuscule triumphs and defeats of daily life. “Every person in this show has secrets that we are slowly unraveling,” says Jay, 41, during a visit to Travel Town in Griffith Park with Mark, 38, on a balmy morning. “The drama is heightened by the fact that it’s real.”

If The Puffy Chair is a snapshot of twentysomethings deciding whether to marry or split from their partners, Togetherness picks up the thread a decade later as grown-up characters confront their lack of contentment. Both projects are unabashedly rooted in the Duplasses’ own lives, down to the setting. Like Michelle and Brett, Jay and Mark each have two young kids and reside in Eagle Rock.

“The major conflict of our lives truly is: How do you be a good husband, a good friend, a good dad and maintain your own humanity?” Mark says. “It’s impossible,” Jay adds, “and very funny.”

Plus: 1 Book and 3 Movies the Duplasses Love:

Mistaken for Strangers
Trying to sort out his life and also find creative focus, a brother of the lead singer for the National follows the band on tour.

Margaret
Kenneth Lonergan’s 2011 drama stars Anna Paquin as a teen who has the potential to become, as Jay says, “totally amazing or totally horrible.”

Cutie and the Boxer
The tumultuous 40-year marriage of artists Ushio and Noriko Shinohara is depicted in this unflinching documentary.