Home Uncategorized Wish You Were Here 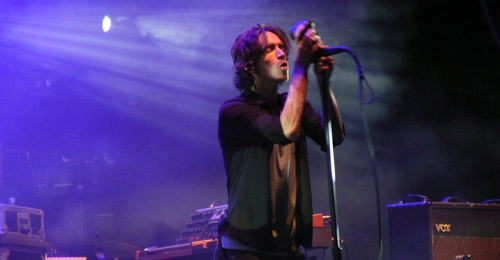 It’s hard to keep a secret on the Internet—especially if it’s about an unannounced Incubus show.

A warm-up gig for their summer tour, which includes a show at the Hollywood Bowl, details (line up at the Echoplex in Silver Lake at 5 p.m.) didn’t leak until Sunday night.

I debated if I should go or not. I imagined standing in a long line, being pushed around, and the soreness of the morning after. Besides, I saw them play at the Greek two years ago.

So I stood in line for three hours, with all the expected pain and suffering, and managed to get in. Once inside, there was more waiting and more pushing. And it was hot.  Fortunately, there was music playing to distract us. The crowd eased when “Hey Jude” began to play. Arms went up in the air and someone waved a lighter as we all sang along, and I forgot about my aching feet.

Surely our joyous singing would bring the band on stage, I thought, but my hope wavered each time a song ended and there was, still, no signs of the boys. Finally, the band walked on stage to a deafening roar.

“Thanks for coming out on such short notice,” said lead singer Brandon Boyd. The band opened with “Redefine” from S.C.I.E.N.C.E and followed with “New Skin,” but it wasn’t until “A Certain Shade of Green” that the crowd went crazy. Incubus played some of their new material too, including “Black Heart Inertia,” the first single from their new compilation album Monuments and Melodies.

Pretty soon, Boyd was glistening with sweat and took off his shirt. He looked like he had stepped out of the shower. I could feel beads of sweat trickle down my back. “Sorry we’re taking so much time between songs,” he said. “We’re old.”

All sinew and bones, Boyd reminds me of an unstable yoga instructor when he’s performing. One minute he is deep in trance, his arms extended above his head then lowered again, fingers wiggling towards the crowd, casting a spell. Then he screams.

When the band began “Privilege,” the words to the song came out of my mouth effortlessly, like some long-forgotten language I once knew. The same thing happened during “11 A.M.,” “Make Yourself” and “Nice to Know You.”

Then in a surprising twist, the band covered Prince’s “Let’s go Crazy.” “Dearly beloved,” Boyd spoke into the microphone. “We are gathered here today, to get through this thing called life.” We danced with the little energy we had left. It was the band’s last song for the night.

I wanted to hear “Wish You Were Here” or “Stellar.” We waited around, clapped and chanted the band’s name. But the lights came on and the drum kit was carried away. I made my way outside, into the cool air, and finally remembered my feet.