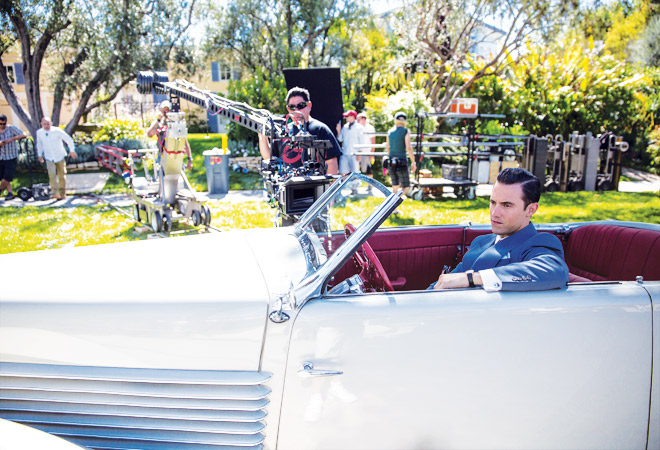 Milo Ventimiglia as Ned Stax, Mickey Cohen's fixer. Streets like this one in Windsor Square were re-vamped for a 1940s look. Photograph by Doug Hyun

Mickey Cohen loomed large as one of L.A.’s most fearsome criminals. Now he hits the small screen in Frank Darabont’s six-episode series, Mob City, which debuts December 4 on TNT. Re-creating the underworld of 1947 was harder than capturing Cohen himself. “This is noir filmmaking on the next level,” says production designer Alex Hajdu, who agreed to sing like a canary about a few simulated spots.

CITY HALL: When detective Joe Teague (Jon Bernthal) collars a perp, he heads to the iconic building on Spring Street where LAPD headquarters used to be. The art department reconstructed a replica of the interior at Red Studios in Hollywood, spending four days on details as small as matching the colors of the set’s floors to those of the real deal.

BUNKER HILL: Some scenes required only a well-placed vintage car (like a 1937 Cord). But Bunker Hill’s businesses and hotels, which were razed along with the Victorian mansions after the passage of the 1949 Housing Act, were digitally rendered to their earlier glory.

ANGELINO HEIGHTS: The crew also uncovered some gems, including a bodega near Glendale Boulevard that was tweaked to become a century-old grocery store. “We changed the facade, put an awning on it, and all of a sudden we’re defining an era,” Hajdu says.