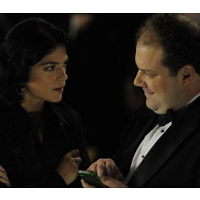 It might be the most depressing meal ever, but if you’ve ever wanted to talk one-on-one with director Todd Solondz, here’s your chance. The filmmaker who achieved his first major success with 1995’s grim but hilarious coming-of-age flick Welcome to the Dollhouse and went on to make lighthearted romps like Happiness (don’t be fooled by the title, fraying marriages and pedophilia are dominant themes) and Storytelling (more unhappy people) has a new film.

In Dark Horse, Jordan Gelber stars as Abe, a schlubby, thirty-something toy collector still living at home with his parents. He falls in love with Miranda (Selma Blair), and the unlikely romance blossoms despite impediments constructed by both of their families. Despite the generally pitiless tone of Solondz’s ouevre, Dark Horse looks fun. Solondz has described it as a “sad comedy.” Does that mean you should laugh? You can ask the director yourself.

The film opens tomorrow at the Nuart in West L.A., and Solondz be on hand for screenings throughout the weekend. Even better, two lucky moviegoers who show up on opening day (July 27) will win a dinner with him. Winners will be decided by a blind drawing, and the dinner will occur on either July 28 or 29 at all-American gastropub Plan Check, which is just down the street on Sawtelle Blvd.