Home Film The Restoration of Wilshire Boulevard Temple Became a Doc About the Power... 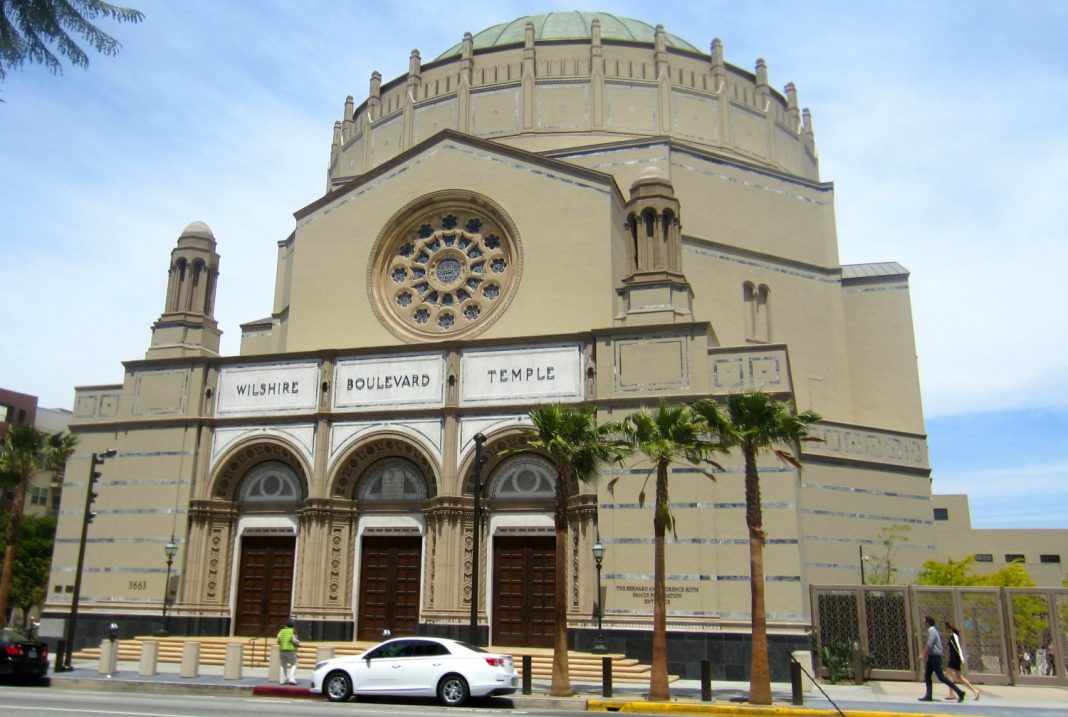 While the deteriorating Wilshire Boulevard Temple was being restored to its former glory (renovations are ongoing), filmmaker Aaron Wolf and his team documented the progress. As laborers and artisans overhauled the building’s iconic gold dome and retouched the Hugo Ballin murals that adorn the walls of the edifice, Wolf—whose grandfather, Rabbi Alfred Wolf, served the temple for many years—interviewed congregants and reconnected with the Jewish community and the faith he he’d drifted away from.

Wolf’s documentary, Restoring Tomorrow, screened at fests in 2016, but now it’s being released theatrically for the first time. Wolf is hosting a series of screenings at Laemmle theaters in the hope that the film can help unify a fractured nation. “In some small way, I hope this film will help promote the bridge-building work of my grandfather so we can heal again and the conversation can continue,” Wolf says.

He answered some questions about the structure, community, and his journey of self-discovery.

How did you begin researching the Temple to begin with?

Some of the most rewarding things happen when you are, at the time, down in the dumps. That’s the case here. My personal low led to something truly special. At the time, my upcoming marriage had just been called off weeks before the wedding. I went to talk to Rabbi Steve Leder a little while after this. He’s known me my whole life as well as my grandfather, Rabbi Alfred Wolf, who helped train him and usher him into Wilshire Boulevard Temple. So I sat down with Steve to try and re-find the road of my life that, at the time, felt very bumpy. He knew I was a filmmaker and asked if I’d make a few short pieces chronicling what he was trying to make happen at the temple with different stages of restoration and renewal. Little did I know, I would also be embarking on a restoration and renewal of myself. Never did I think it would be a feature documentary that people around the globe would get to see. I simply did not see a bigger picture. Remember, I was still stuck in MopeLand. (It’s actually a secret land at Disneyland that few people know about)

When and how did you know it would become a documentary?

When I dive into a project, no matter what the film, whether I’m acting or directing, I put my heart and soul into it and make it personal in terms of my connection to whatever the subject matter may be. But Restoring Tomorrow puts other films I’ve done to shame. I dove in. I wanted to find new purpose in life, and this was feeling like it might be it.

Around six months after meeting with Rabbi Leder, I started to learn so much about my family, my grandparents, and the Temple’s history and stories. This building started to have a new life for me and, as I got connected, I wondered if I might be serving as a microcosm for any young person out there wanting to connect to a place that matters to them or maybe not realizing how much, deep down, it truly matters to them. So I explored other places as well. Maybe, just maybe, this story is actually more universal than I initially thought in my “MopeLand Meeting.” (That’s an official dictionary term actually. Look it up.) As producer Tim Nuttall, editor/co-producer Simon Carmody, and I dove further in (this was definitely a big time collaborative team effort), we kept finding more little gems and got to seeing what this all really meant.

Especially in our current climate, places that matter to a community and open their doors to their neighbors, no matter what race, religion, or culture, are more important than ever. And maybe, these places, big and small, big city or small town, when restored, can be centerpieces for positivity in the community.

What’s an aspect of its history that you found particularly interesting?

The history blew my mind because I never fully grasped the transition L.A. took from tiny town to giant megalopolis in such a short period of time. And I look at Wilshire Boulevard Temple as the “Forest Gump of Temples.” That might sound silly, but you know how Forest Gump (in the film of the same name) takes us through eras of history as it happens all around him. Well, the Temple is that to Los Angeles. It’s been here since the beginning, and it’s been one constant through our ever-evolving city. Which, as you see in the film, shows how unbelievably important this undertaking was. In many ways, L.A.’s history and the Temple’s history go hand in hand. I mean, think about it: When Wilshire Boulevard Temple was founded, Abraham Lincoln was President of the United States. And the Hollywood moguls, from Louie B. Mayer to the Warner Brothers all founded it and it was like a Hollywood deal-making hub—as an actor and director, this was extra fascinating. We talk about it in the film. I don’t want to give away too much, but it’s extra unusual why some of the funding came from them and which movie in particular was of extra importance.

How do you think the story of the Wilshire Temple is edifying or useful to a broad audience?

Restoring Tomorrow isn’t just about Wilshire Boulevard Temple, it isn’t just about me, and it isn’t just about some of the other churches, temples, and other landmarks we highlight or visit. This story is about us…us as Angelenos, us as United States citizens, and us as people in any country in this world really. When we have a place that matters to a community, that place becomes a vessel for positivity and for us to go out and make the world a better place. And when we let our place that matters go to waste, we are destroying, not just our community’s foundation, but also our personal foundation for the future. I’ve personally changed so much since I first went into Rabbi Leder’s office. Diving into this story and having the Restoring Tomorrow journey has changed my life. And the end of the film will, I think catch you off guard, in a good way. I know it has to me, since I do believe the message within the film and what happens at the end is truly more relevant right now, in 2018, than ever before. “MopeLand” has officially closed.  But “Make A Difference Land” is open, with doors as far as the eye can see, and ready for anyone and everyone to come right in and join the movement and have a journey to make your community a better place.

RELATED: The Origin Story of the Magnificent Wilshire Boulevard Temple

Will a Pair of Beloved Jewish Summer Camps Rise from the Ashes of the Woolsey Fire?