Home Uncategorized Will the Real Barry Manilow Please Stand Up? 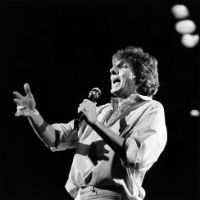 The Backstory
Considering how he started the decade as a faceless, Julliard-educated gay-bathhouse pianist, Barry Allen Pincus’s rise to fame was one of the more remarkable success stories of the 1970s. By 1980, he was Barry “Mr. Entertainment” Manilow, multi-Grammy winning singer, songwriter (with 25 Top 40 hit singles between 1974 and 1983), commercial jingle writer (“Have A Coke and a Smile,” “You Deserve A Break Today”), TV personality, Vegas schmaltz-style pop performer, and unlikely nice-young-Jewish-boy heartthrob from Brooklyn. In 1978 alone, he had five albums on the Billboard pop charts. Yet as the Reagan Era began, Manilow found himself wanting one thing: R-E-S-P-E-C-T.

That’s when the jokes started. “We live in a world where John Lennon was murdered,” comedian Bill Hicks famously snarled, “yet Barry Manilow continues to put out fucking albums.” Both Paul Simon and Phil Collins dissed him in print. (The former drummer of Genesis, if you can believe it, called Manilow’s compositions “soft, spineless music.”) Thing was, Manilow probably would have agreed with them.

His self-admitted competitiveness made it nearly unbearable for him to listen to the radio, and even the simple joy of playing the piano had ebbed. “Art versus commerce,” he later wrote in his autobiography. “I’d read and heard about it for years, and here I was smack dab in the middle of it… Barry Manilow (in capital letters) had become successful, and I needed to keep supporting him, but now I was searching for Barry Manilow.”

After a predictably over-the-top appearance singing “The Star Spangled Banner” at Super Bowl XVIII, Manilow felt like he had closed the chapter on a decade. “It was like the end of a movie,” he recalled. “I didn’t know what to do. I felt the credits should roll: ‘The End.'”

Around this time, Manilow had a nasty exchange with Clive Davis, his label head at Arista Records. The performer complained he had been turned into a middle-of-the-road crooner like Perry Como or Andy Williams. As Davis recalled in his recent memoir The Soundtrack of My Life, his retort might have been the last straw: “Well, if you were Irving Berlin, we would know it by now.”

Then, one night in his Bel-Air mansion, Barry Manilow had a dream—literally. “I always know I’m onto something when I get ideas in dreams,” he later said. “These projects always go smoothly.” He would return to one of his first loves: jazz.

Why You Should Listen
What was distinctive about 2:00 AM Paradise Cafe was that it wasn’t another “pop star discovers the American Songbook” vanity collection (Rod Stewart, we’re looking at you). All but one of the tracks were originals; Manilow skillfully created new songs that sounded like shopworn, forty-year old standards. The record has the intimacy of the old PBS series Soundstage or, true to its name, a brume-filled basement jazz club in the wee hours of the morning.

Manilow originally thought the songs would be recorded separately and flow together as one in post-production. But, after three days of rehearsals, as the musicians filed into Westlake Studio C, Manilow decided on a last-minute change. “During the last two hours of the final day, Barry said, ‘Let’s go from beginning to end without stopping, like we were doing a show,'” recalled guitarist Mundell Lowe. “So we did it—with all the natural segues and no editing… And that turned out to be the record! Barry almost flipped. He said, ‘I spend months and hundreds of thousands of dollars doing an album, and it’s not nearly this good!’ We all got gold records for that. I think it gave Barry a whole different view of jazz musicians.”

Local Color
Manilow’s decision to record the entire album in one 45-minute take may have been influenced by the talent he gathered around him. To execute such a sustained in-the-moment atmosphere, he hired a bevy of West Coast jazz giants like Lowe (the de facto leader and arranger for the studio band), saxophonist Gerry Mulligan, drummer Shelly Manne (who passed away before the record was released), and keyboardist Bill Mays. He also pulled in former Cab Calloway/Bud Powell double bassist George Duvivier and jazz singers Mel Tormé and Sarah Vaughn.

“Working with Barry Manilow was a highlight for me and quite an experience,” Duvivier recalled in his autobiography. “It was a real departure for Barry, with only a quintet behind him and not a million strings, horns, Fender and tympani! Barry knew what he had written… but I don’t think he was sure how it would come off. As we got going, you could see him relax and his eyes begin to light up.” Manilow later called the experience “the most satisfying three days of my entire career.”

The Aftermath
By the time of Paradise Café’s release in 1984 Manilow’s dominance of the pop charts was starting to wane, but anything with his name on it was still bound to go platinum, which it did, reaching #28 on the Billboard 200. A video for the title song was in circulation on MTV (and this was before VH1, folks) and Showtime even aired a special documentary about the sessions. In the liner notes, Manilow professed, “Of all my albums, this is the one I’d like to be remembered for.” Unfortunately, the hating continued. In 2000, Thomas Golovich of Cornell University and his colleagues undertook a study of social embarrassment by making their subjects wear Barry Manilow t-shirts.

Signature Tracks
“When October Goes” – This elegant, torchy lament about time’s passage was a posthumous collaboration between Manilow and the late Georgia songwriter Johnny Mercer, whose widow contributed his unpublished lyrics.

“Blue” – Manilow dutifully takes a backseat to the bluesy effervescence of Sarah “Sassy” Vaughn, who twists her vocal lines around his like pearls around her finger.