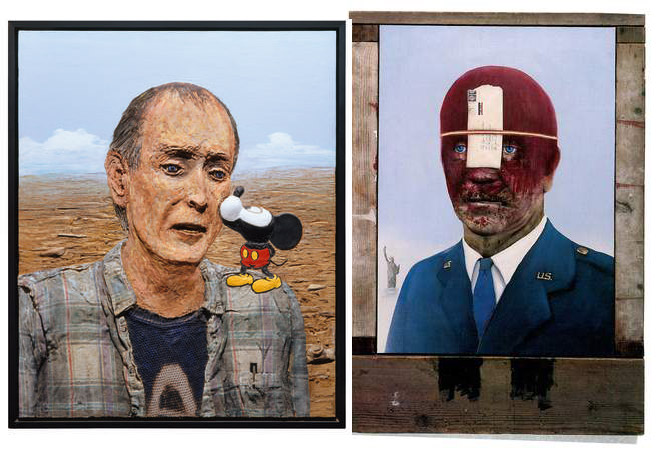 Paintings by Llyn Foulkes, courtesy of the Hammer Museum

Llyn Foulkes is mad, in every sense of the word. He’s angry, opinionated, a tormented genius—and he’ll be the first one to tell you. “I couldn’t get my retrospective at the Museum of Modern Art or the Guggenheim,” Foulkes says. “They’re all in the stock market of art, and I talk against that.” At 78, he doesn’t have the name recognition of his pop art contemporaries Ed Ruscha and Laddie John Dill. The Hammer Museum’s large-scale exhibition of his otherworldly, rarely seen works, which opens on Sunday and runs through May 19, may finally elevate Foulkes to the L.A. canon.

While his Ferus Gallery kin committed to one career-spanning idea, Foulkes is a compulsive creator whose art has evolved across multiple media. In the 1960s, he produced sculptural assemblages made with found objects; in the ’70s, he was known for his “bloody head” paintings and Chatsworth rock landscapes. Then there are his Mickey Mouse paintings, in which the warped and manipulated Disney icon is both father figure and a critique of consumer culture.

During the past five decades, Foulkes, who keeps a studio in Lincoln Heights’ Brewery art colony, has continued to play music—well enough that his funky collective, the Rubber Band, rocked on The Tonight Show in 1974. Back then he played percussion; these days he’s devoted to his Machine, a crazy, sofa-size instrument cobbled together from brass horns, drum pieces, a xylophone, and a one-string bass he plucks with his feet. On February 26 he unleashes the contraption on museum audiences. When he plays, he clangs bells, sings raspily, and for a moment seems almost happy. “Painting has been a little more of a torment,” Foulkes says, “whereas music has been more of a joy.”