Home Uncategorized Why Love and Math are Basically The Same Thing 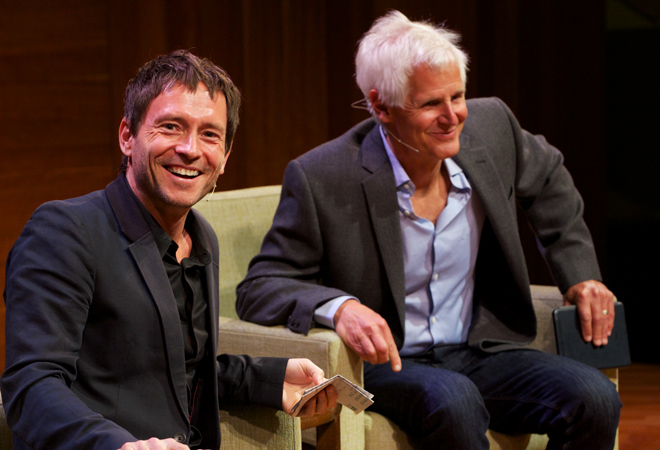 If you think the realms of passion and logic are polar opposites, think again. Last night as part of the L.A. Central Library’s ALOUD speaking series, mathematician Edward Frenkel (who once appeared nude in an erotic film about math!) was joined by The X-Files creator Chris Carter. The discussion wasn’t a wonky lecture about equations and formulas but a discussion about the pursuit of beauty and truth. Frenkel is the author of the popular book Love and Math: The Heart of Hidden Reality, which explores the notion that there may be an empirical formula for love. What does he think math and love have in common? Here are three takeaways from last night’s talk.

Revelation #1: Math and love are the only two languages every human being has the ability to speak. No matter your race, age, gender, or place of origin, the fundamental laws of mathematics are universal. Two people who don’t speak the same language and have nothing in common can still communicate through a shared understanding of math. One of the only other universal modes of expression is love.

Revelation #2: Math and love are both chaotic, risky, and uncertain endeavors. Many people see math as a bunch of set in stone rules, but it’s drenched in uncertainty—much like love and the search for an ultimate truth.

Revelation #3: Only we can hold ourselves back from learning math and from loving. Using children as an example, Frenkel spoke of how children often find it much easier to learn than adults because they don’t yet believe that it’s hard or that they’ll fail. Love works in much the same way. Frankel believes that humans have an unfathomable capacity to connect with love and beauty in ways that transcend time and space.

Sponsored by the Library Foundation of Los Angeles, ALOUD speaking series events such as this one take place at the L.A. Central Library and are free and open to the public.