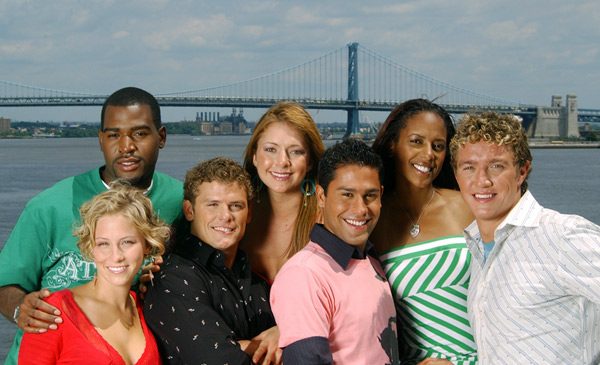 Karamo Brown never thought he’d return to MTV’s Real World house until Paramount+’s spinoff series The Real World Homecoming: New Orleans showcased there’s an opportunity to help his cast mates learn and grow from the traumas he experienced while filming with them almost 20 years ago.

“I wasn’t open until recently, but if they call me, I’ll move into that house in a heartbeat,” Brown told Los Angeles.

“I totally would do it, oh my gosh. If they want to make it happen, I’d totally go back into that house. This is the funny part, I watched the first couple of reunions and it didn’t make me feel like I wanted to go back into the house. Never, ever, ever. And then I watched the New Orleans one, and they came on in 2000 and that was the season that made me want to go on the Real World in the first place, and then I realized it did the same thing to me again almost 20 years later when I’m watching it, and I’m like, ‘I want to go back into this house,’ which I never thought I’d say,” he added.

“I actually want to because I haven’t seen my cast mates and there was an episode where cops surrounded me in a club and like pulled guns on me. This is in 2004 and my roommates were like you’re overreacting. This doesn’t happen in the world and it’s 2022 and I was in the airport recently and I saw one of my past cast mates MJ [Garrett], who I haven’t seen in 18 years and the first thing out of his mouth was, ‘Dude, I’m so sorry. I regret it all the time now that I didn’t say back then what I know now,’ and I was like, ‘Nope, we can’t have this race conversation because I have to get on my flight.’ But it did stick with me that I know that somewhere in the back of his mind, he realizes like the way he gaslit me and told me that I was overreacting was not right because now he’s seeing black men die in the streets. That kind of stuff I want to go back and confront.”

Let’s just go back and show the world you can grow and if not, I’m at a capacity now to help them grow. Back then, I was not.

Created for MTV by Jonathan Murray and the late Mary-Ellis Bunim of Bunim/Murray Productions, The Real World helped shape a generation and sought to spotlight culturally resonant stories like never before — including one of the first LGBTQ+ relationships documented on a TV series, the first televised same-sex commitment ceremony, and its unforgettable portrayal of Pedro Zamora’s battle with HIV. After spending decades apart, Paramount+ has been reuniting some of the casts of the series various cities to find out how the show transformed their lives since the cameras stopped rolling and to find out, once again, what happens when they stop being polite and start getting real.

“I want to talk about how I dated a Latino who was a lighter skin and people told me that I had issues with race and the crazy conversations that we had that people are still having today,” Brown said. “The way we talked about bulimia and anorexia with my roommates, the way that we talked about slut shaming and stuff like that. They gagged when I told them I was gay. There’s a scene where their jaws open up because they’ve never experienced a gay black guy and someone who was other than what they’ve seen on TV.”

Brown notes there are many other heavy topics he’d like to discuss that hits close to home such as gun violence. As a former student of Marjory Stoneman Douglas High School in Parkland, Florida, where a 19-year-old gunman opened fire killing 17 people and injuring 17 others in 2018, Brown was angered by the consistent mass shootings that have occurred in recent weeks. The TV personality is now encouraging more people to vote in the Primary Election, as well as more Republicans to join the fight for fair gun legislation.

“The first thing we have to do is vote. We have the vote and we have to vote smart,” Brown said. “That does not just go for our senators and our representatives and our president, because a lot of times we just look at that branch, but we have to look at the judges we’re voting in, the individuals on our local and city levels, and that’s something that we don’t pay attention to and there’s a reason. It’s designed for us not to pay attention to that so you don’t know who your judges are. That way you don’t know who’s making the budget for your schools. You don’t know these things and that’s how things get slipped through, so we have to pay attention and vote.”

“Secondly, it’s not up to me and it’s not up to any of the individuals who are liberal. It’s up to those people who identify as Republicans, who understand that kids dying of guns is not okay. For them to talk to their other Republican co-parts and fight,” he added.

“They’re not listening to me. I’ve learned that. We can be screaming until we’re blue in the face, so it’s up to you now. It’s up to you to talk. I will support you and cheer you on from over here, but all I can do is vote and continue to advocate and support. Republicans ain’t listening to me. They think I’m a liberal guy in Hollywood. It’s my friends that I went to high school with in Florida, where we had a mass shooting, who still identify as Republicans, who understand the pains of a mass shooting, who are advocating for comprehensive and common sense gun legislation. It’s their job to fight louder because they get into those rooms that I’m not invited. So I’m calling on those individuals to get to work.”