Home Uncategorized Who is Cool Disco Dan? A New Documentary Finds Out 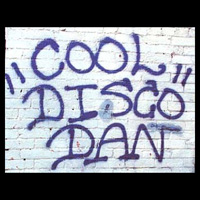 Beginning in the 1980s, the Washington D.C. area was deluged with the graffiti markings of “Cool Disco Dan” on buses, walls, buildings, and railways. It was nearly impossible to turn a corner without seeing the moniker. But who was Disco Dan? The documentary The Legend of Cool Disco Dan, narrated by D.C. native and punk rock icon Henry Rollins, finally answers that question.

Dan Hogg got his nickname “Disco Danny” from a TV episode of What’s Happening in which Rerun enters a dance competition. Inspired by his father’s record collection, Dan practiced drawing the album covers, amping up his skills for what would become his calling. After suffering the loss of his father at age 13, Dan’s attitude shifted (relatives say he’s never been the same). He wanted to be famous, so he began scrawling his name in public places. He mostly used a triple name stacked style that would came to be known as “Go Go” or “D.C.” and soon infiltrated most neighborhoods in D.C. His graffiti script was influenced by the Go Go scene. A developing subgenre of funk that originated in Washington D.C., Go Go music blended R&B and early hip hop with call-and-response, a combination that was unique to the region. It peaked in popularity during the 1980s with hits like “Bustin’ Loose” and “We Need Some Money” by Chuck Brown, considered the “Godfather of Go-Go.”

The film not only showcases Dan, it explores D.C. during the ’80s and ’90s, when the crack epidemic was crippling the city. Against a backdrop of murder and violence, tagging crews and neighborhoods were unified by the burgeoning Go Go scene. In 1984, the highly publicized murder of 49-year-old Catherine Fuller, a mother of six, was blamed on a local crew and the good times came to an end.

Somehow Disco Dan managed to stay above the fray. Unlike many of his contemporaries, he never got involved with drugs, alcohol, or violence although he spent 14 months in a mental health facility in San Marcos, Texas, something Dan still struggles with. Through the years, Dan has gone in and out of what he calls retirement but his status as a local legend has never wavered. The younger taggers interviewed in the documentary talk about the impact of his name and how much it means and influenced those even to this day.

Dan still lives in D.C. though he prefers to float around, never setting up a permanent residence. His only real home is in the hearts of the people and on the streets of D.C.

The film has been screening around the country and is also available for direct download, rental or DVD purchase at Cool Disco Dan. 500 limited copies will have signed postcards by Cool “Disco” Dan.