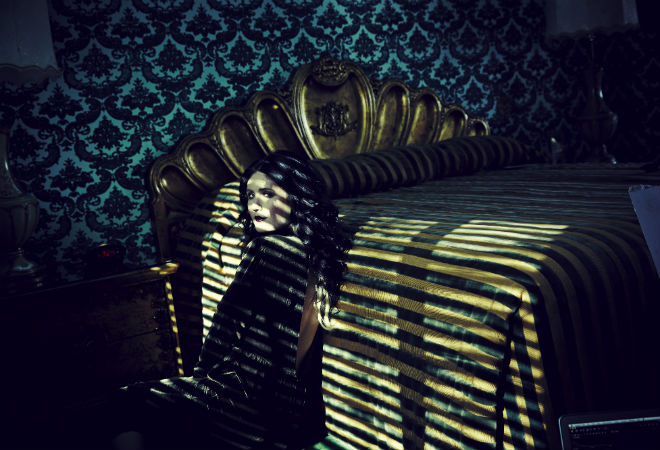 Before launching her solo career, Morgan Kibby was primarily known for her collaboration with French synth pop group M83 and as frontwoman of L.A. indie band The Romanovs. Since 2010, she’s been producing music on her own under the nom de rock White Sea, but she only recently began performing her tunes. “It was so exhilarating playing that first show with White Sea. I can’t wait to do more,” Kibby says.

The 29-year-old singer and producer’s excitement about that first concert in February at the Fox Theater in Oakland is a far cry from the all-consuming pain that compelled her to write her first White Sea album, In Cold Blood, in the back of M83’s tour bus. Kibby is open about the fact that In Cold Blood is a breakup album. “I had to make a choice to not be afraid to let it all hang out,” she says. “It sounds dichotomous but when I make myself vulnerable, I don’t feel vulnerable.”

White Sea’s grandiose New Wave-influenced synth pop has created quite the buzz already. Catch her performing with Moses Sumney at the Bootleg Theatre on Monday, March 17.

❁ Kibby is a Renaissance woman. The mile-long list of artists with whom she worked is impressive, especially since she hadn’t considered music as a career path until 10 years ago.

❁ Kibby was a child actor who grew up in San Francisco and moved to L.A. at the age of fourteen. “I was in a show on Nickelodeon and I had a bunch of guest appearances on lawyer shows,” she says.

❁ Kibby played the piano as a child but music didn’t become her primary means of artistic expression until she completed work on a friend’s film. “I was really tired of not being able to be creatively proactive,” she says. “I wanted to be able to make art whenever I felt like it and not be dependent on other people.”

❁ Independence is key for Kibby, who controls every aspect of her creative output, from writing to producing to performing. Four years ago, when Kibby recorded and released her first EP, This Frontier—which represents an old iteration of White Sea—she wanted to figure out how to produce tracks on her own. Becoming technically proficient was a long journey. She taught herself the trade by remixing the music of indie darlings Lord Huron, Swedish folk rockers Junip, and The Naked and Famous, to great acclaim.

❁ When it was time to record In Cold Blood, Kibby realized that she was capable of doing it on her own. “I had that same impulse telling me to find a producer to work with,” she says, “but then I realized I was really already doing that myself, and that I had a really clear idea of what I wanted the record to sound like.”

❁ The new album will be out sometime in April, or maybe May. Kibby, who cites Prince as a major source of inspiration, performs with a drummer and a multi-instrumentalist while handling the keyboards and singing herself. “I am a singer through and through. Singing is such a physical experience of joy for me and getting up on stage and sharing that with people feels incredible.”

❁ “I’m definitely an advocate for more women producers,” Kibby says. “No one’s ever told me, ‘Hey, you can’t do that,’ but no one’s ever told me that I could do it either. Realizing that you’re more than capable of doing things on your own is a very empowering feeling.”