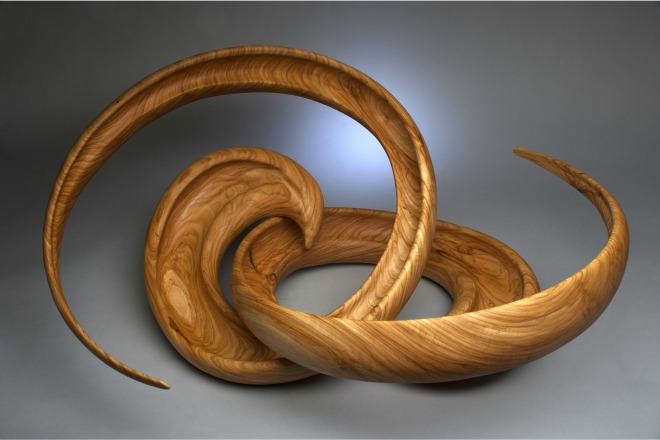 Long after “The personal is political” became a rallying cry for feminists, it could easily be co-opted as a slogan for the textile industry. Perhaps nothing is more personal—or political—than the clothes that touch our bodies.

The Craft Art and Folk Museum explores the intersection of gender, money, and power in Social Fabric , an exhibition running through May 5. Curated by Anuradha Vikram of UC Berkeley’s Worth Ryder Gallery, the collection blends social critique with civic engagement, inviting visitors to participate in the works on display.

Stephanie Syjuco’s “The Counterfeit Crochet Project” challenges capitalism and copyright by collaborating with global crafters to make woolly versions of luxury handbags by Chanel, Louis Vuitton, and Yves Saint Laurent. At a nearby workstation, visitors can try it themselves. “Frau Fiber,” a.k.a. Carole Frances Lung, repurposes used textiles to make non-gendered outfits that then feature in her performances. These happenings coincide with major events in textile history like the Triangle Waist Factory fire, which killed 146 workers, mostly women, in 1911.

The U.S.’s recent wars also feature prominently. The Combat Paper Project invites veterans—or their families—to recycle old military uniforms into paper. These pulped, blank “portraits” form their own display or become the vehicle for typed poems and confessions from the museum’s patrons. Across the room, a series of soft gas masks accompanies an anonymous portrait gallery of hooded combatants—the product of Allison Smith’s work teaching veterans to sew.

Betye Saar’s Washboards Are an Artistic Act of Defiance

Berlin’s Sprüth-Magers Opens on Museum Row, but They’re Not Just Following All of the Other International Galleries