Home Film When He Wasn’t Working in the ER, Ryan McGarry Was Making a... 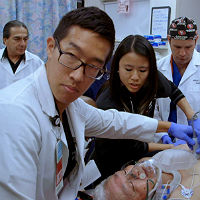 Each year seems to bring another documentary about some aspect of our health care system. The movies invariably deal with some flaw in the system, sometimes with suggestions on how to fix it. The latest is Code Black, and it isn’t just an American story but a distinctly Los Angeles one. In 2013 the film won the jury award for best documentary at the Los Angeles Film Fest, and this past weekend it opened in select theaters.

Code Black has a unique perspective since it was directed by an emergency room doctor. Ryan McGarry started shooting the film in 2008 at the same time he began his residency at the Los Angeles County+USC Medical Center. Through his lens, we get to see the emergency room as the movie’s war zone. It’s full of horrifying imagery, including a spur of a moment open heart surgery, as one gruesome case after another comes through the doors. Clocking in at a brisk 80 minutes, Code Black devotes little time to the doctors themselves and instead focuses on how they handle the high-pressure situation.

McGarry’s timing was fortuitous. In 2008 the debate about a nationalized health care system began to heat up. The recession exacerbated problems that had long been festering, which made it a hot button election issue. Local events also shaped Code Black; the scenes McGarry depicts resonate with larger topics in ways he probably couldn’t have imagined.

McGarry was among the last batch of doctors to work at the old County/USC building, an art deco behemoth known as the “Old Stone Mother.” Built in 1923 it’s instantly recognizable thanks to its numerous appearances in film and television (most notably in the opening credits of General Hospital from 1975 to 1993). New safety regulations enacted after the Northridge earthquake meant the building was no longer up to code. A billion-dollar facility was constructed next door, and in 2008 all services were transferred to the new hospital. McGarry’s camera captures it all, from working in a cramped ER to moving into state-of-the-art digs. But the transition isn’t entirely positive.

Los Angeles County General, the movie proudly tells us, is where modern emergency medicine was born. Specifically, the “C-booth” (there’s no agreement on exactly what “C” stands for though it probably means “critical”), a small, out-of-the-way ward for patients in the most intense, immediate danger, was revolutionary. As Marc Eckstein, a former doctor at the hospital who is now the medical director of the Los Angeles Fire Department, wrote in a 2008 op-ed in the Los Angeles Times, “more blood spilled on this floor than any other space in any hospital in the United States.” But it’s different in the new building.

All the futuristic gizmos come with intimidating heaps of paperwork. The way Code Black tells it, doctors spend more time filling out papers, which means they have less time to devote to patients. The switch from the Old Stone Mother to a place so fresh it hasn’t yet earned a moniker is a microcosm of the larger shift in America’s health care system. In the current system, the documentary tells us, doctors and hospitals are suffocating under the weight of a crushing bureaucracy. While the problems McGarry depicts aren’t unique to County/USC, he offers a glimpse of how the system has shifted–and that sets Code Black apart from similar documentaries.