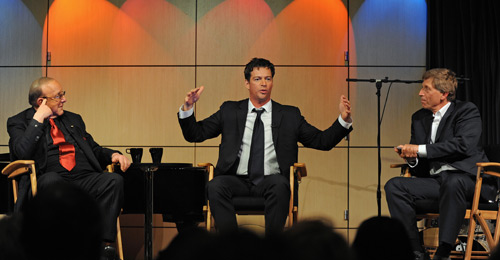 What makes a hands-on recording artist like Harry Connick Jr., who has written, arranged, produced, mixed, and mastered the majority of his music, agree to collaborate for the first time with a new producer midway through his career? A phone call from Clive Davis.

“I’ve been dedicated to the idea of showing how long great songs can last,” Davis explained at The Grammy Museum’s An Evening With Harry Connick Jr. and Clive Davis to benefit MusiCares last Wednesday night. “To me, Harry Connick Jr. is the best contemporary pop singer in the world today. I called him.”

It’s a good thing that he did. After that, Connick and Davis set to work, meeting for hours each Wednesday for six months to record and produce Your Songs, a collection of 14 standards like “Just The Way You Are,” “Besame Mucho,” and “All the Way.”  Performed at the event, “Mona Lisa, “The Way You Looked Tonight,” and “And I Love Her” were thoughtfully reinterpreted: “All the Way” was jazzy and cool, “The Way You Looked Tonight,” somehow more romantic for it’s toned-down instrumentation.

And yet, Connick was most entertaining when he was just being himself, chatting onstage with Davis and Grammy Museum executive director Robert Santelli about his career and inspirations.  He talked about growing up in New Orleans where he was mentored by James Booker and Ellis Marsalis, and how challenging it was to take on songs recorded by Nat King Cole and Elton John. He even jokingly solicited Jimmy Jam, who was in the audience, for work.

Davis was equally revealing. Turning to face the room, he talked about breaking into (and subsequently taking over) the record industry, working with Whitney Houston, and how and where he finds new artists today (“It is identical to what it has been”).

Hearing Connick and Davis’s modern day love story was most touching of all. To hear them tell it, they were excited to get together, struggled to learn each other’s language, and developed a meaningful, if unlikely, friendship along the way. “I sing for Clive,” Connick said. That’s the stuff of standards.