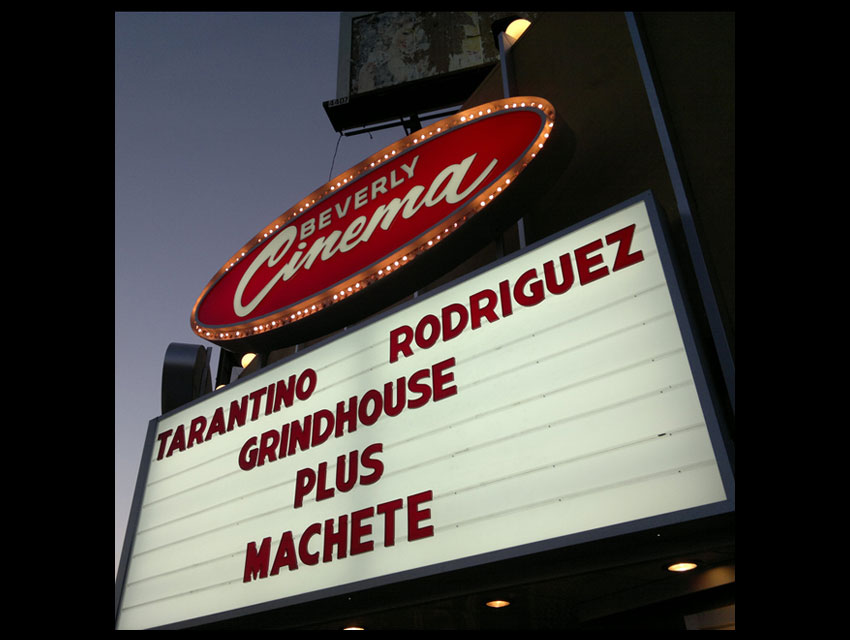 In 2007, Quentin Tarantino quietly bought a building at the corner of La Brea Avenue and Beverly Boulevard. But his ownership of the New Beverly Cinema remained a secret for three years. Since “coming out” in 2010, he has invited famous friends and fellow film buffs like director Edgar Wright (Shaun of the Dead) to curate mini-festivals and screening series. In late August of this year, Tarantino decided he wanted to take a more hands-on approach.

After controversially ousting manager Michael Torgan, who had run the theater since 2007 (and whose father Sherman had run it since 1978), Tarantino closed the revival house and spent a month renovating it.

On October 1, the New Beverly emerged like a butterfly from its chrysalis and reopened for business with a fresh coat of paint and a new programmer: Tarantino himself.

Some stars collect expensive cars and exotic homes; Tarantino prefers film reels. His personal collection is rumored to contain more than ten thousand movies. Most of the prints screened at the New Beverly will come from the filmmaker’s private archive. And they will be prints. The theater will only screen celluloid; a digital projector that was briefly installed before the makeover is gone.

Physically, Tarantino hasn’t made any drastic changes to the building’s facade or interior. Longtime patrons won’t have any trouble recognizing the New Beverly. But the theater does have all sorts of upgrades, large and small.

The walls are covered with fresh coats of paint. The old, faded carpeting has been replaced with crisp blue carpets. The seats have been reupholstered. The building, which was definitely showing its age, feels rejuvenated. A superfluous wall between the door to the ladies’ room and a stairwell has been removed; it’s a small change, but it does wonders for making the lobby seem larger and more open. The concessions area, once a tiny nook, has been expanded to fill unused space in the back of the theater. The low prices of the snacks remain unchanged; the New Beverly still boasts the cheapest candy, drinks, and popcorn of any theater in L.A.

The changes are small but effective and they extend to the technical aspects of the theater. The sound and picture systems have been tweaked. A 16mm projector has been added. The projection booth now has an automatic masking feature that makes it easier for the projectionist to adjust the image for various aspect ratios. Those are the kind of improvements that only diehard fans will notice, but then, the New Bev has long been a haven for just those kind of moviegoers.

That obsessive dedication to movies, both obscure and well-known, is obvious when looking at the calendar, which is available on the revamped website. October’s lineup includes 20th anniversary screenings of Pulp Fiction and The Professional, 1940s comedy classics like Morocco and His Girl Friday, grindhouse series The Big Boss (both Part I and Part II), and martial arts action flicks Lightning Swords of Death and Shogun Assassin. In other words, a lot of the same movies you might’ve seen at the revival house B.T. (Before Tarantino).

As Tarantino told LA Weekly: “If you’re not worried about packing the house because you can’t make your rent, then you can have a lot of fun,” says Tarantino. “If people come, fine. If they don’t, fuck them.” It’s good to be the king. Tarantino hasn’t made any seismic changes. He’s just fine-tuned the experience of the New Bev.