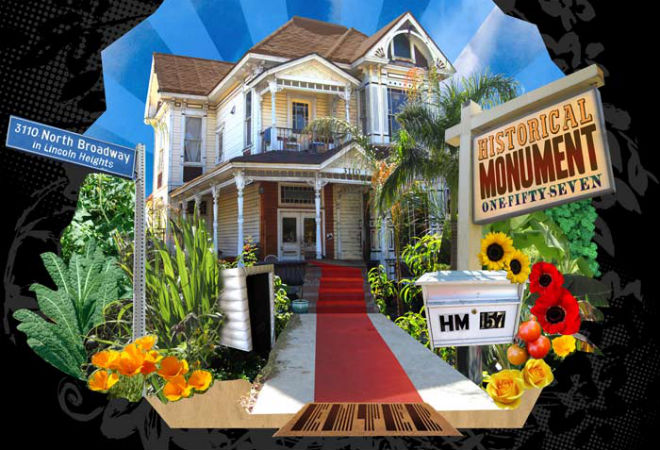 HM157, an oddball performance space operating out of a ramshackle Victorian in Lincoln Heights, is turning into a non-profit. To pay for the paperwork the transformation requires, the venue is kicking off fundraising efforts with a new monthly salon series, Dadaismus, which starts January 18 and will feature a mix of DJs, musicians, belly dancers, stand-up comedians, puppeteers, and literary readers.

Short for “Historical Monument No. 157,” HM157 has been hosting concerts, literary salons, and art performance, since 2008. If you’ve ever wanted to see a white witch exorcise greed and fear from the three branches of government (good luck with that one) or felt the urge to see a variety show featuring everything from magic tricks to face-melting free jazz, HM157 is the place for you.

Now, the artists’ cooperative and community center-cum-underground event space is going legit. According to co-founder and event manager Charon Nogues, this will allow HM157 to keep throwing kooky cool events while broadening its community outreach efforts.

“HM157 was never meant as a venue but the artists involved kind of made it that,” says Nogues. Six years ago, she and her artistic partner, Reid Maxwell, were looking for a suitable live-in art studio for Maxwell and his fiancée when they “just happened to drive past that huge house.” Even with a vintage boutique on the ground floor, rent proved to be too expensive, so Nogues and Maxwell brought in other artists to share the space. “It’s not a commune,” Nogues stresses. “It’s an artists’ cooperative.”

“We’ve had all kinds of performers here. A couple of years ago Michael Yonkers, who was big in the seventies, came out to play. He’s from Minneapolis and he never travels, so that was a big deal,” Nogues explains. “We book a lot of avant-garde and experimental music that none of the big venues can make money off of and therefore don’t do.”

HM157 has more to offer than just concerts and events; at its core, it’s a community center offering everything from square dance classes to music lessons for children. “We hold a lot of workshops here, and becoming a non profit will allow us to start paying our teachers, among other things,” Nogues says. Up to now, everything has been funded out of Nogues, Maxwell, and the other artists’ pockets. “There’s a huge deficit in Lincoln Heights as far as entertainment and community events go,” Nogues says. “It’s our hope that we can keep connecting artists with the community. It’s sorely needed here, especially since schools offer less and less in terms of art education for children.”

“I’d love to be able to offer more classes. Circuit bending and building your own instruments isn’t something they teach you in school. That’s the type of thing we can offer,” she says.

Non-profit status will also help the venue attain temporary permission to sell alcohol at certain events*. “We don’t really want to be a bar. We’re not trying to be the new Echo or something like that,” Nogues says. “But people like to have a beer with their music.”

Dadaismus also marks the beginning of a collaboration with Michelle Carr, cofounder of legendary ’90s punk club Jabberjaw, who will curate the series. Performers include Prince Poppycock of America’s Got Talent fame, former Jesus Lizard frontman David Yow, who will read from his new The Jesus Lizard Book, new wave vaudevillians Ann Magnuson and Kristian Hoffman, and Diamondback Annie, the queen of rock n’ roll burlesque.

Whether or not HM157 receives nonprofit status is up to the gods of city government, but the Lincoln Heights artists’ cooperative will carry on regardless. As Nogues says, “We are kind of a maverick initiative.”

*An earlier form of this article incorrectly stated that non-profit status would enable HM157 to acquire a liquor license. In fact, HM157 simply seeks the right to apply for one-day liquor permits through non-profit status.

In a Series of Photos, Young L.A. Artists Capture the Experience of Growing Up