Home Entertainment What To Stream This Weekend: ‘The Book Of Boba Fett,’ ‘The Lost... 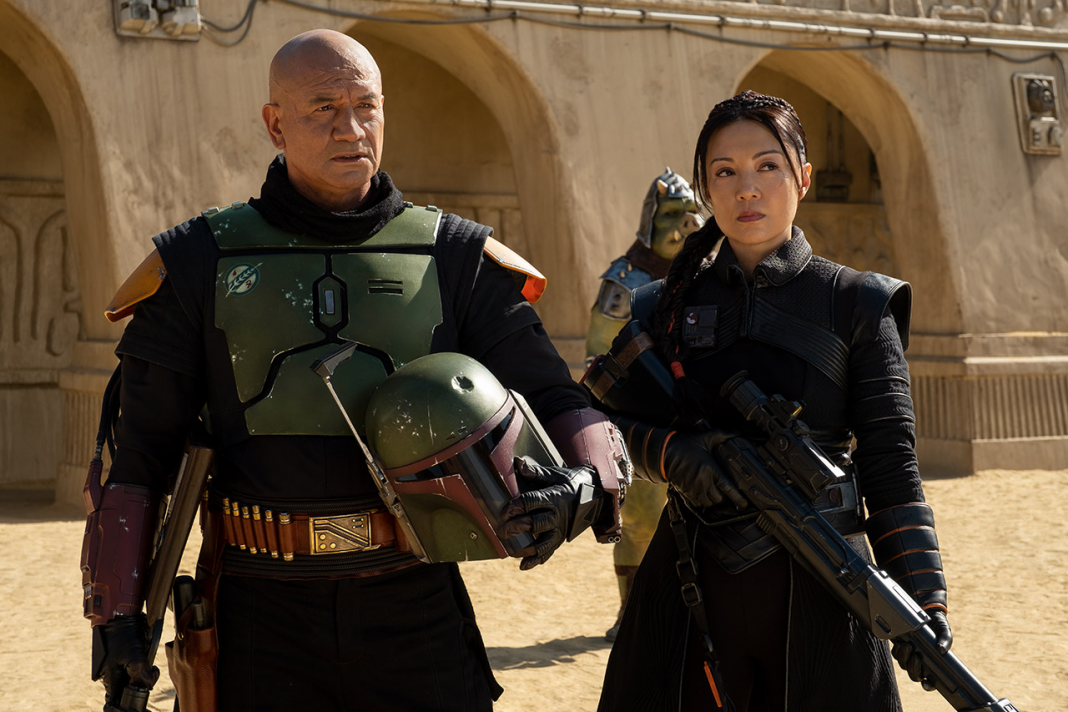 Here are the best new titles to check out as we mentally prepare for that tumultuous return to work next week.

As someone who has never seen a single Star Wars title (don’t dox me), I may have a hard time explaining this one because I don’t have a clue as to who anyone is. But this new Lucasfilm series focuses on (surprise) Boba Fett, a bounty hunter, and Fennec Shand as they try taking over a territory once controlled by Jabba the Hutt. Sounds like a cute ol’ time. The reviews have been rather tepid — sitting at a 60 on Metacritic. Critics tout the first episode as filler, with “character development play[ing] second fiddle to fights, and lots of them.” Perhaps this will still whet the palette of those fans eagerly anticipating the next season of The Mandalorian. 12/29 on Disney+.

Awards darling The Lost Daughter finally (finally!) lands on Netflix tomorrow, and for those of you who were unable to catch it in a theater, grab those remotes (or mousepads, I guess) stat. Maggie Gyllenhaal’s directorial debut–which she also adapted from the 2006 Elena Ferrante novel–has been nominated for everything under the sun and most recently won Best Feature, Screenplay, and Lead Performance (Olivia Colman) at the Gotham Awards. To say this is a promising start for Gyllenhaal is the understatement of the century. Seeing a talent also in such control of their craft is remarkable. “Every decision she makes is the right one.” And the three leads–Colman, Jessie Buckley, and Dakota Johnson–completely radiate on screen. It’s beautiful to watch. 12/31 on Netflix.

The fifth (of fourteen!) Harlan Coben/Netflix series lands on the platform this week, this one being the second out of the United Kingdom (previous titles stemmed from Poland, Spain, and France). Stay Close stars Cush Jumbo (The Good Fight) as Megan, an average soccer mom on the surface, whose past comes to haunt her and expose her secrets and maybe someone dies, maybe someone goes missing, gets found, goes missing again. It’s Coben, after all. Critics haven’t touched this one yet, so unsure of its promise, but if it’s in line with Coben’s previous series, it’s bound to be pleasant hangover fodder for New Years Day. 12/31 on Netflix.

Whew, do I feel old. Harry Potter gets its 20th Anniversary Special on HBO Max on the first (the third reunion for HBO Max after Friends and The Fresh Prince). And it’s looking to have the “For The Fans Only” vibe to it, feeling like a tacked-on epilog to this two-decades long story. If you’re down for two hours of nostalgia and feeling bad your childhood is long, long gone, go for it. The Wall Street Journal put a nice visual to it: “By the end, they will feel as if Dementors have swept in and sucked the joy out of their souls.” Trigger warning: JK Rowling makes an appearance. 1/1 on HBO Max.

Hilda and the Mountain King

Criminally underrated and underseen Hilda gets her very own Netflix movie in Hilda and the Mountain King. When we last saw Hilda in the season two finale, her soul found itself stuck in the body of a troll. This new feature follows her attempt to correct the situation, all the while discovering what caused this huge rift between the trolls and the humans of Trolberg. Hilda creator Luke Pearson told Animation Magazine that while the movie doesn’t have one big message, “it has things to say about conflict, empathy, politics, family — about situations without easy solutions […] themes which should feel relevant and familiar now,” and teases a satisfying culmination of the past two seasons. 12/30 on Netflix.

Around the World in 80 Days (Series Premiere)

The first Masterpiece of 2022 comes in the form of Around the World in 80 Days, which was originally planned as a miniseries, but has since received a second season order. David Tannant stars as the exuberant Phileas Fogg, a man who, as we all know, tries to circle the globe in 80 days. The series takes a few liberties and makes some healthy changes to the original Jules Verne novel. It’s a “great period series to escape to,” according to Forbes. And escape is just what we need. 1/2 on PBS.