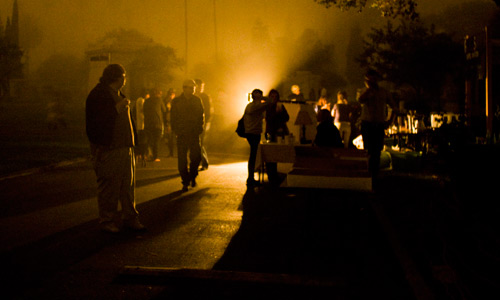 The office was quiet yesterday—it seemed like everyone who wasn’t out of the office observing Yom Kippur was recovering from Bon Iver’s sold-out sunrise concert at Hollywood Forever Cemetery on Sunday morning. We got together (after some coffee) and relived the night. Here’s what four concertgoers will remember:

It was surreal from the get go, the thought of staying up all night in a cemetery. But as I walked into the Hollywood Forever Museum at 5 a.m. on Sunday I was sorry I didn’t arrive at midnight when the doors opened like 2,500 or so other people did. I stumbled wide-eyed through the fog, looking at the stately obelisks to those that went before us (and the many new tacky monuments for those who have yet to go). It was an eerie and silent stroll to find my friends and my place on a blanket, and I was grateful that once I arrived it was perfectly acceptable for me to curl up and lie down. Even as the music started, that was the best way to take in the ethereal, choral musings of the band, which is basically the brainchild of indie folkie Justin Vernon. The concert itself capped off an evening of films and music chosen by Vernon. Then the band played from his one album of beautiful, plaintive, and heart breaking songs as the sun came up and the sky changed from gray to white to peach to blue. The palm trees loomed tall and watchful above us. Then he let us know “There’s just one more song we know how to play” and asked the audience to sing along to “The Wolves (Act 1&2).” As the entire audience repeated the line “What might have been lost” over and over, the sky became light in what was a contrary experience to so many outdoor concerts that have gone before it; I left able to see those around me better than when I arrived. There is only one word to describe the locale, the layered sounds, and the light: magical.
-Julia St. Pierre

Everyone wants to witness a piece of history—indie rock fans especially. There is no greater validation of love for a band than those simplest of words: I was there; I saw them live. With the 40th anniversary of Woodstock having come and gone, I’ve been looking to claim attendance at a world-changing event of my own.

Hollywood Forever Cemetery pins the number of attendees of their Bon Iver show at nearly 2,500, and because I was there I know they witnessed something heretofore unseen. The details seem absurd: thousands of warm bodies watching movies, drinking wine, and sleeping above ground in a cemetery for hours. But after the show, as the sun revealed the Santa Monica mountains and people shuffled sleepily off to their cars, the idea of a concert at 6 a.m. didn’t seem so absurd anymore; It seemed like history.
-Forest Casey

My roommate and I arrived at the cemetery a little after midnight and queued up at the gate, where the crowd was already three rows deep. The wait wasn’t as bad as we had expected, and we passed the time speculating which films Justin Vernon had selected for the all-night program. We hoped that, given Vernon’s refreshing lack of pretension, he had picked some ‘90s straight-to-VHS masterpiece. Gauging by our present company and the overwhelming number of geek glasses, we joked that Wes Anderson and a serious documentary were probably in store.

The moment we entered, we were handed cards printed with the event schedule. Bottle Rocket and Planet Earth. We congratulated ourselves on being geniuses.

We were directed through the cemetery toward a clearing framed by trees and a vast white wall. We made a pit stop by the coffee bar (it’s supply was free throughout the night) and then headed toward the concert site—the biggest hipster sleepover of all time. Chairs and tents were banned (the people in front of us set up a couple of folding chairs and were promptly asked to take them down) so groups were sprawled all over the lawn on blankets and sleeping bags and a Planet Earth segment on birds played soundlessly on the wall/screen. I was determined to stay awake all night, but by the time I had settled down I took a minute to contemplate how singular this experience was going to be and fell asleep watching geese migrate.

I woke up to Buddhist monks chanting around 5 a.m. The otherworldliness of that moment combined with the anticipation of dawn made for an incomparable opening act. When Bon Iver took the stage, the mellow audience stayed put in their cocoons, letting the music reach them instead of jockeying toward the front. Feeling atypically brave and wanting to take advantage of the scene, my roommate and I stole our way along the sidelines to get a better view.

Granted, the sound wasn’t the best from behind the speakers, but the proximity to one of my favorite bands was compensation enough. I could see every expression on their faces, the labels on their beer bottles, their (sigh) wedding rings.  I had gone to the Bon Iver concert at the Wiltern only a day and a half before, and I saw them perform in Denver in July and appreciated the intimacy of the smallish venues. But here, I was nearly backstage. From here, the music was tangible.

No doubt, it was a strange night, and Vernon acknowledged it himself. When would any of us do such a thing again? We slid into the daybreak together, lamenting along with him in “The Wolves (Act I and II)” and intoning our own chant in Megafaun collaboration “Worried Mind.” The morning fog eventually lifted, but I think I took some of it home as a memento, a reminder of a time when nothing but the music made sense.
-Debbie Kim