Home Uncategorized What Makes One Direction So Beautiful? 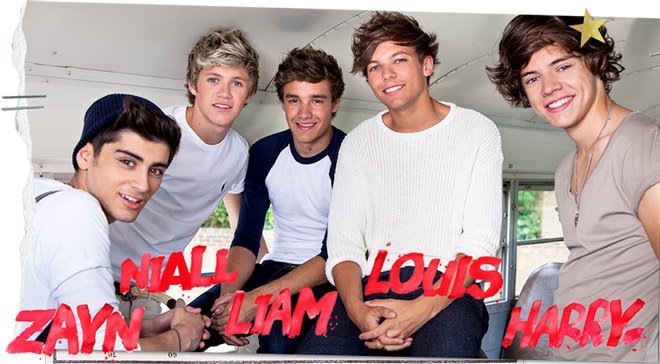 Sure, swarms of pre-teen girls are smitten with boy band One Direction, but there’s one middle-aged British man who matches their obsessive devotion. Although journalist James Desborough doesn’t fit the profile of a typical 1D fan, his admiration for the teenybopper quintet is geniuine. His recently released book, One Direction… What Makes Them Beautiful, is billed as a “fanual” that chronicles the rise of the band. For those who don’t know, the band members met in 2010 as individual competitors on the British version of The X Factor. After joining forces to go in “one direction,” they won third place and signed to Simon Cowell’s label, Syco Records. Their mega-succesful single “What Makes You Beautiful” is so ubiquituous that probably not a minute goes by when some radio station isn’t playing it.

Desborough is no stranger to the media blitz. He was the former U.S. editor of the U.K. tabloid News of the World until it ceased publishing in 2011 due to a massive phone hacking scandal. Along with more than 40 NOTW reporters and editors, Desborough was arrested as part of the investigation. Unlike some of his cronies, he was released and cleared of all charges.

As a media commentator who has extensively covered pop culture in the U.K., Desborough likens One Direction to that other British boy band, The Beatles. He isn’t shy about divulging romantic details, speculating on a Taylor Swift and Harry Styles union by the end of this year (break a million hearts, why don’t you?). And he contends that One Direction, which has changed the face of the music industry, will go on to make history.

Writing a book about One Direction with unlimited access to the band is probably every teen girl’s dream. What drew you to this project?
Thank you very much for that interesting likeness to a teen girl. The reality is, even from the perspective of a long-standing show biz reporter, 1D has changed the way pop bands come about. In the last two years they have achieved what bands like The Beatles, Led Zeppelin, and the Rolling Stones never did: two albums straight in at number one. Just being on The X Factor and the effects of social media have changed the way bands promote themselves.

How has social media contributed to their overall success?
One Direction is as groundbreaking as The Beatles. No boy band has ever cracked the world in such a short amount of time and with such success: financial, critical and awards-wise. It’s solely down to the extraordinary way their fans have spoken through social media. The YouTube videos of their X Factor performances were getting more views around the world than the TV show. Social media has been the lynchpin of all this; this will be the basis of every single record company that launches a band.

They way the band came together is somewhat unconventional. What do you think makes them stand out as being more than just a boy band?
When they were put together by Simon backstage during the bootcamp stage, it was all about Louis’ shoes. They all said, “Whatever we do, we’ve gotta have shoes like Louis’ cause they’re really cool.” That kinda sums it up. It wasn’t a hardcore marketing strategy in the beginning it just fell in organically. They are five guys that are like your brother or best friend. For girls, they’re like the guy you want to date. They are good-looking, funny guys who are always joking. In their early days, Louis said he loves girls who love carrots and at their first gig 20,000 people turned up with bags of carrots. It’s that kind of squeaky-clean, fun-loving, boys-next-door appeal.

What do you say to people who disregard boy bands?
Mick Jagger has said he sees them as a young version of what the Stones were. I believe in maybe a year’s time we’ll get a big single from the band. We’re waiting for that iconic song for them that will make people go, “Actually, their songs aren’t bad.” Don’t be surprised if in 2014 they start playing in stadiums like the Stones. Don’t be surprised if in four or five years they take a break and do solo records, but they’re not going anywhere. The success of this will guarantee them a reunion any time. The music is power pop, but it’s songs that everyone likes. People may cringe when I say that, but it’s straight up and down old-fashioned good pop songs.

With One Direction constantly being compared to The Beatles, how do you feel seeing a British band achieve this level of success in the U.S.?
British music has always been the epicenter of cutting edge things in the U.S. From The Beatles, Led Zeppelin, and Queen, we’ve always had a presence here. Even though it’s boy band pop music, it’s nice that the talent we have is being recognized. There have been a lot of great English bands like Oasis and Take That that haven’t managed to crack America in the last 20 years. It’s great that we have a pop-band in the epicenter of American music.