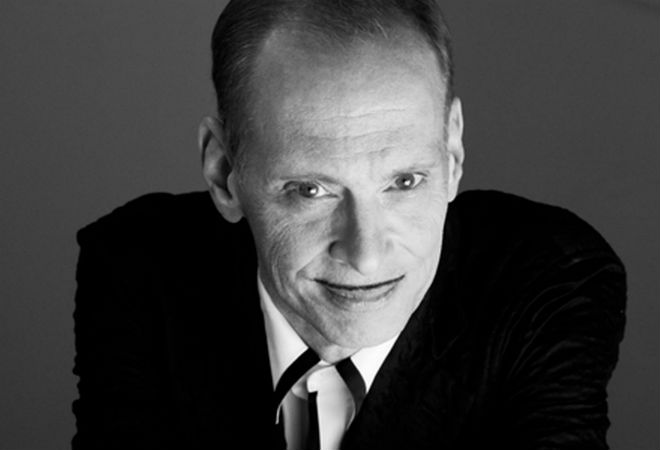 On Monday, February 24 at The Orpheum Theatre, The Broad will present The Un-Private Collection, a conversation between two of American culture’s most cheerful enfants terribles: filmmaker John Waters and artist Jeff Koons. The indie filmmaker, known for directing cult classics Pink Flamingos and Female Trouble, will interview Koons about his three decades making art including controversial pieces such as the 1990 series Made in Heaven, which featured sexually explicit images of his now-ex-wife, Italian porn star Ilona Staller (AKA Ciccolina). Though the event is sold out, we spoke with Waters about the nature of confrontational art, his love for Koons’s work, and how he teaches minimalism to third graders.

How did you first come across Jeff Koons?
I discovered his work well before I met him. I saw many of his early shows in SoHo, the ones that rocketed him to attention, especially Made in Heaven, which wasn’t received very well by the critics. I saw the amazing reaction it got from the public. It was like Justin Bieber was in the room. There were lines around the block to get in. It was amazing, beautiful, shocking, and confusing, but it was first and foremost new, and “new” is what Jeff has always been about.

What sets him a part from other artists?
Sometimes his work makes you wonder whether or not he’s serious about what he’s saying; he is. His work is serious, and it causes a lot of trouble and confusion. He’s a magician. I think all good artists are. He makes you think and astounds you. His works look simple and easy to understand but they’re not. They look clean and new and they’re often about childhood, but are they innocent? Are they cute? I don’t think so. Cute can be deceitful. On first sight, his work is so deadpan that you enjoy it; then you begin to question it. It’s impenetrable in the way that contemporary art should be.

Impenetrable?
I’ve always said that you should buy contemporary art you hate before it hates you. You initially react against the work that changes everything. Then you think about it and you realize that it changed what came before it. This isn’t just pop art. It takes it into a new realm. It’s anything but campy, which pop art originally was.

What about Koons’s work appeals to you personally?
The faux happiness. The confusing innocence that we all know can break down. People who hate contemporary art always say, “My kid could do this.” Well, your kid couldn’t do this, but your kid would like it, and that’s even weirder.

All children like contemporary art—if they haven’t been turned off to it by their parents. I teach a third grade art class in Baltimore. I just taught the kids about minimalism. I showed them a bunch of Cy Twombly drawings, which they didn’t question at all. Adults get furious a lot when they see his work.

Do you see any parallels between yours and Koons’s work?
I’m very humble, but I will say: When Jeff was in art school in Baltimore in 1972, I was making Pink Flamingos. We didn’t know each other but we were both planning trouble. My early films caused some trouble as did his early works. Art is supposed to. That’s the whole point.

Is that what you’ll be asking him about during the Un-Private Collection talk?
I never reveal my questions. I didn’t ask you for your questions when you called me up, did I? We want to keep it spontaneous. That being said, Jeff and I are very friendly with each other. I’ll probably ask him questions that he hasn’t been asked before. That much I can reveal.

Koons often uses a big team of people in his artistic process. As a filmmaker, can you relate to that?
Art as a craft is being reevaluated. You can be a great painter and a terrible artist at the same time. In Cecil B. DeMented, I had one of my characters say, “Technique is nothing more than failed style.” The fact that Jeff gets other people to work for him on his art makes it even better because it twists the idea of what art is supposed to be. Technique is not enough anymore. It’s the way you use it in the magic trick that matters.

Do you have a favorite Koons piece?
Probably Michael Jackson and Bubbles. It’s certainly the scariest. Does he have three arms? I can’t tell. It’s deadpan and shocking, but it’s mainly frightening in a very beautiful way. I’m definitely for confrontational art.

Is Koons confrontational?
I think so but I’m not sure people realize it because his subject matter has that veneer of cute. The worst possible reaction to a piece of art is when people coo, when they go, “Oh, how cute!” That’s the amazing thing about Jeff’s work. It’s confusing and threatening and I think the people who look at it and coo haven’t looked deep enough.