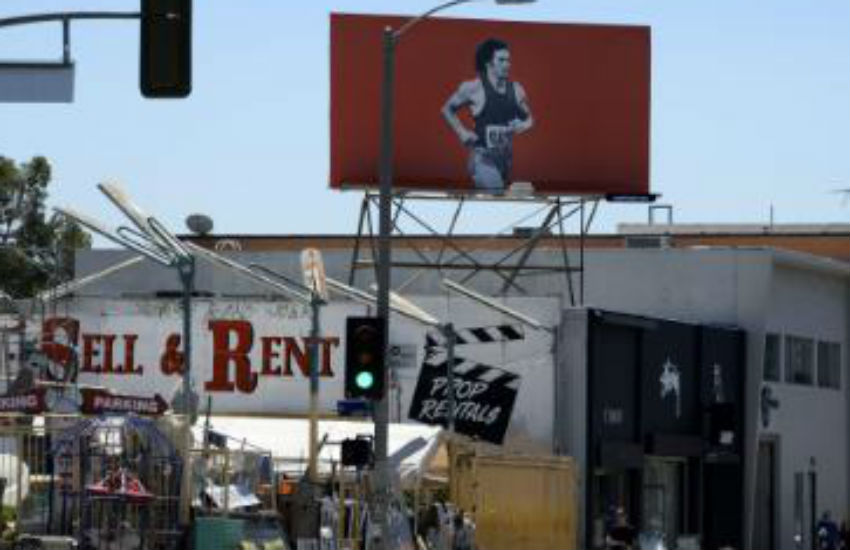 Driving around Mid-City, you may have noticed a billboard on La Brea featuring a vintage image of a young Bruce Jenner set on a bright red backdrop and showcasing the athlete-turned-reality TV star as we all remember him from his Olympian glory days. Jenner, who came out as a transgender woman in an interview with Diane Sawyer on Friday, won the gold medal in decathlon at the Olympics in Montreal in 1976 and became one of the most iconic figures in American sports.

The billboard, which appears to celebrate Jenner’s heyday, belongs to fashion retailer Undefeated and it’s been up for about a month, which made us wonder: did Undefeated know about Jenner’s planned revelation?

“Not at all,” says Undefeated co-founder James Bond. “We’ve had the billboard since 2002.” Collaborating with sportswear giant Nike, Undefeated commissioned a line of billboards designed to make an aesthetic statement rather than a commercial one. “It’s public art,” says Bond. “Bruce Jenner is obviously prevalent in pop culture right now, but it’s just a coincidence.” He added that Jenner’s gender transition won’t be a factor in the campaign moving forward, either.

The billboard was designed in-house by Undefeated’s team of creatives, who are also behind the “O.J. Simpson/White Bronco” billboard that raised a few eyebrows last month. “It’s about capturing a moment,” Bond explains. “It’s a snapshot that speaks volumes.”

My LA to Z: Mike Epps

Street Art Spotter: A Color Palette that Will Make a Rainbow Jealous