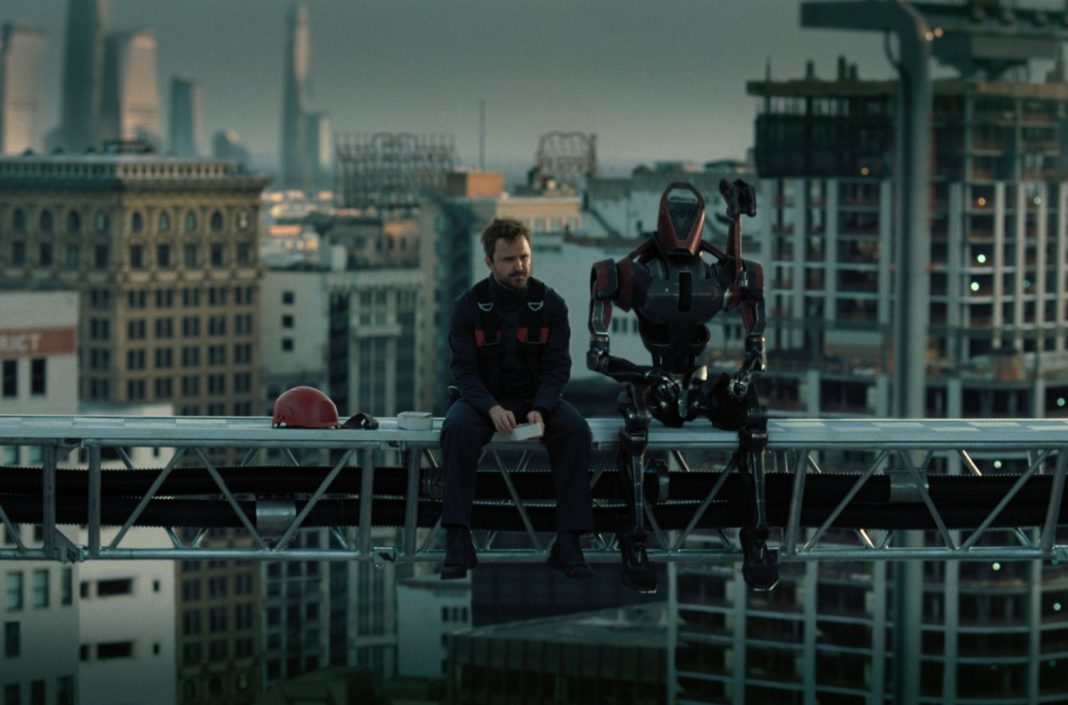 Across its first two seasons, HBO’s Westworld focuses on the inner workings of its titular robot-filled hedonistic park (and its sister venues). It only shows the outside “real” world briefly, and even then it isn’t entirely clear in what year the show is taking place. In its third season, which premiered in March, the focus shifts, with a lot of emphasis on the Los Angeles of 2058. And in its depiction of the future city, it’s drawing heavily from the L.A. of the present.

In the first three episodes, there are some recognizable locations that Dolores (Evan Rachel Wood), Hale (Tessa Thompson), and others drive by, hang out at, or threaten, ranging from the Hotel Indigo at the Metropolis complex downtown to a visually familiar MacArthur Park. When the aimless and disillusioned Caleb (Aaron Paul) toils away in construction, it’s downtown’s Historic Core behind him, albeit with the addition of a few futuristic skyscrapers. Other spots include the penthouse of LEVEL and the lobby of the Mayfair Hotel.

To create 2058, the producers decided to heavily utilize downtown and combine it with locations in Singapore, according to Mandi Dillin, supervising location manager and coproducer on the series. Dillin, who’s worked on Westworld since the pilot, says the show’s makers have been discussing what cities of the future would look like since the beginning. The series used some downtown L.A. locations—plus some shots of Hong Kong—for real-world scenes in season two, but when production of season three began in earnest in December 2018, Dillin says that’s when cocreators Jonathan Nolan and Lisa Joy and the rest of the crew focused on building their vision.

“We were mainly focusing on plazas and urban areas that might have at one time been really busy urban streets,” Dillin says after the second episode aired. “We felt it should be more park like, weaving into our future world where everything is pleasant on the outside. Then we take away the glossy sheen to see what really is there.”

The production staff looked at what modern cities are moving toward and the ways in which walkability and open space are prioritized. The opening episode emphasizes elevated walkways, using the Calvin S. Hamilton Pedway, a 1970s-era network that connects Financial District skyscrapers. Future L.A. is light on traffic. Cars are limited, being restricted “to the people who can afford them,” Dillin says. Although some elements from Singapore were added to L.A. locales, no building in downtown Los Angeles was digitally removed.

“There was a mandate, when shooting interiors, to try to show the [downtown] skyline as much as possible,” she adds.

For the third season the show grounds Caleb’s future world in real locations. The construction site where he works in the premiere is the real in-the-works Perla condo building at Fourth Street and Broadway, while his home is New Carver Apartments, a supportive housing space in downtown’s South Park neighborhood.

“There are so many transitional housing units going up right now that are so futuristic looking,” Dillin says. “We liked New Carver because it’s circular, and we were able to match that with Singapore.”

The show still utilized older-looking structures for some locations. Dillin points to a pre-WWII Brutalist building in the second episode, which she says was chosen in part because of Nolan’s predilection for the style and to show how older architectural texture is repurposed and redeveloped in later periods.

Dillin says there are plenty of L.A. locations still to come in future episodes, including office towers in Century City and more downtown spaces. Keep your eyes peeled.

RELATED: The Most Philosophically Significant Moment of Westworld Is Hidden in the Opening Credits