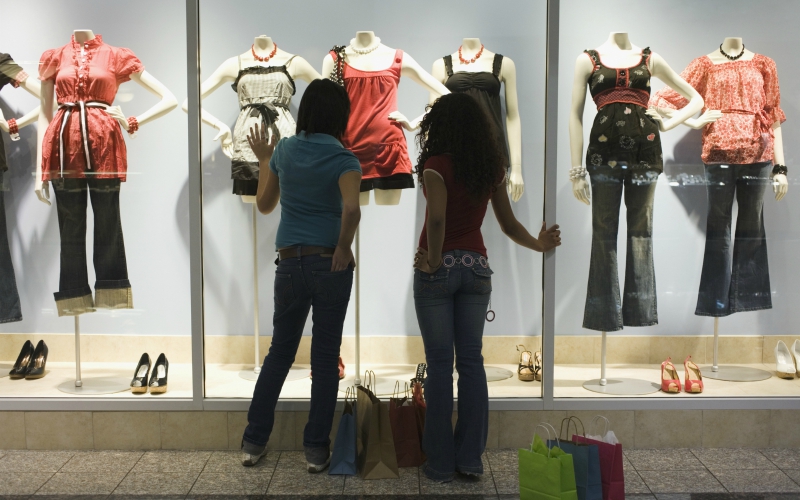 If you drove down Overland Avenue toward the Westside Pavilion at the right time of day, you could easily spot us. A gaggle of girls in burgundy skirts and blazers, we moved quickly, eager to get to the mall. The walk wasn’t long—a straight shot from our all-girls Catholic high school. The mall offered us the chance to get a taste of “the real world” after spending an entire day worrying about the lengths of our skirts or our respective college choices.

I hated that uniform. As a blossoming punk rocker (read: young poseur) I hated the idea of someone else telling me what to wear. I wanted to express my uniqueness. I wanted to wear all black.

On half days, I walked with everyone to the Westside Pavilion not to socialize or gossip about school but to find an escape. Nostalgia for that era hit me hard when I heard the news: the mall of my formative years is on its way out, at least in its current form. The Los Angeles Times reported last week that the “struggling” Westside Pavilion will largely be converted from retail to office space by mid-2021. Macy’s, once of the mall’s remaining anchor stores, is closing at the end of the month. One of the contributing factors to the mall’s demise: the rise of online shopping.

I’m as guilty as the next millennial of spending hours scrolling through online stores. I give in, time and time again, to the allure of free shipping and easy returns. I ooh and ahh over the gorgeous product shots and the models in them, and the promise that I’ll look just as good when the package arrives on my doorstep.

But in high school, the mall was more than a place to purchase stuff. More than I needed clothes or beauty products, I needed a space—an IRL one—to feel like I could catch my breath outside of a school environment that felt suffocating. The Westside Pavilion was my parent-approved after-school sanctuary, my chance to experiment and become an individual. Few spaces gave me that refuge. There was a library across the street from school where I volunteered and read voraciously. There was the Indian restaurant with a killer buffet where we stuffed our faces. Those places were also within walking distance from school, but none was as impactful as the mall, the one place that felt like it offered hours-long glimpses at life outside the strictures of a high school setting.

The Westside Pavilion gave me my first chance to up my weirdo status. There was no Hot Topic at the Baldwin Hills Crenshaw mall, my local stomping grounds before I got to high school. No other store I visited during my middle school and high school years played such loud, abrasive music. No other store carried dark clothing covered in band logos and gothic imagery (this was before Hot Topic started selling Twilight shirts, my dudes). At school, we all wore burgundy blazers for special events and masses; but my “flair” came mostly from the containers sitting by the Hot Topic cash register.

The mall gave me everything I needed: sustenance in the form of Panda Express, aesthetic fulfillment in the form of goth-light clothing, and plenty of seating where I could do my homework. During visits, I often slipped away from my group of classmates and headed to the top floor. It was much quieter there and as I’d gaze gloomily at building’s domed glass ceiling, I’d wonder how much longer I could withstand the feeling that I was an outsider. When I graduated from high school and moved on with my life, I often thought about the mall and what it meant to me. The first time I visited as an adult, I felt a sudden pang of longing—there’s romance in teenage angst.

So, goodbye to the mall of my high school years. Once it’s filled with office workers rather than shoppers, I hope today’s disgruntled Catholic school girls will find a place where they can seek refuge and become themselves.

RELATED: The New Coastal Italian Restaurant in the Beverly Center Is Way Better Than You’d Expect