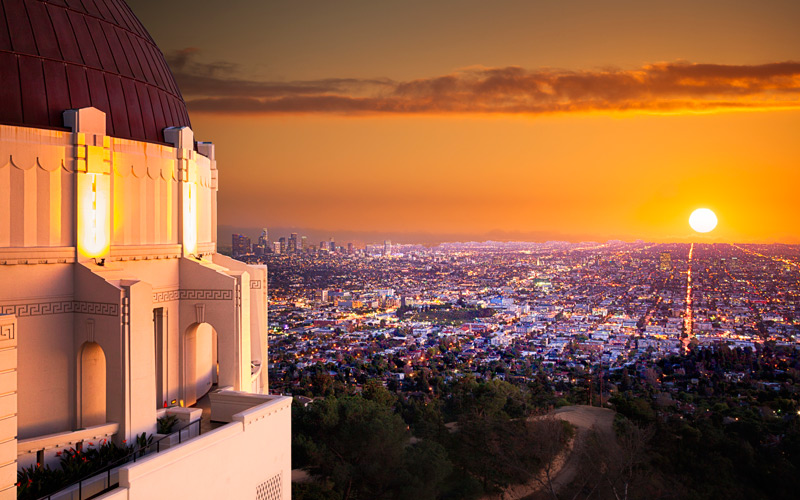 From an interview with Joe Donnelly in the Los Angeles Times:

Herzog says his humor has been buoyed over the past 20 years by his living in Los Angeles, which he turned to after things didn’t work out with San Francisco. “My wife and I found it not the most exciting place in the United States and we said we want to move to the city with the most substance, and it was immediately clear that Los Angeles, that’s the place.”

As for “the glitz and glamour of Hollywood,” Herzog says, “that is a very thin crust. Behind it is an enormous intensity of culture and creative energy and things that ultimately decide the big things, the big internal movements of the planet. Things get done here.”

Among those things: “The collective dreams of the world in cinema and acceptance of gays and lesbians as an integral part of a dignified civilization, and many, many other things that are just wonderful. You see the influx of the Mexicans, which I find very invigorating…. If you can imagine California or Los Angeles without the Mexican population, it would be the instant end of California.”

To Herzog, someone like Elon Musk epitomizes the spirit of Los Angeles, with his outsize ambitions to day-trip private citizens to the moon and eventually colonize Mars.

“The kind of confidence of Elon Musk … you don’t find it anywhere else,” Herzog says. “It has advanced what we’ve done on this planet considerably.

Herzog goes onto criticize L.A.–correctly–for inflicting hippies and other “big cultural stupidities” on the world.

From his podcast Conversations with Tyler, influential economist Tyler Cowen told his guest Patrick Collison, CEO of Stripe, which is headquartered in the Bay Area:

“I think Los Angeles is the greatest city in the world. I’d love to live there; it has the best ethnic food. There’s something about it, the way it’s a cosmopolitan city, sense of openness. Someone once said, ‘What’s real there is so phony and what’s phony is so real.’ It’s always surprising me, and I love their diverse monoculture. My favorite part of this country.”

RELATED: These Nondescript Stairs in Silver Lake Are Actually a Memorial to a Gay Rights Game-Changer