Home Uncategorized We’ll Always Have Indio: A Look Back at Coachella 2013 in Pictures 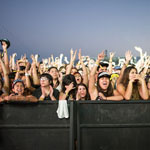 Filled with sun-kissed afternoons, gigantic art installations, and three days’ worth of music, Coachella runs the gamut of genres and generations. If there’s one truism about Southern California’s biggest music festival, it’s that you never know what will happen next.

This year, the biggest stories to come out of Indio were the debilitating sandstorm, the British music invasion (The Stone Roses vs. Blur), and R. Kelly’s surprise guest appearance during Phoenix’s closing set (“1901” and “Ignition” mash-up, anyone?).

Weekend two saw smoldering heat, tents overflowing with attendees dancing to the “oontz oontz” of Major Lazer, and crowds rocking out to the colorful, funky melodies of the Red Hot Chili Peppers.

Now that both weekends of the musical celebrations have come to an end—and the Wu-Tang bat-wing signs are no longer in sight—experience the revelry one last time.