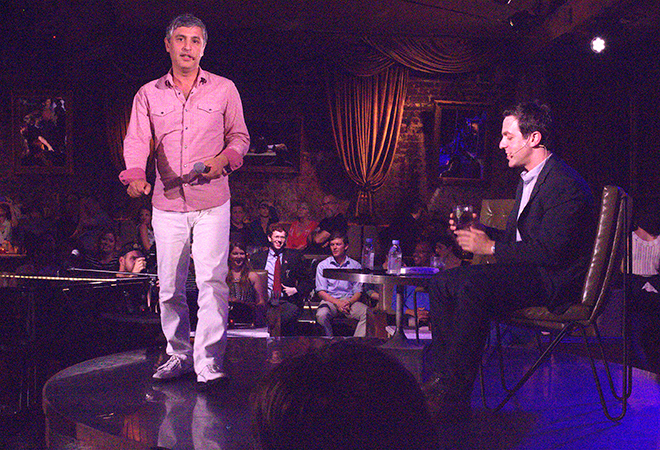 DBA played host to the inaugural event of the Writer’s Room, a new series that aims to shake up the L.A. literary scene. This was no ordinary lit event held in a quiet room to polite applause and muffled coughs. A live band greeted attendees with upbeat lounge music onstage while bartenders whipped up craft cocktails in the packed club.

Saturday Night Live cast member Nasim Pedrad warmed up the crowd before welcoming host and author Reza Aslan (Zealot: The Life and Times of Jesus of Nazareth). Aslan’s guest for the night was actor and author B.J. Novak who was there to promote his recent book One More Thing: Stories and Other Stories, which is now on the New York Times best seller list. Novak joked as he walked onstage to band music and multicolored spotlights, “Thank you. I believe very much in glamorizing the writing process.” Over the next hour-and-a-half they discussed Novak’s writing process, read excerpts from his book, and took questions from the audience. It felt more like a night at a comedy club than a book discussion.

The Writer’s Room, which is set take place the first Wednesday of every month, will feature “fast-paced conversations with some of today’s most compelling poets, novelists, non-fiction writers, and screenwriters.” Guests have yet to be announced, but we recommend you start reading now; there are no Cliff’s Notes for this.