Home Art All the Weird Desert Art Within Road Trip Distance of L.A. 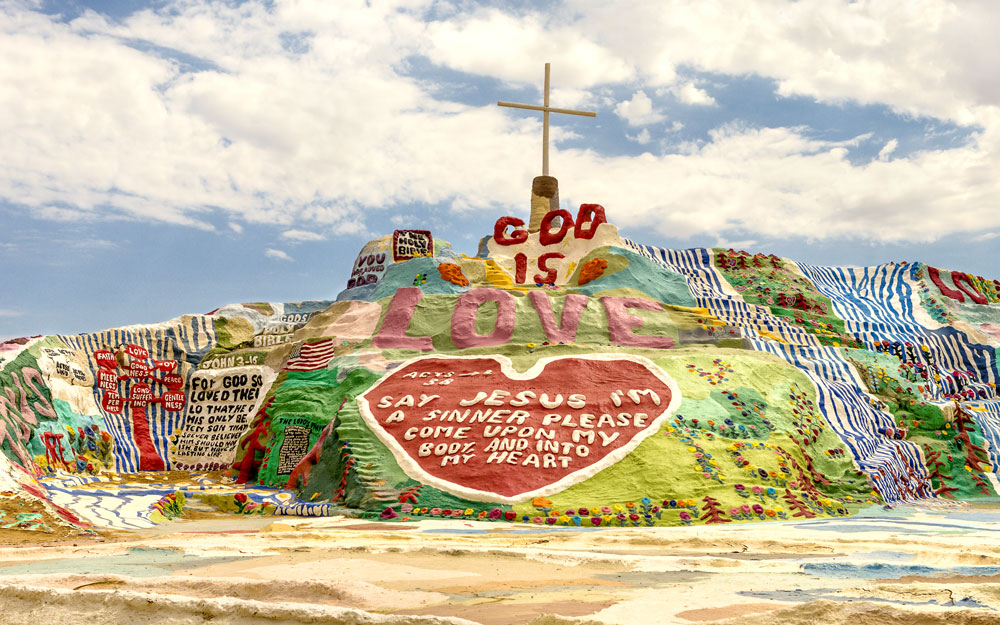 Let’s be real, the mythos of the American road trip is probably an invention of Big Oil to get you guzzling fossil fuels when you could just stay at home, comfortably watching Wild over a bowl of Trader Joe’s vegetarian chili. But sometimes the open road just calls, like, “Yo yo, it’s me, The Open Road. You should drive out into the desert this weekend just cuz.” Then the next thing you know, you’re halfway to Joshua Tree with an unreasonable number of Quest Bars sliding around in the back seat of your car. It happens to the best of us, and in that moment you may as well embrace the impulse and accept what the desert has to offer—which is basically rocks, sand, horned lizards, and bizarrely creepy art installations. When it comes to the last item on that list, here’s what to look for.

Expectation: A theme park seven times the size of Six Flags Magic Mountain. Reality: Seven 30-foot tall stacks of fluorescent boulders constructed by New York-based artist Ugo Rondinone. The work is a symbol of human presence in the wilderness, a mirroring of the piled rocks that hikers, Girl Scouts, Luke Skywalker, and prehistoric hunter gatherers have been leaving behind since the dawn of time.

Location: Just off the 15 about ten miles before you hit Vegas

One man’s giant hole in the ground is another man’s art. Heizer’s two massive trenches in a Nevada mesa stretch about as long as the Empire State Building is tall. They’re not as clean cut as they were when he dug them in 1970—they’ve eroded and filled in with rubble over time—but they’re definitely still there. Heizer hopes to restore the work to more pristine shape, but for now he’s busy putting the finishing touches on his gargantuan City project.

Artist/social activist Noah Purifoy moved to JTree in 1989 at the age of 72—it was way cheaper to live out there than in L.A.—and constructed a veritable ghost town out of cast off plywood, old TVs, tires, and other assorted garbage. Stroll through his abandoned art city, smirk knowingly at the wry political undertones, and be moderately creeped out by the atrophy of it all.

This giant mound of hay bales and mud painted over with cheery Christian platitudes was constructed by Leonard Knight after his failed decade-and-a-half long quest to sew a “God Is Love” hot air balloon and fly it across the country. His creation has outlived him and become mandatory Instagram material for both deeply ironic and deeply sincere Southern California college students.

Here’s the story of Elmer Long’s Bottle Tree Ranch: There was a guy named Elmer Long. Starting when he was a kid, he and his dad would collect old bottles from trash dumps in the desert. When he was 55 he wanted to retire and build forest of metal rods decorated with his bottle collection. So he did.

More than a hundred of Ricardo Breceda’s intricate metal sculptures of prehistoric animals, fantasy creatures, insects, and a guy in a jeep are scattered across tenish square miles of desert.

More garbagy reclamation sculptures a mile away from Salvation Mountain. Not really anything to do with Jesus. Started by Charlie Russel in 2007 after he abandoned his tech job and moved into a shipping container, this far corner of Slab City houses an eccentric off-the-grid artist community.

Creepy cloaked figures, a nude 8-bit woman built from cinder blocks, a mosaic couch that was originally made for a children’s museum, and so much more—all just down the street from cheery local ghost town, Rhyolite.

You already know about these dinosaurs, but it’d be weird to have this list without putting them on it. So, here you go. Dinosaurs.

Location: Just off the 10 about 15 miles before you hit Palm Springs

A photo posted by California Through My Lens (@californiathroughmylens) on Feb 20, 2013 at 1:26pm PST

In the ’50s, a guy known as the Desert Pastor hired Inglewood sculptor Frank Antone Martin to put up some Jesus statues out by Yucca Valley. The steel-reinforced plaster sculptures depict Jesus doing typical Jesus things like eating the Last Supper and and holding his arms out in that way where it’s not quite clear if he’s going for the hug or a handshake. Many crumbled in a 1992 earthquake and haven’t been repaired.

Australian artist Andrew Rogers’ Earthworks geoglyphs are scattered around the globe. This design, probably his most famous, is just a few miles north of Yucca Valley. It’s 63 percent more impressive when seen from the air (perks of being in a UFO), but what can you do?

Shh, can you hear that? It’s the sound of no-so-subtle social commentary. A group of artists painted this part of the abandoned Three Kids Mine outside of Vegas to resemble a giant Wheel of Fortune, except instead of cash jackpots, the wheel is marked with prizes like “Lose all hope.” The area is contaminated with lead and arsenic, so if you go there, try not to breathe in the dust…