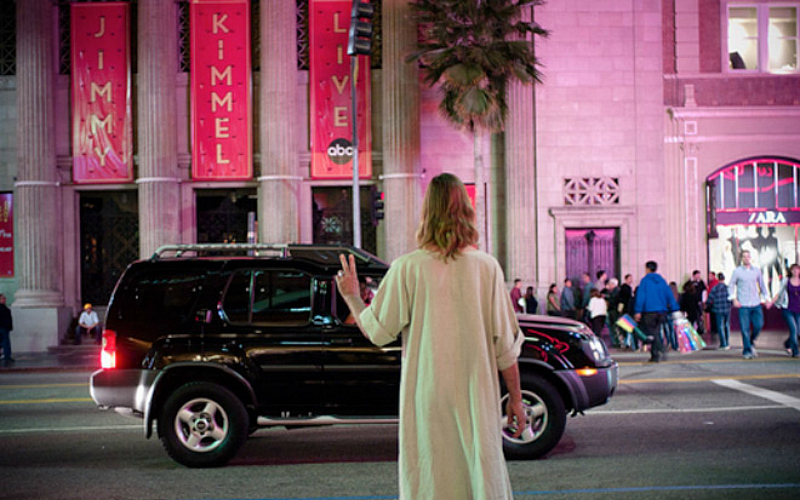 Photograph courtesy of I Saw Jesus in L.A.

West Hollywood has lost a beloved local character. For nearly a decade, Kevin Short was known as “WeHo Jesus,” walking the neighborhood in flowing robes and posing for hundreds of photographs with strangers who spotted him (many of which have been collected on the “official” Tumblr, I Saw Jesus in L.A.).

A fixture around the community, Short was tapped to appear in his WeHo Jesus persona in music videos by LMFAO and Lana Del Rey, and inspired Aerosmith’s song “Street Jesus.” The Comedy Store, where Short was a long-standing regular, honored his passing on its Sunset Boulevard marquee on Wednesday night, once news of Short’s passing got out.

Short, who was also known as Kevin Lee Light, reportedly died on December 13, according to WeHoville, but it was not publicly confirmed until a neighbor of Short’s released the information on Facebook. In the neighbor’s post, he references a short illness, but no official cause of death has been confirmed.

In the hours since the announcement, there has been an outpouring of remembrances on social media, several of which appear below. While he claimed not to be a religious man, it’s clear that WeHo Jesus had a powerful, positive impact on the lives of many who encountered him.

A candlelit vigil will be held in his memory on Sunday, January 7 at West Hollywood Park starting at 4:30 p.m.

RIP #wehojesus if the Bible tells us anything, we’ll see you back here in just a few short days.

RIP Kevin Light, the Hollywood Jesus. You will be missed many 💔 #RIP #HollywoodJesus #WeHoJesus

Aw man. Hollywood Jesus died. He was a really cool dude. It’s a pretty bold move, to walk around, for years, dressed as Jesus Christ. Pretty hard to pull that off and not look like a real jerk. But Kevin had such a calming, benevolent presence, that you felt… maybe somewhere in the back of your head a little, you wondered if it could really be him. Very few people have a calming presence these days. You will be missed pal. #WeHoJesus #RestinPeace Pix 2009

Love this photo of #wehojesus What a wonderful soul, hopefully he can do some real work for us now. 📷 #briankemm @briankemm #loveislove #rip