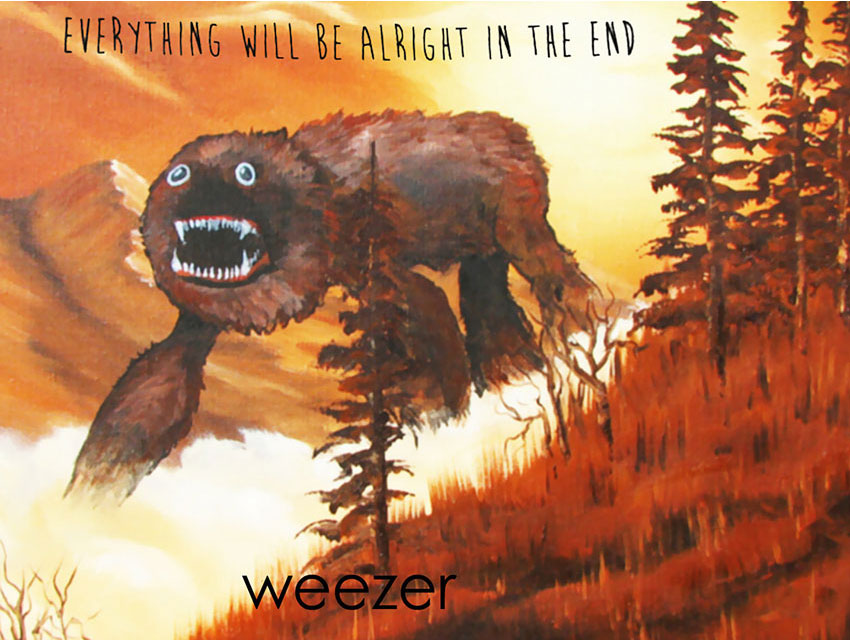 The members of Weezer are nothing if not survivors. They survived Napster. They survived the critics. Lead singer and songwriter Rivers Cuomo even survived a serious bus accident in 2009. The one thing they weren’t sure they would survive was the fans. Backlash against the group began in the mid 2000s, when the band traded in its threadbare emotions, deceptively simple songs, and fuzz-laden guitars for slick production, trite lyrics, and the skills of pop hit-maker Dr. Luke. Say it ain’t so…

Everything Will Be Alright In The End, which comes out today, is a pop rock mea culpa of sorts, an attempt to take listeners back to the familiar sonic territory of Weezer’s first two records, 1994’s eponymous debut (commonly referred to as the Blue Album) and 1996’s masterful Pinkerton. For good measure, the band brought in Ric Ocasek (best known as the lead singer of the Cars), who produced the Blue Album as well as 2001‘s platinum-selling Green Album.

Cuomo has said the album is divided into three sections. One section relates to the fans, the next features songs about girls, and the final section deals with father figures, including his own, with whom he reconciled after years of estrangement.

“Back to the Shack,” the first single off Everything, is an apology to the fans they alienated. “Sorry guys I didn’t realize that I needed you so much,” Cuomo sings. “Thought I’d get a new audience / I forgot that disco sucks.” In “Eulogy for a Rock Band,” Cuomo says he and his bandmates “will sing the melodies they did once before.”

One of the best elements of early Weezer was Cuomo’s ability to layer strong melodies over big guitars and lyrics that exposed the fragility of a jilted introvert. That formula is employed on “Go Away” and “Lonely Girl,” which sound like they could have been written in the Pinkerton era. Butfor all its ambition and hype, Everything contains only a few songs that sound like early Weezer. And its strongest moments are two instrumental numbers near the end of the record. “The Wasteland” and “Return to Ithaka” pay homage to the metal and hard rock Cuomo grew up with, complete with searing guitar harmonies and bravado that would make Ace Frehley blush.

Everything isn’t exactly vintage Weezer, but if it’s a sign of what’s to come, things just may be all right in the end.

U2 Who? No Doubt Brings Down the House at KROQ’s Almost Acoustic Christmas