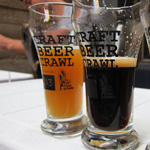 Your weekend is here. What are you going to do about it?

DANCE: Dance Downtown
The free Friday night dance series has been drawing crowds all summer. This evening is devoted to disco, which means only one thing: time to show off your inner John Travolta. For those who need a little move-and-groove help, there are instructors on site. More information (August 9; Music Center Plaza)

DANCE: Great Gatsby Party
Dance, drink, and party in true flapper style at this Roaring ‘20s-themed shindig at the historic Park Plaza Hotel (built in 1925). General admission is $30; a $65 VIP ticket will get you access to an open bar at the Speakeasy Lounge. Dress in your best bootlegger outfit. More information (August 10; Park Plaza Hotel)

HEAR: The National with Daughter
It’s totally sold out but maybe you can buy a scalped ticket Riding a wave of acclaim for their latest album, Trouble Will Find Me, Cincinnati rockers the National perform among the tombstones at the hallowed burial ground. Daughter, the folksy project of the lithe-voiced Elena Tonra, kicks off the night. . More information (August 11; Hollywood Forever Cemetery)