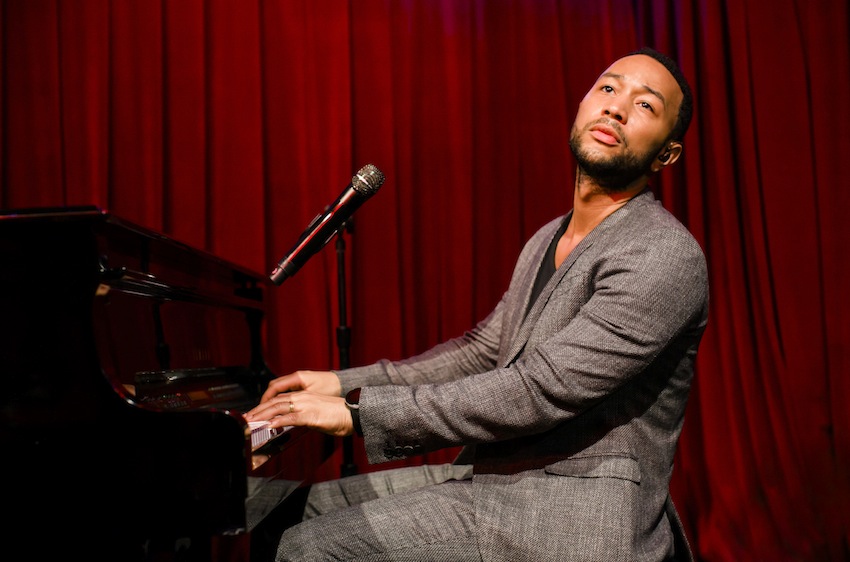 In the middle of his run of sold-out shows in Los Angeles, John Legend played an intimate KCRW Apogee set for an invite-only audience of 200. Backed by a guitarist and a four-piece string section, the nine-time Grammy-winner played songs from his latest album, Love in the Future. You can watch it now on KCRW’s “Morning Becomes Eclectic.”

The concert was hosted by Apogee Studios, the facility of music producer and engineer Bob Clearmountain, the man behind the mixing board for Bruce Springsteen’s Born in the U.S.A., David Bowie’s Let’s Dance, The Rolling Stone’s Tattoo You, and hundreds of other albums.

The cozy show was right up Legend’s alley; he worked the small room with easy charm. During the interview segment, KCRW deejay Jason Bentley pointed out that his Grammy performance of “All of Me” capitalized on his “ability to make 28 million and one people feel like you’re singing directly to that person. Is that a gift? Is that something you practice? Or are you just John Legend?”

The songwriter smiled coyly at the whistles from the audience. “You just have to get into the song and feel it. You wrote what you wrote,” he replied. He later added that before the Grammys the song wasn’t charting high enough to warrant a performance during the broadcast, but by the end of the night it had shot to No. 3 on iTunes.

“The songs people connect with the most are personal and universal at the same time,” he said. “The gift of a good songwriter is to be able to translate that personal feeling into something everybody feels is about them. I think we nailed it with ‘All of Me.’ There’s the connection right there in the composition, and when you perform, you just have to rest in the song.”

Legend taped the radio show ahead of tonight’s Marvin Gaye tribute at the Hollywood Bowl, where he’ll play What’s Going On in its entirety with Sharon Jones & the Dap-Kings and the L.A. Philharmonic. He previously performed the set, titled “What’s Going On…Now,” in 2012 at the request of the Kennedy Center, where Gaye performed the album 40 years prior.

“It’s going to sound so cinematic and gorgeous,” Legend said of the 50-piece orchestra he’ll play with tonight. “I’m just going to try not to mess it up.”

Bentley commented that political component of “What’s Going On…Now” is especially poignant given the continued civil unrest in Ferguson, Missouri.

“It’s a mess. It’s not new, though,” Legend said, citing slavery and the Jim Crow era. “Military-style weapons are only exacerbating the problem. It’s been happening since before the ’60s, when there were all kinds of extralegal ways for black folks to get killed and for black bodies to not be valued in this country, and that hasn’t really changed enough. So we see things like an unarmed black man being shot on a regular basis. When that’s happening, it just shows you that we still have a long way to go and we can do better. Hopefully we will.”

There’s less in the zeitgeist today that spurs young people to political action than there was when What’s Going On came out in 1971, Legend said, and he believes it’s because we no longer have a draft that forces young people to care about politics. While Legend doesn’t want a return to the draft, he hopes its accompanying sense of urgency will return, partly through music. You can hear (and watch) Legend’s full set at KCRW and catch “What’s Going On…Now” at the Hollywood Bowl tonight.