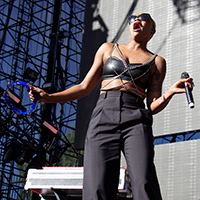 KROQ held its 22nd Annual Weenie Roast y Fiesta at the Verizon Wireless Amphitheater in Irvine this past weekend. The sold-out, all-day jam featured Avicii, Beck, Bastille, Foster the People, Fall Out Boy, Fitz & The Tantrums, Capital Cities, The Neighborhood, the 1975, and plenty of other bands. Proceeds benefit Heal the Bay and The Surfrider Foundation.

The summertime counterpart to KROQ’s annual Christmas show, Weenie Roast utilizes a revolving stage to eliminate downtime between bands. Beck pointed out from the stage that the last time he played Weenie Roast was 1994, before most of this crowd was born. Still, between his ’90s hit “Loser” and a cover of “Billie Jean,” he had the crowd on its feet. This year, the lineup skewed toward newer acts and danceable tracks.

Noelle Scaggs of L.A. indie-soul act Fitz & The Tantrums lauded the radio station for taking chances on bands like hers that don’t fit neatly into the rock genre.

“We never wanted to be pigeonholed as some retro outfit,” Scaggs says. “It’s really cool that [our music] has been accepted into all these realms, especially alternative radio because we all grew up to New Wave rock. To be played on that radio now is wonderful, and it’s wonderful to see how radio’s changing and accepting the different demographics of rock.”