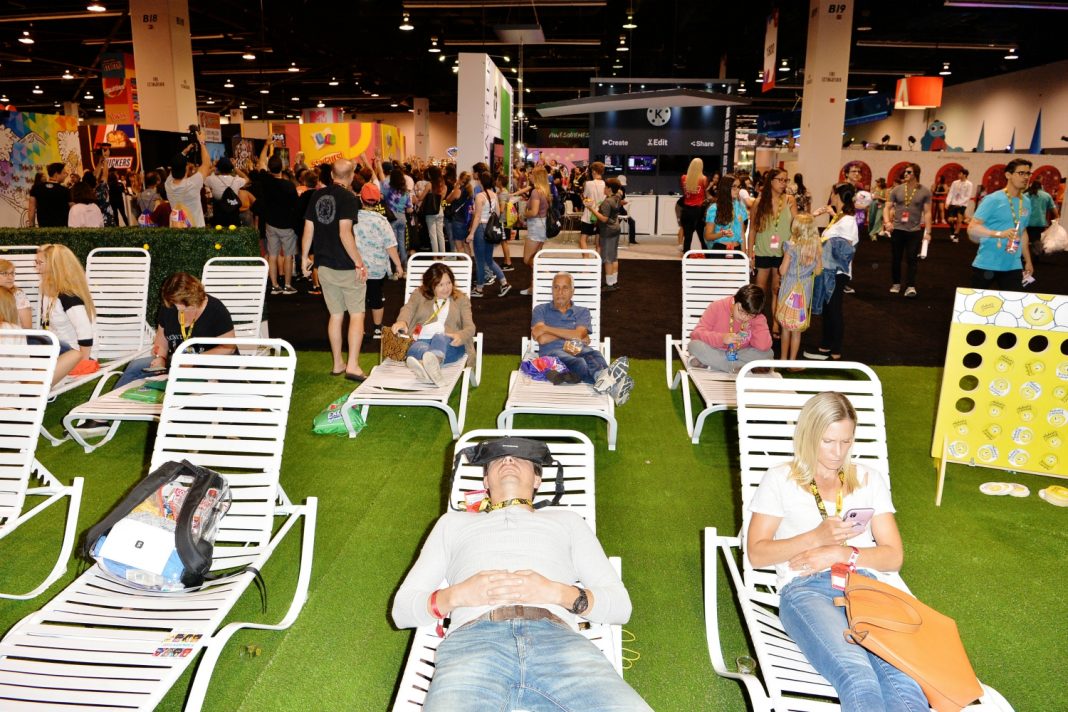 Tucked away inside a Marriott Hotel in Anaheim, there’s a lounge where several people sit in silence and stare. Well, one man can’t stare because every few seconds his eyes start to droop shut; he jolts himself awake right before falling out of his chair. Another woman is snuggled up with her shoes off, hoping to be as lucky as the man dozing off. Toward the back of the room, two hotel employees tend bar, selling liquor, wine, and beer. On the adjacent wall, two masseuses give massages to relax customers.

Everyone in the lounge has one thing in common: They’re parents who have been dragged to VidCon by their kids. For VidCon attendees younger than 16, they must have a chaperone badge-wearing adult with them. But when those adults need a break from the TikTok-famous preteens and the thousands of fans screaming in excitement at the site of the Vlog Squad, they head to the parents’ lounge to drink, nap, or work. Or all of the above.

“I wanted to smack the grilled cheese out of their hands and do it myself because I know how much money they’re making from it.”

Brian Roberts sits alone in the parents’ lounge. He’s visiting Anaheim from Colorado with his 14-year-old daughter and her friend. Right now, they’re off doing whatever kids do at VidCon, something Roberts describes as “quite a spectacle.”

“It’s amazing how big it is,” he says. “It’s not my thing, but I’m surprised at how famous some of these influencers are yet I don’t know who any of them are.”

He’s attended some panels with his daughter—one about how being a YouTuber isn’t always about doing crazy and outlandish things. The example the panel showed was how even making a grilled cheese can be good content for YouTube.

“I wanted to smack the grilled cheese out of their hands and do it myself because I know how much money they’re making from it,” he says. “But I look at the influencers and I know they’ve worked hard.”

Kelly Kaeser from Moorpark is on the other side of the parents’ lounge. He says he’s finally given in to coming to VidCon with his 15-year-old daughter because he “knows she enjoys it.”

This isn’t his first year here, but it’s his first year he’s agreed to stay for three of the four days. He says his daughter has met friends at VidCon and while she is off with friends, he’s able to sit in the parents’ lounge and sip on red wine while working remotely from his laptop.

“I love that my daughter loves it,” he says.

Not all parents are as relaxed. Next door at the Anaheim Convention Center, where most of VidCon takes place, a man with a chaperone badge sits on a bench with his arms crossed. He’s so cranky, he shoos me away before I can even ask any questions. Elaina Guitierrez, however, is happy to talk. She stands near a wall, texting her 15-year-old daughter trying to get her whereabouts. She says her daughter is “chasing all of her favorite influencers.” Guitierrez doesn’t watch any YouTube and says VidCon isn’t exactly her cup of tea. In fact, the whole influence thing kind of saddens her. While she’s braved VidCon, she says several kids have bumped into her, stepped on her feet, but not one has offered a “sorry” or “excuse me.”

Inside the large expo room in the convention center, hundreds of brands have set up booths with merchandise and interactive photo oops. Dawn Billings sits with her back against the wall while her 13-year-old son makes his way around the room. She and her son came all the way from northern Michigan and this, plus Disneyland, is her family’s summer vacation this year. Billings doesn’t watch YouTube or TV, but she says she’s here for her son.

Neida Gardea and Marisela Torres are lucky because they have each other. The two friends are at VidCon with a 16-year-old, 15-year-old, and three 12-year-olds. They laugh and chat as they make their way to a panel. They can’t exactly remember what panel they’re headed to as they snack on their acai bowls because VidCon is more for their kids. They’ve spent the majority of VidCon shopping and eating while their kids are meeting their favorite influencers.

“VidCon is good because the kids love it,” Gardea says.

RELATED: YouTuber Convention VidCon Is Turning 10, but Not Without Some Growing Pains

At VidCon 2022, Influencers Discuss the Roe Reversal, Drag and Identity