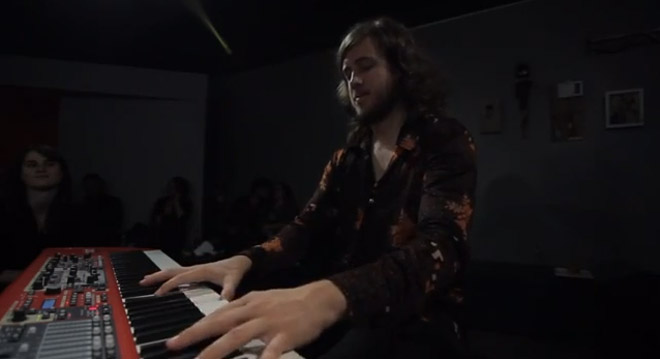 “I’ve never seen a line like this here before,” said one early arrival to Venice’s Del Monte Speakeasy last Thursday night. He, like so many others, had come for a tribute to late jazz pianist Austin Peralta who passed away just before Thanksgiving at age 22. (Cause of death still pending.) That Peralta’s music reached not only jazz aficionados but fans of numerous genres was on display as the crowd grew to capacity in the short-ceiling basement club that Peralta had played with many times in his trio. Their final concert at the Speakeasy was October 18, 2012. Everyone thought there’d be more.

The evening’s organizer, producer/DJ Carlos Niňo, had corralled several of Peralta’s label mates at Brainfeeder Records for a tribute that will benefit JazzAmerica, an organization co-founded by one of Peralta’s mentors, the late bandleader Buddy Collette. The gold-standard gauntlet of local talent included bassist Stephen “Thundercat” Bruner, laptopist Teebs (who opened the show with a DJ set incorporating snatches of Peralta’s music), Daedelus, The Gaslamp Killer, and Strangeloop featuring Earnest Blount, Jr.

The lynchpin of the Brainfeeder aesthetic is mingling progressive jazz, electronica, hip-hop, and psychedelica through musical improvisation. (Label head and guru Flying Lotus is the great-nephew of Alice Coltrane.) It’s an intriguing aesthetic that has connected artists from disparate L.A. communities — musical, geographical, and otherwise. (We caught sight of a pink Nicki Minaj wig by the bar.) As the Townhouse turned into part smoky jazz hideway, part hip hop club, and part druggy rave there was an implicit jockeying for position — from fedora-headed jazzbos to glow-stick kids — among a diverse crowd that one wouldn’t find at the Blue Whale.

This was evident in the mournful yet tense opening speech by Thundercat, who with Louis Cole was part of Peralta’s vaunted trio. “Shut everybody up,” he snapped at the boozy crowd. “Can the people in the back stop talking please?” They did, sort of. Frequently having to pause to collect himself, he admitted, “It was hard for me to come down here tonight, because Austin and I were like brothers.” This sentiment was seconded by saxophonist Kamasi Washington, who reflected how he had grown up in Inglewood yet was able to connect musically with the tall, lanky kid from the Westside. Washington, who had known Peralta since he was ten, equated Peralta’s post high school growth spurt with his prodigal musical evolution: “He grew like a foot in six months!”

Dressed in a wool-knit turban and dashiki, Washington led a band comprised entirely of players who had collaborated with Peralta during his short but potent career: pianists Cameron Graves and Brandon Coleman, saxophonist (and Kamasi’s father) Rickey Washington, trombonist Ryan Porter, drummer Tony b, drummer Ronald Bruner Jr., bassisst Miles Mosely and trumpeter Dontae Winslow. They began in radical grand style with a 20-minute read of Peralta’s epic-of-the-soul “Algiers” — an odd-metered, impressionistic suite broken up with spots of dissonance — that seemed to energize half the crowd while confusing the other half. Next came a tribute to Frederic Chopin, one of Peralta’s favorite pianists, on “Chopin’s Lament,” which began with an appropriately Chopinesque minuet by Graves (who also composed the tune) before the band pulled it into this millennium with a deep-funk pull overlain with breezy California-cool horns.

This was followed by Washington’s equally expansive “Changing of the Guard” — a song its author testified “Austin mastered by ear in about ten minutes.” After a heartfelt final speech by the bandleader — who made a soft appeal about wanting to hide from such painful memories of a young life cut short but needing to confront them with music — vocalist Patrice Quinn took the microphone for a slowcore cover of Carol King & Gerry Goffin’s “Will You Still Love Me Tomorrow.”

“Austin, we love you,” declared Washington, “and we’ll keep lovin’ you.”

Here’s an audience recording of Kamasi Washington’s closing speech & “Will You Still Love Me Tomorrow.”