Home Urban Development Is This the End of Venice Beach as We Know It? 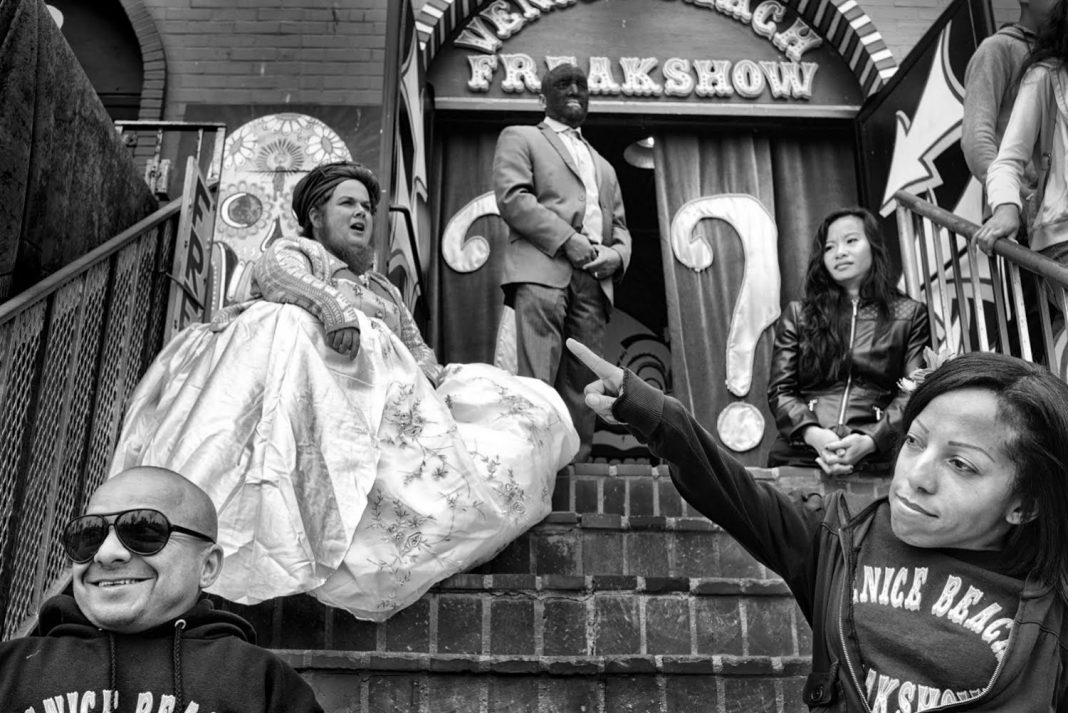 When Dotan Saguy began bringing his camera to Venice Beach in 2015, he was just looking to gain experience as an amateur street photographer. He’d recently taken a photojournalism course at Santa Monica College and the seaside neighborhood and tourism hub offered no shortage of subjects to capture, from surfers and skaters to musicians and bodybuilders.

“The hippies, the street performers, the vendors—it goes on and on and they’re all right next to each other,” says Saguy, who lives in West L.A. “It’s kind of addictive to just kind of hop around and travel between all of these worlds.”

He didn’t realize it at the time but the community was also undergoing drastic changes as tech companies moved in on the boardwalk, inciting protests against rent increases, gentrification, and displacement. Snapchat had started operating out of a bungalow on Ocean Front Walk two years earlier, and by the summer of 2015, the company had acquired tens of thousands of feet of additional office space nearby, including a $25,000-a-month penthouse apartment overlooking the street vendors and homeless encampments.

The multi-billion-dollar tech company began the process of relocating from Venice to Santa Monica earlier this year, but to Saguy, who is himself a tech entrepreneur and the founder of a mobile app publishing company, the damage had already been done. Saguy’s photos, all captured in black-and-white 35mm film at Venice Beach over the past three years, depict not just the famed athletic competitions and nautical parades that take place near Muscle Beach but also the increasingly common protests and evictions.

Dozens of the shots are compiled in his new art book, Venice Beach: Last Days of a Bohemian Paradise, which captures the last-ever Venice Freakshow—a staple of the boardwalk before it was evicted last year—and chronicles what Saguy sees as the end of an era. An exhibition of the same name is also on view at the gallery Venice Arts through September 21.

A portrait of Venice resident Jenna Dellinger hangs at the entrance to the gallery and has become one of its most celebrated images, doubling as the face of its press materials. In it, Dellinger wears a bikini and stares down a boa constrictor wrapped around a pair of gymnasts’ bars on the boardwalk.

Dellinger has only lived in Venice seven years—she moved here from North Carolina seeking a more progressive lifestyle after the birth of her son, Jackson Danger Dellinger—but she’s already felt the effects of gentrification. Last year, she says, she was evicted from the one-bedroom apartment she shares with her son after the property was sold to a developer.

“I went to court and won the case so I get to stay in my apartment, but they’re still trying to get me out,” she says. Last month she was served with another eviction notice, she says, and suspects it’ll take another year to fight it. She doesn’t want to leave Venice, partly because her son’s friends are here and partly because chronic pain and pancreatitis limit her own mobility. She collects disability benefits and isn’t sure she’ll be able to afford to stay.

Another photo in the gallery shows Jackson Danger Dellinger holding a sign intended for his landlord. “Why are you doing this?” it reads.

It wasn’t until last year, Saguy says, that he felt his photos had taken on a new urgency in telling the story of a changing Venice. He admits to giving the book and the exhibition an overly dramatic title—one he expected to get backlash for but so far hasn’t—in the hopes of bringing more attention to the boardwalk “getting thinned out and getting diluted…and turning into a Disneyland type place and a caricature of itself.”

Just don’t call Saguy an anti-gentrification activist. He sees himself as a street photographer rather than an advocate, and says he has no plans to participate in local political organizing. “Being in the capitalistic free economy, I understand the forces that kind of drive gentrification and I don’t think you can say that the developers or the investors are mean or that they’re evil,” he says, adding that he also reached out to Snapchat about taking photos from their perspective, but never heard back. “At the end of the day, it’s really up to the city to put rules into effect and incentives into effect [so that] what makes possible that bohemian community [can] be preserved.”

The irony of Saguy’s own position as a self-described “serial entrepreneur” documenting how tech companies have destroyed Venice Beach isn’t lost on him. He says it’s only through the success of his own startups that he’s been able to spend so much time on his photography projects, which aren’t exactly lucrative.

But it’s his background in tech, he says, that gave him insight into how “dysfunctional” it was for startups to snatch up real estate on the boardwalk. “Not only did it make no sense for Venice but it made no sense for Snapchat,” he says. He adds, “It was a big middle finger to the local community.”

Venice Beach: Last Days of a Bohemian Paradise is now on view at Venice Arts, 13445 Beach Ave., Marina Del Rey. An artist’s talk and book signing is slated for September 20 at 7:30 p.m.

RELATED: A Faction in Venice Is Trying to Stop a Former Black Church From Becoming a Mansion

Inside the World of Venice Beach’s Legendary Basketball Courts