Home L.A. History This Dilapidated Valley Shopping Center Is the Backdrop for Decades of Huge... 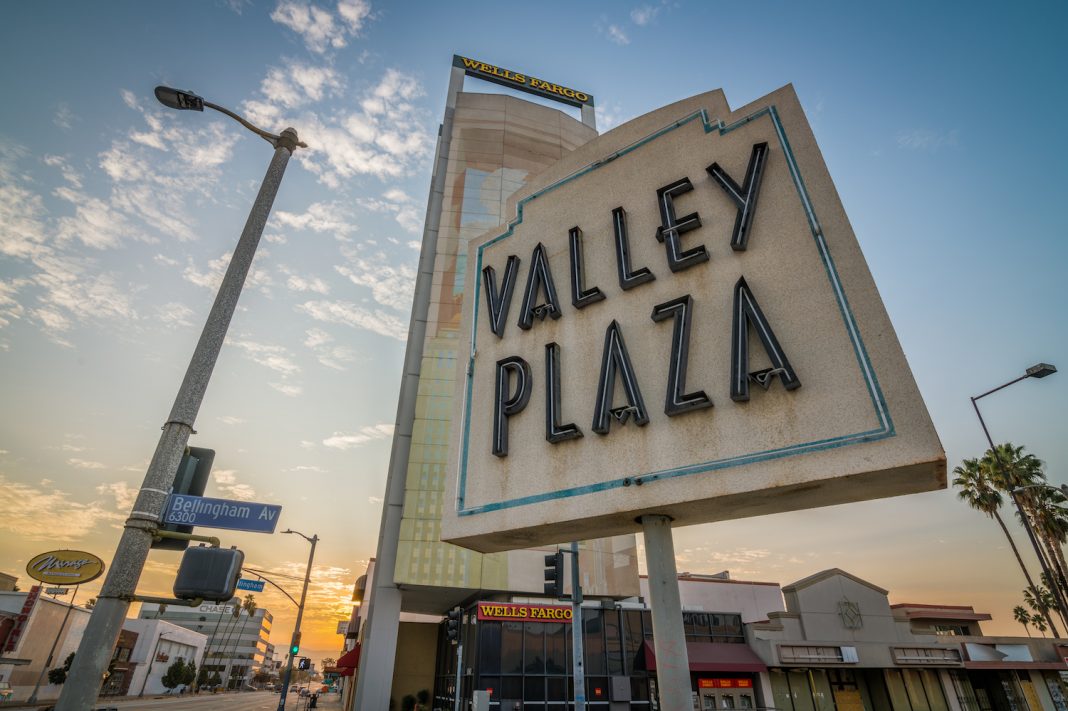 Opened in 1951 at Laurel Canyon and Victory Boulevard, Valley Plaza quickly grew into one of the largest open-air retail shopping centers in the country. The average suburban American family could find almost anything they needed at Valley Plaza. Banks, drugstores, a shoe store, and a supermarket were built around the center’s anchor store, Sears. Expansion of the Hollywood Freeway around this time also meant greater access to the shopping center. It’s most iconic feature, the Valley Plaza Tower, opened in 1960 and the 165-foot-tall building became the tallest structure in the San Fernando Valley.

While heavily-trafficked from the 1950s to the 1970s, Valley Plaza began to see a slow but steady decline in popularity due to socioeconomic transitions and competition from malls in places like Burbank and Sherman Oaks.

The 1994 Northridge earthquake caused extensive damage to the property and permanently closed a number of businesses. Remaining tenants of Valley Plaza were not offered long-term lease extensions when a massive overhaul of the property was on the horizon about 15 years ago. Unlike the recent multi-use redevelopment of its neighbor, Laurel Plaza, the rejuvenation of Valley Plaza was never realized. As a result, much of the property at the southwest corner of Victory Boulevard and Laurel Canyon remains vacant. Sears, located on the north side of Victory permanently closed in early 2020.

Though bittersweet, Valley Plaza has found a renewed use over the last 20 years as a makeshift studio backlot. Its triangular parking lot is sandwiched between Laurel Canyon and the Hollywood Freeway, providing a certain amount of privacy while creating the illusion of a shopping center that faces a main thoroughfare. Empty storefronts offer filmmakers a vast amount of creative possibilities. Mid-century stone siding can take the property back in time when the area is populated with period wardrobe and vintage cars.

We took a look back at some of the movies and TV shows that have committed Valley Plaza to film, forever documenting one of the pioneering American shopping centers.

Joe Friday’s (Jack Webb) opening monologue is all about the ever-changing Los Angeles landscape. Shots of the La Brea Tar Pits, the Hollywood Sign, the original Hall of Records, and El Pueblo de Los Angeles give way to images of a modernized L.A. Over a panning shot of Valley Plaza, Friday says, “In Los Angeles, you don’t have to go downtown. Everything’s right here: stores, markets, restaurants, banks. These plazas are all over the city, and they all need protection. That’s my job. I carry a badge.” In this episode, Friday and his partner Bill Gannon (Harry Morgan) are on the trail of a suspect in a series of Valley bank robberies. As teased in the Friday’s opening monologue, the transformation of the city has given rise to L.A. as the bank robbery capital of the world. Friday says to a witness, “Used to be you had to go downtown to bank, now every shopping area has a branch.”

We’re sure glad Randy Newman didn’t skip over the Valley when he wrote his ambiguous L.A. anthem and, arguably, his most well known song. The music video for “I Love L.A.” takes viewers from downtown to the beach, naming streets along the way as a background chorus enthusiastically responds, “We love it!” When it comes to the Valley, Victory Boulevard is represented when Newman drives his red 1955 Buick Super Convertible into the Valley Plaza parking lot.

After the ensemble cast of Paul Thomas Anderson’s Valley epic, Magnolia, sings Aimee Mann’s “Wide Up,” the rain clears over Valley Plaza, where a handful of Anderson’s flawed characters intersect. Shot in the northern section of Valley Plaza, adjacent to Sears, Linda Partridge (Julianne Moore) passes out in her car having taken heavy prescription medications intended for her ailing husband. When Dixon (Emmanuel Johnson)—the little kid who raps about “The Worm”—finds Linda unresponsive, he slides into the passenger seat, opens Linda’s purse and steals her cash. He also dials 911 on a cell phone before making his exit. Paramedics arrive and, at the intersection of Laurel Canyon and Victory Boulevard, the ambulance crosses paths with “Quiz Kid” Donnie Smith (William H. Macy). Some eagle-eyed viewers may have noticed that the Victory Boulevard street sign is swapped out for one that reads “Magnolia.”

Weed-smoking process server Dale Denton (Seth Rogen) and his burnt-out dealer Saul (James Franco) end up on the run after Dale witnesses a murder tied to Saul’s supplier. In order to raise some funds for bus tickets, Saul and Dale sell some weed to a group of teenagers. While Saul goes to get some celebratory Slushies, Dale is picked up by a school police liaison. When the police officer (Rosie Perez) involved with the earlier murder hears Dale’s name over the police radio, a car chase ensues along Laurel Canyon, through Alexandria Park and into the Valley Plaza parking lot.

Though devoted to his family, friends, and his church, Jon has problems with long-term romantic relationships. He’s a staple on the North Jersey club scene, and Internet porn outweighs the satisfaction he gets from real intimacy. While out clubbing, Jon spots Barbara Sugarman (Scarlett Johansson) at the bar. Unable to convince her to go home with him that night, Jon realizes he needs to go another route if he wants to date Barbara. He takes her to lunch and the movies, where he sits through a melodramatic romance called Special Someone. The movie theater scenes were shot inside the second-run Regency Valley Plaza 6, which opened in 1974 as part of the United Artists theatre chain. The theater is temporarily closed during the pandemic.

Freelance crime photojournalist Lou Bloom (Jake Gyllenhaal) has reached the top of his game when he sells crime scene footage of a triple murder/home invasion to an L.A. news station. Bloom then seeks out and tails the suspected killers to the Chinatown Express restaurant near 3rd Street and Western Avenue. Hoping to capture a confrontation on video, Bloom calls the police, informing them of the suspects’ location. When police arrive, a shootout ensues, killing a civilian and one of the suspects. Though the high-speed chase is supposed to progress into Hollywood, the sequence cuts from the Chinatown Express restaurant to Valley Plaza, where Laurel Canyon streets signs were changed to Western, and Kittridge Street was changed to Melrose. The sequence ends with a police cruiser and the suspect car flipping over at Laurel Canyon and Sylvan Street.

Los Angeles, 1967. Detective Sam Hodiak (David Duchovny) arrives at the scene of an extinguished fire at a South Los Angeles barbershop. Officer Tolson (Drew Powell) briefs Hodiak about Cassius, who was found inside the burnout store with two gunshot wounds to his chest. It turns out that Hodiak knows the victim. Determined to find out who killed Cassius, Hodiak turns his attention across the street to the headquarters of the Black Panthers, who have little interest in helping to solve the murder of Cassius. Instead, they demand Hodiak investigate the murder of a 15-year-old boy who’s been dead for three days with no follow up from police.

The film portrays the beginnings of the L.A. Riots after the not-guilty verdicts came down in the Rodney King trial in 1992. By this time, the pioneering hip-hop group N.W.A. had already disbanded over finances and contracts. Of note is the way director F. Gary Gray juxtaposes recreations of the riots with shots of Dr. Dre (Corey Hawkins) and Ice Cube (O’Shea Jackson) driving in separate cars, observing the burning and looting, but also the coalescence of rival gangs against the police. The sequence was shot at Valley Plaza along Laurel Canyon and Sylvan Street.

The small town of Orson, Indiana, is abuzz with excitement because a Hollywood movie called Flatlands filmed a third-unit, exterior establishing shot at a local diner. The Hecks head to the movies to see their town on screen. Their youngest son, Brick (Atticus Shaffer), has never been to a movie theater, so he learns about the covert art of sneaking in snacks like popcorn, pop, baked potatoes, and Milk Dudes, “the frugal Hoosier version of Milk Duds.” Brick also tries to sabotage the upcoming release of a film adaptation for sci-fi book called Planet Nowhere when the movie’s trailer doesn’t live up to his expectations.

When a Miami Beach pawnshop employee (Cathy Moriarty) recognizes a mug shot of Versace’s killer, Andrew Cunanan (Darren Criss), on TV, she calls the police who make a visit to the shop. Cash on the Beach was built into one of the vacant Valley Plaza storefronts along Sylvan St. The actual Miami Beach address for the pawnshop was replicated on the front door of the set: 243 71st Street An episode later, Valley Plaza doubles for a Florence, SC, where Cunanan stops at a Wal-Mart after committing multiple murders. There, Cunanan steals a license plate from another car before driving the final stretch to South Beach, Miami.

In this episode of Sneaky Pete, L.A. doubles multiple locations including Bakersfield, where Marius (Giovanni Ribisi) and Julia (Marin Ireland) stop off in a strip mall while on the way to search for Audrey’s (Margo Martindale) missing daughter Lila. Valley Plaza is also used as a “parking lot in Reseda” where an attempt is made to reconnect with Lila, only to turn into an ambush and car chase.

A search and rescue mission goes wrong on the planet Torfa, and Kree Star Force officer Vers/Carol Danvers (Brie Larson) is taken prisoner by the Skrull, a species of humanoid shape shifters. After making her getaway from the Skrull ship in an escape pod, the pod breaks up upon entering the atmosphere of Planet C-53 (Earth) and Vers crashes through the roof of a Blockbuster Video in 1995 Los Angeles. The shopping center, filmed at Valley Plaza, is complete with a pizza parlor, cleaners, movie theater, and a Radio Shack, where Vers commandeers a Nintendo Game Boy and connects it to a pay phone to call her commander in deep space. When the agents of S.H.E.I.L.D. arrive on-scene, Nick Fury (Samuel L. Jackson) questions Vers about her mysterious arrival.

When two corrupt L.A. County Sheriffs Deputies make a late-night traffic stop in a vacant shopping center parking lot, the confrontation turns sour when the deputies extort money from the female driver. One of the deputies is then ambushed and killed in an execution-style revenge shooting. This 13-minute opening scene of Nicolas Winding Refn’s slow-burn, L.A. noir miniseries was shot in a neon-lit Valley Plaza. You can also catch a glimpse of the Valley Plaza sign in “Volume 9: The Empress.”

A Hundred Years Ago, See’s Candies Launched in an L.A. Storefront