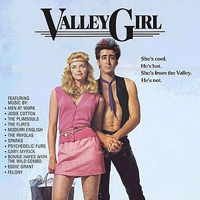 Long before Saturday Night Live’s The Californians parodied Angeleno speech patterns, Valley Girl defined mall rat culture on the big screen. Thirty years later, what started as a mash-up of Romeo and Juliet and Frank Zappa’s bopping single remains a cultural signpost. This Thursday, LACMA celebrates the film’s 30th anniversary (has it really been that long?!) with a special screening that includes a chat with director Martha Coolidge (who’s also responsible for the 1985 Val Kilmer vehicle Real Genius), a costume contest, and a reception (will there be sushi?).

Nic Cage and Deborah Foreman star in the film but L.A. and the San Fernando Valley are characters as much as cross-city lovers Randy and Julie. Here the cultural divide — perfectly expressed in the tagline: “She’s cool. He’s hot. She’s from the Valley. He’s not.” — is splashed with neon, pastels, and set to pop ditties like “I Melt With You” and “Johnny, Are You Queer?”

If you love filmspotting iconic SoCal locales, Valley Girl  is a goldmine. What’s become of these landmarks today? Let’s revisit Valley Girl‘s haunts and see how they’ve fared now that the DayGlo has faded.

1. The Mall
The shopping mall is a mecca for Valley Girl’s teen dreamers. This is where Julie breaks up with her meathead boyfriend Tommy, setting the stage for her romance with Randy who she notices at the beach. Often thought to be the Sherman Oaks Galleria (see below), the featured mall is actually Del Amo Fashion Center in Torrance, still alive and kicking.

2. Club Central
Randy and Julie introduce themselves at a house party in the Valley but soon steal away for a drive with his sidekick Frank and her reluctant safety blanket Stacey. The foursome drive around L.A., passing Grauman’s Chinese Theatre on Hollywood Boulevard and The Roxy on the Sunset Strip, before landing at Randy’s “home away from home,” Club Central. The space later became The Viper Room, which opened in 1993 and was tainted by actor River Phoenix’s drug overdose that Halloween. The West Hollywood venue is still popping with regular shows across the rock and alternative genres.

3. Du-Par’s
One of the spots featured during the obligatory montage of Randy and Julie flitting around town, Du-Par’s in Studio City gets the New Wave treatment thanks to Modern English. The restaurant and bakery is still open, one of five locations in California, Nevada, and Maryland. But will the waitresses stop the world to melt their pie for you? Probably not.

4. The Sherman Theatre
Also on Randy and Julie’s play date itinerary, there’s the Sherman Theatre; it hasn’t fared as well as Du-Par’s. The Ventura Boulevard theater closed later in the1980s, after serving primarily as a revival house and film festival venue.

5. Sherman Oaks Galleria
After Randy crashes the Valley High prom, he and Julie ride off into the night, passing the Sherman Oaks Galleria as they merge onto the freeway. It’s more symbolic of the film’s cultural backdrop than true to the filming process (see No. 1 for the actual shooting location). If you’re in the mood for your own Valley Girl tribute (after all, we haven’t heard a peep about a rumored musical remake since February 2012), the Galleria is still thriving just off the 405.