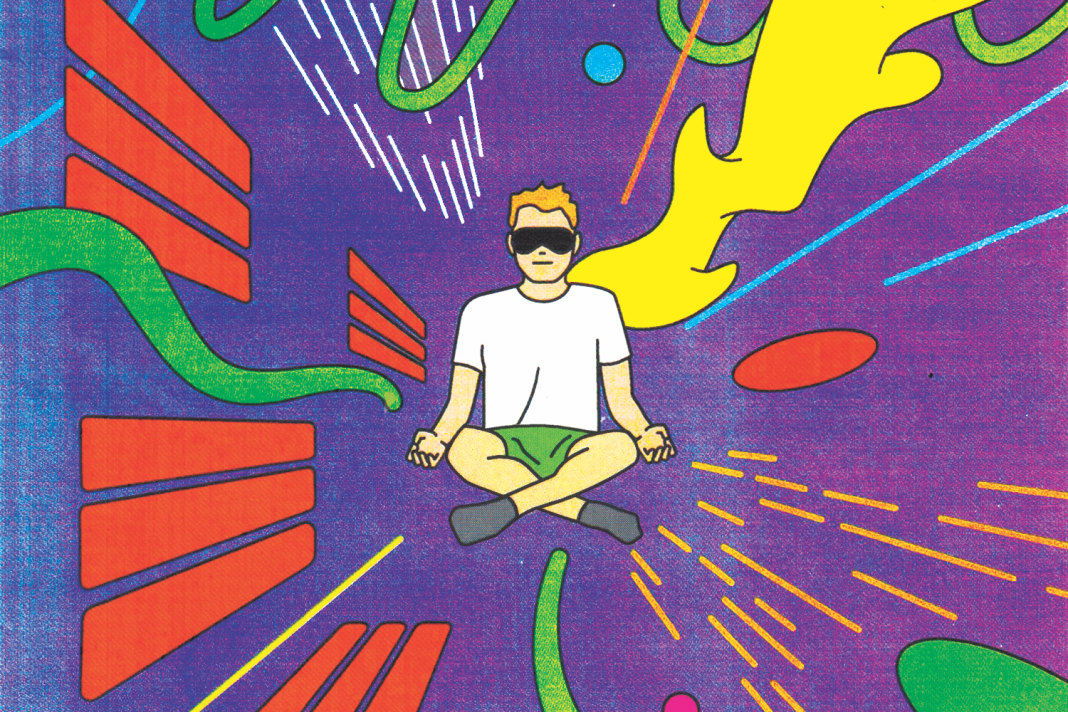 You’re ascending through a vortex of psychedelic color. It’s not unlike the phantasmagoric climax of Speed Racer, come to think of it, or the trippy 2001 “Star Gate” sequence, or even that super-disorienting boat scene in Willy Wonka & the Chocolate Factory: You’re engulfed in whirling checkerboard tunnels and vibrant flashes of blue and red, sizzling white and blistering orange—until everything goes black. You take off your eyeshade (oh, by the way, you were wearing an eyeshade) and remove your headphones (you were also wearing those), and a nice man with a fairly exquisite beard (who you definitely caught recording a Facebook Live video about his “biohack of the day” right before this) opens the lid of the rotating pod you’ve been lying in for the past half hour and asks how you feel. You sit up and mumble unintelligibly because what you just did was unlike anything you’ve ever done before.

Such singular experiences are the norm at Upgrade Labs in Santa Monica, a gymlike facility devoted to biohacking—“the art and science of becoming superhuman,” per the company’s website—that was founded about a year ago by longevity obsessive and Bulletproof Coffee prime mover Dave Asprey (who has reportedly spent upward of $1 million on hacking his biology). It’s the first in a chain of such outposts that will soon stretch across at least the wealthier neighborhoods of the Los Angeles basin, beginning with a state-of-the-art center (set to open by year’s end) inside the Beverly Hilton hotel and another soon thereafter in West Hollywood. The propagation of Upgrade Labs is part of a mission, according to CEO Martin Tobias, to bring the wellness-boosting fringe technology employed by pro athletes and the ultrarich to the (relatively affluent) masses. At $50 a pop for an individual hack or five grand for a curated “stack” of therapies, options include atmospheric cell training, pulsed electromagnetic field pick-me-ups, cryotherapy, and vitamin cocktails designed for injection straight into your veins.

Of all the treatments, though, the lab’s waterless virtual float tank is perhaps the most intriguing. Word on the street is that the contraption stimulates relaxation and creative drive by, essentially, syncing your brain waves. The eyeshade is fitted with pulsing LEDs that blast white light through your closed eyelids. The headphones pump out binaural beats. The whole experience begins as sensory overload, but, for some at least, it eases into a profoundly relaxing, mentally rejuvenating experience. (If you talk to the folks at Upgrade Labs for any amount of time, you’ll likely hear the story of a person who emerged from the pod in tears, claiming to have encountered God.) All this occurs because, purportedly, the rhythms of light and sound bombarding your sensory organs are specifically attuned to encourage one elusive thing: the production of theta waves in your brain.

Fascination with brain waves and their corresponding states of consciousness is nothing new. German psychiatrist Hans Berger discovered electroencephalography (or EEG) in 1924 as a means of measuring the tiny oscillating voltages in the brain, and his innovation was soon used to show that electrical brain waves exist on four primary frequencies. Beta is the fastest, oscillating around 13 hertz and higher, followed by alpha at 8 to 13 Hz, theta at 4 to 8 Hz, and, finally, delta at 0.5 to 4 Hz. Each of these brain-wave states is correlated with a different sort of consciousness. If you’re awake, alert, and engaged in conversation, you have a lot of beta waves going on. Fast asleep after the last three sentences? You’re exhibiting a boatload of delta. Alpha waves occur when you’re daydreaming, while theta waves, precious theta waves, show up en masse when you’re in that hypnagogic twilight zone between sleep and waking. Theta waves are the key to transcendence.

“Many people have already experienced transcending, but they may not realize it,” filmmaker David Lynch writes in his book Catching the Big Fish: Meditation, Consciousness, and Creativity. “It’s an experience that you can have just before you go to sleep. You’re awake, but you experience a sort of fall, and you maybe see some white light and get a little jolt of bliss. And you say, ‘Holy jumping George!’” That trancelike feeling unique to a preslumber theta brain state can also emerge when you’re operating on autopilot—say, taking a particularly relaxing shower or driving west on the traffic-free 10 at night with what Joan Didion described as “concentration so intense as to seem a kind of narcosis, a rapture-of-the-freeway.” The creative “flow” exhibited by jazz musicians, freestyle rappers, and CEOs who say they’ve quintupled their productivity is also linked to brain waves at the border between alpha and theta. Theta waves signify that you’ve eased into a nonjudgmental headspace and are susceptible to bursts of creativity.

Accessing a theta state on demand can be tricky business, but the most tried and somewhat true way of doing so is via meditation. Research into different states of consciousness determined by brain-wave frequency kicked into high gear in the 1960s; findings indicate that those who meditated would slip down through the brain-wave tiers from beta to alpha, then to the border of alpha and theta, and finally, for Zen masters, into theta. It’s no coincidence, then, that those seeking access to uninhibited creativity—artists, musicians, filmmakers, etc.—have gravitated to meditation as a mode of accessing a theta brain state. Lynch (whose oeuvre of films and TV shows, including Mulholland Drive and Twin Peaks, demonstrates an uncannily intimate connection with the creative subconscious) is the poster child for Transcendental Meditation (aka TM). The Beatles’ White Album was born of a meditation-focused trip to India. Leonard Cohen spent five years living at a Rinzai Zen monastery on Mount Baldy, packing notebooks with poems. But the benefits of meditation are advantageous to anyone whose work demands imagination.

Theta waves signify that you’ve eased into a nonjudgmental headspace and are susceptible to bursts of creativity.

“I create for a living,” says author and podcaster Mike McHargue, who has sustained a daily meditation practice for five years and recently produced a video workshop on the subject. “I would not be able to do what I do without not just a meditative practice but a varied meditative practice.” Granted, meditation is often rough for the inexperienced. You have to sit very still—without opening your eyes, without reacting to the urgent thoughts that crop up, and without going on Twitter even once—and you have to do it on a disciplined schedule. “What we understand from research,” McHargue notes, “is consistency is what maximizes the benefits of a meditative practice.”

Services have emerged to make the habit easier. The Headspace app has skyrocketed in popularity (as of last year, Forbes valued the Santa Monica-based company at $250 million), and meditation classes are now ubiquitous. Sensory deprivation tanks—which remove all distraction and discomfort from the meditative process—have cropped up everywhere from Torrance to Pasadena. All these ancillary techniques facilitate relaxation, but you still have to do the work of meditating consistently to hit that theta sweet spot.

But where there’s difficulty, there are tech bros convinced they can circumvent the pain component of gain. That’s where Upgrade Labs comes in, bringing a hacker mentality to the world of health and wellness. The facility, I’m told, boasts a machine that provides the hormonal perks of a three-hour workout in 20 minutes; another supposedly accomplishes a week’s worth of weight training in 12 minutes. “It’s, like, ‘I want the benefits, I want to use the technology, I don’t want to take all the time,'” Tobias says. Thus the sensory stimuli of  Upgrade Labs’ virtual float tank theoretically encourage the brain to emit waves at the theta frequency, inducing a comparable brain state to that produced by deep meditation and sustaining it for longer. If that truly is the case, it stands to reason that the benefits of meditation—including reduced stress, improved capacity for learning, and the feeling of reentering the world with a renewed creative drive—would be enhanced.

“I meditate with a TM-type of mantra,” tobias says. “When I do that for half an hour, if I had my brain in a brain scan, you would see that my brain was in the theta maybe two or three minutes of that half hour. In a half hour inside that thank, I am in theta for 25 minutes.” McHargue, who tried a version of the tech employed at Upgrade Labs, still favors the scientifically vetted 15-minutes-a-day, six-days-a-week approach to meditative theta access, but he sees the assistive technology as a boon for anyone struggling to jump-start a practice. “If the experience is good and they go weekly and see the benefits,” he says, “they might start taking the training wheels off and trying traditional meditation, which has the nice side effect of being free.”

Obviously, the proprietors of Upgrade Labs would love for you to make a daily habit of meditation in their pricey virtual float tank—Tobias laughs as he points this out. But given, you know, realism, he thinks it’s more practical to approach the experience as a training exercise: a tech-enabled foretaste of transcendence to spark a more efficient meditative pursuit. For those who have trouble even knowing what they’re looking for while meditating, it can open the door to the kind of deep relaxation and unbridled creativity that come with a theta brain state. “Being able to reliably access theta is a skill,” Tobias says, “and I think it’s something that is every human’s birthright.”

A Look Inside The New, Futuristic Shopping Area in DTLA