Home Dance The Music Center Is Hosting the U.S. Premiere of a Dance Reinterpretation... 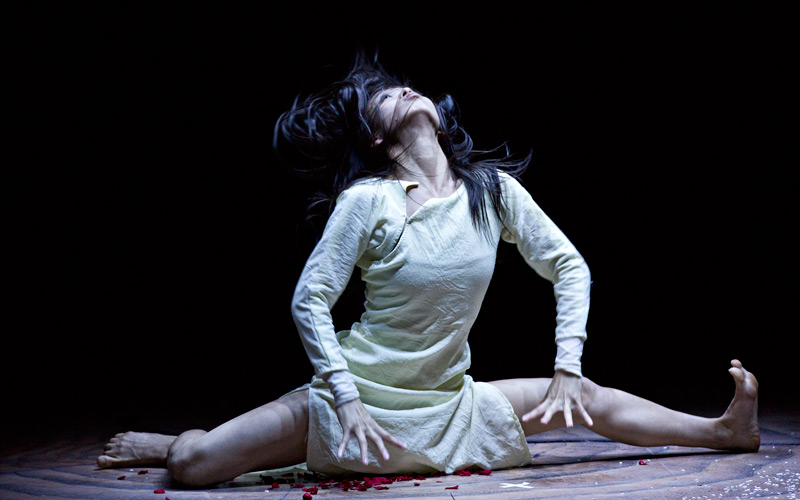 Indian classical dance meets contemporary dance at the Culver Studios in Culver City beginning tonight, when the Music Center presents choreographer and dancer Akram Khan’s U.S. debut of Until the Lions. The production has traveled the world since 2016, from Australia to South Korea, and its arrival in L.A. for four shows marks one of the last times the award-winning founder of the London-based Akram Khan Company will perform in a full-length work. (“It’s bloody hard…I’m 43,” he says.)

Until the Lions, which stems from an ancient Sanskrit poem called the Mahabharata, tells the mythological tale of a woman named Amba, who’s transformed into a male warrior named Shikhandi, who seeks revenge against an imposing figure named Bheeshma. “It’s about the role of women in society, it’s about the alpha male syndrome, it’s about how I feel the world is today,” says Khan, who portrays Bheeshma. Sound familiar? You bet.

Drawing attention to the female perspective and gender imbalance is Khan’s goal here. His mother, who was “always fighting for the underdog,” was a powerful influence. As a kid, he also found inspiration in everyone from Charlie Chaplin and Fred Astaire to Bruce Lee and Michael Jackson.

We spoke with Khan as he was pulling up to the Culver Studios about 24 hours before opening night.

Can you briefly describe this excerpt you’re depicting from the Mahabharata?
You’re talking about an impossible task. It’s the longest poem in the world. It’s the longest narrative in the world, actually. “Epic” in a true sense. If I really simplified it, I would say it’s about a woman who falls in love, who is betrayed by someone of authority, and then she seeks revenge. She seeks justice, and when she doesn’t get it, she seeks revenge. When I was creating Until the Lions, I was psychologically also conscious of Giselle, which I was going to create after Until the Lions and which I made last year for English National Ballet. With Giselle, it was love, betrayal, and then forgiveness. With Until the Lions, it’s love, betrayal, and absolute revenge.

Why is this piece so compelling for you?
Karthika Naïr is a poet and a writer, and she was creating a book with a collection of her poems that were a response to female characters in the Mahabharata, and she knew I was always very fascinated and curious about the female characters. I’ve found them far more fascinating than the male characters, the male heroes, in the Mahabharata. Perhaps that’s because of my upbringing, being so close to my mother, who was strong. And I have a daughter, who was born in 2013, and I started to think of the world through her eyes, just trying to imagine what it would be like, and it’s quite scary. So I thought mythology was a way to remind ourselves—I think we’re digesting the wrong kind of mythology right now.

How so?
Well, brand mythology, corporate mythology, political mythology—need I say anymore? You know, people creating their own mythology because they have huge amounts of money. So what I’m interested in is returning to traditional mythology, older mythology. This piece is about reflecting on the old mythology and seeing how relevant it is to now, and of course it’s relevant: There’s an imbalance in gender, and there always has been for most parts of our civilization.

This piece is called Until the Lions because that’s the name of Karthika Naïr’s book. She proposed that I look at the poem of Amba, this particular character, and asked me if I would create a response to it. And of course when I read it, I was ecstatic. I saw movement. The poem was so visceral for me. [There’s the African proverb] “Until the lions…” The hunters will always write history and tell the story; the hunted will not, the victims will not. So it was through Amba’s eyes that I wanted to explore the narrative. The problem with older mythology is that it’s written mostly by men, through the male gaze. Why do you think Eve is the baddie or Mary Magdalene is the baddie? In most of the mythologies, it’s the female who’s the culprit. They’re written through a male gaze, a male perspective. So I really wanted to explore this through Amba’s perspective.

She was abducted by a very powerful alpha male warrior who has huge respect, and she thought she was going to marry him. Then she realizes he’s taken her to marry somebody else; he’d taken a vow of celibacy, and he would never marry or have children. She refuses to marry the other man. She says she’s not a prize, she’s not a toy, she’s not a possession. She had been due to marry somebody else, so my character, the alpha male, says, “Why don’t you go back and marry the one you had been bestowed to originally?” So she goes back, but the man won’t marry her because he is afraid of [the alpha male] Bheeshma and his authority and his power. So she comes back and says, “Look, nobody’s going to marry me. You’ve ruined my life. You marry me.” And he says, “I will not marry you”—because he’d taken an oath that he would not marry anybody and he would be celibate. So she says, “Is your vow more important than my life?” He says, “Yes.” So society looks badly at her because she went up against him, she confronted him, even if it was for justice. So she decides to seek revenge, to kill him for ruining her life. If she wants to kill him, she must fight him in battle, and to do that, she must become a male. So she must kill herself and be reborn again.

What kind of choreographic movement do you use to tell the story?
The gestures are taken from Indian classical dance, kathak. It’s very explosive movement. I move in a very physically dynamic way. I draw a lot from traditional Philippine dance, from Japanese folk dance. I draw from a lot of different vocabularies, different forms. My training is Indian classical dance and also contemporary dance, but I draw from the dancers as well. One of the dancers is American Filipino, and the other dancer is from Taiwan, and my wife is Japanese, so a lot of that seeps into the work. And we have some Indian martial arts movements in the work.

It’s fascinating how dance and movement and storytelling can bring people of all backgrounds together.
Dance has far less barriers than theater or film. In dance, we don’t look for looks. It’s not about what color skin you have to play that particular character. It’s about what your body brings and what your culture brings. We write scripts through the body. We create scripts using the body. The scripts are not made by somebody else; they’re made by us, the collaborators, the people in the studio, the dancers, the musicians. The point is not to explain everything because it’s impossible to, unless I was going to make a piece of ballet. Ballet is literal, and contemporary dance has the possibility to be ambiguous. That’s the power of contemporary dance.

Why bring this piece to the United States now, and why to Los Angeles?
For me it’s just a beautiful cycle to return to L.A. My company has been here several times—at UCLA, at the Skirball—and I was here as a child doing the Mahabharata with [British theater and film director] Peter Brook in 1987, 1988. I’m so excited. It’s a masterpiece; it’s a very sacred work.

How do you balance your two roles as dancer and choreographer, or are they intertwined?
It’s hard. I think the hardest is being a dancer. The training—you have to work much, much harder than when you were younger. My training is severe right now.

RELATED: What Really Happens at a Ballet Audition

Need Some Inspiration? Watch Over 3,000 5th Graders Dance in the Music Center Plaza

Cinderella Swaps Her Glass Slippers for Pointe Shoes, Making Her Debut at the Music Center

Banksy, Streisand, and Houdini: Three Great Nights at the Theater