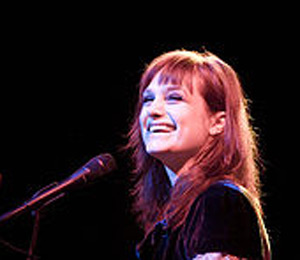 Singer-songwriter Landon Pigg began his set at The El Rey Theater on Tuesday night by asking the audience if they wanted to hear rock, or if they wanted to hear folk. The answer didn’t matter to A Fine Frenzy’s Alison Sudol. She took the stage and weaved wistful, folksie ballads from “One Cell in the Sea” and high-energy, head-nod inducing beats from her new album, “Bomb in a Birdcage”.

Although Alison Sudol isn’t the most verbal performer, her body language during the rock numbers was engaging. Grooving to her own rendition of “Glass” by Blondie, and bouncing and flitting across the stage during “Happier” and “Electric Twist”, she seemed so entranced by the music that at times she may very well have forgotten about the live audience at her feet.

When A Fine Frenzy slowed down for “Almost Lover”, the most emotionally vulnerable song on her first album, the entire audience held it’s breath, waiting for her to belt out the angst-ridden melody. Instead, she choked on her first few words and got everyone chuckling at the “thing” that was apparently hiding in her throat. When she resumed, her distinctively haunting voice cleared, the heavy atmosphere returned. She handed the vocals over to the audience for the final choruses, and she almost teared up as we serenaded her with her own lyrics.

So did we want rock or did we want folk? Maybe a mix was best.  While A Fine Frenzy’s second album indicates a progression towards loud guitars and forceful backbeats, the songs that stole the show were playful and poetic. Those were the melodies that linger in my mind, even now.