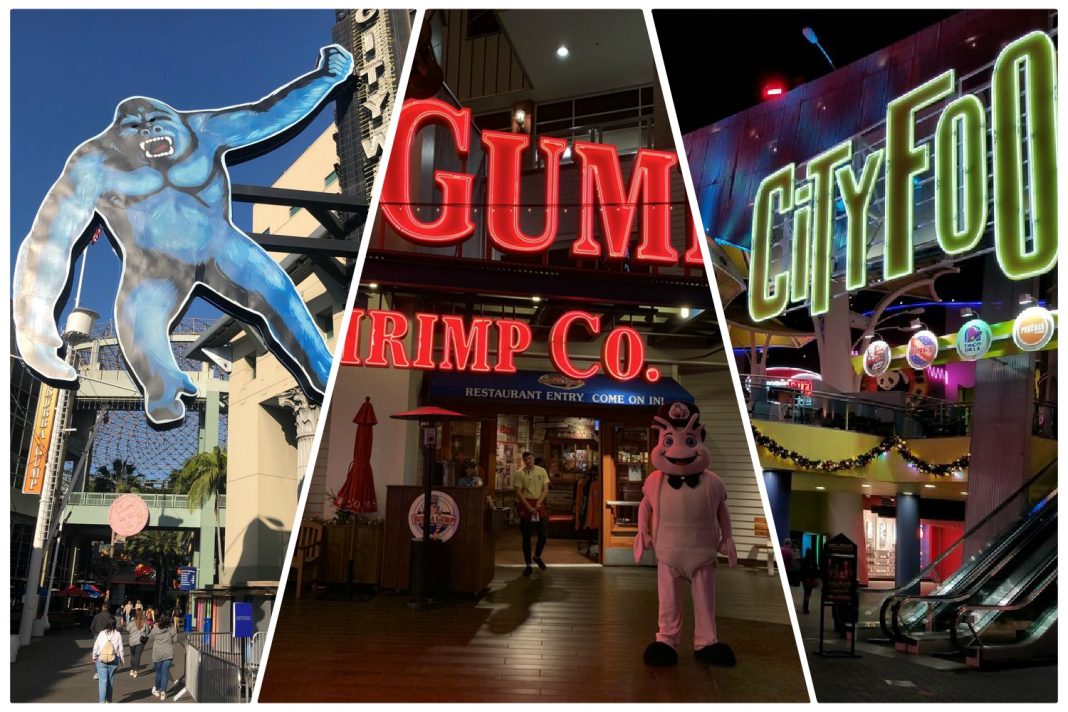 If Foursquare were still a thing, local writer Bethy Squires would be the mayor of Universal CityWalk. Squires does her writing, people watching, and errands (Hot Topic, mostly) at the theme park-adjacent outdoor mall, which may seem to exist on a different time-space continuum than the rest of the city but has managed to become part of the fabric of L.A.

“I come here when I need an emotional change of pace,” she says as we sit inside Bubba Gump Shrimp Co., stirring our lemonade coolers and enjoying kitschy ephemera themed to the 1994 movie that inspired the restaurant chain.

Squires suggested meeting at CityWalk in the middle of a weekday, something I’d never done before. It felt thrilling, like I was playing hooky from life as we watched the crowds go by. It’s consistently a great place to tap into that pleasant tourist feeling, all while enjoying the high-quality WiFi in the frequently empty food court. Squires makes a compelling case for using the mall as a remote office: Why not come to the park, do some of your creative work, and ride some rides if you have an annual pass? It’s literally on the Red Line.

There are other reasons to make the journey. CityWalk, after all, is a hallucinogenic facsimile of the ’90, a fever dream where a shopping center meets a Nickelodeon sound stage. And while some locals surely hate the place and what it represents, many go out of their way to bask in its fluorescent glow.

The show Podcast: The Ride aired a 19-part series on the the hokey shopping/dining destination (the entire series clocks in at more than 24 hours) with juicy glimpses into its history and bygone tenants, from John Lovitz’s former comedy club to a restaurant called Wizardz, which now serves as CityWalk’s sheriff’s station. A character who guides listeners, named the “sector keeper,” is actually a child trapped in a “ghost oblivion state” after getting a staph infection in CityWalk’s dancing fountains.

After listening to a few episodes, I excitedly called up the show’s creators, Scott Gairdner, Mike Carlson, and Jason Sheridan, wondering what led to their obsession. “I grew up in the Valley and went to CityWalk a ton as a kid in high school and college,” says Gairdner. “There was a slow gradient from ironically to genuinely loving it.”

Erin Gairdner at CityWalk, 1995. Behind her: a store we missed. Alert the Sector Keeper- we gotta go back in… pic.twitter.com/pox6X19NMy

Today, Gairdner says he loves the mall because it embodies a dream of the ’90s. “The aesthetic of the 2010s seems more minimalist and tasteful, which can border on boring,” Gairdner says. “But the ’90s and early 2000s have all the aesthetics yelling and screaming at each other.” It can be hideous, yet also weirdly beautiful.

“There was a slow gradient from ironically to genuinely loving it.”

Gairdner tells me that besides Lovitz’s defunct comedy club, there was also a Marvel Mania restaurant that served up dishes like “Dr. Doom’s Mostaccioli.” You could even take screenwriting classes at a UCLA Extension school that overlooked the dancing fountains. In other words, it was always meant to feel like an idealized version of an actual city (within a city that’s actually a studio). MCA development, which created the mall, touted that CityWalk would be free from the social ills that afflicted greater L.A. Regarding Venice Beach, MCA company head Lawrence Spungin told the Times, “There’s somebody on every street corner with a ‘Work for Food’ sign. It’s not fun anymore,” while a leasing director was quoted saying he didn’t need “the excitement of dodging bullets” to make the trek to Melrose.

“I don’t need to go to a Third World country,” he said.

An L.A. Times article published shortly before CityWalk’s opening spelled it all out in black and white: “Tired of feeling guilty about the homeless? Weary of fighting traffic or worrying about crime? When CityWalk opens this fall, its creators promise a poverty-free pedestrian promenade with plenty of parking and a sheriff’s substation on the premises.” In other words, who needed to venture into a real L.A. neighborhood when a mall could provide a similar experience, complete with stylized graffiti and Universal-hired street entertainers?

Unsurprisingly, though, CityWalk’s separatist ethos and faux urbanity didn’t sit well with many locals. Mike Davis, author of City of Quartz: Excavating the Future of Los Angeles, described the complex in a 1993 Mother Jones article as an “ominous parallel universe.” He added, “MCA executives have always stressed the most popular parts of L.A. are now too dangerous; the city scene is a criminalized Third World. So now they go off the real world to simulators.”

John Stenger, author of Hollywood Goes Shopping, saw CityWalk as an “escape” from the reality of an L.A. that was in turmoil just a year after the Rodney King riots. (Even Variety unironically hailed the center’s debut as a “controlled environment success!”)

The mall’s geographic isolation, perched on the Hollywood Hills, helped it cater to an upper-income crowd, but also gave it a local reputation as a kind of poseur that didn’t fit into the rest of the city’s urban geography. In Hollywood: Space, Power and Fantasy in the American Economy author Aida A. Hozic described it as “admittedly not open and available to everyone.”

But that same isolation gave CityWalk a chance to try out big and experimental ideas—like impaling buildings with spacecrafts, foodstuffs, and a ’57 Chevy. And those who paid close attention to CityWalk’s offerings at the time found a lot more than the usual mall fare. GLOW was an emporium of fluorescent posters, T-shirts, and stickers that also improbably featured an L.E.D. artwork by the neo-conceptual artist Jenny Holzer. A store called Natural Wonders offered a walk-through rainforest, complete with mist.

This was an era when themed restaurants—like Planet Hollywood and Steven Spielberg’s nautical-themed Dive! restaurant at Westfield Century City—were all the rage, but malls were more humdrum affairs: they didn’t try to look like Main Street in Disneyland, with its standalone buildings, nor did they market themselves as experiences. CityWalk, in contrast, was a “three-dimensional cinematic space,” as Stenger put it, built to produce awe.

A hallucinogenic commercial from nearly 20 years ago drove this point home. Featuring tribal beats and footage of the dancing fountains intercut with inspirational phrases, a voiceover instructs the viewer to “go deep within your soul,” offering up CityWalk as a kind of spiritual salvation.

In 2019 it’s odd to think of all the controversies that once roiled one of L.A.’s wackiest sidesteps. It seems weird to demand so much from a place that only wants to feed you doughnuts and give you a water massage. Or, as Podcast: The Ride host Jason Sheridan says, “I think there are a lot more pressing issues in L.A. today than CityWalk.”

RELATED: We Need to Know: Who’s Hanging Out at the Capital One Café?