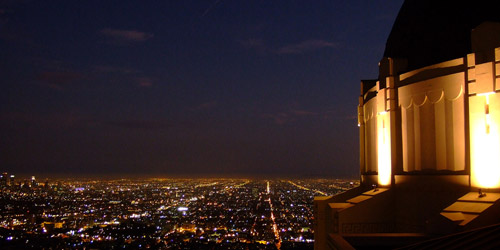 It’s not every night that the Mayor is out and about and there’s a Ring Cycle celebration going on. Okay, so there’s been a lot of those nights lately, but Cosmic Conjuction 2010: Diamond Nights + Northern Lights, the Griffith Observatory’s 75th anniversary gala held Saturday night in Griffith Park, was really something special.

Tom LaBonge was there, as was Mayor Villaraigosa, Adam Schiff, Barry Sanders, and actor Edward James Olmos to help raise funds for the famous science center. After a Wolfgang Puck-catered dinner, local teacher Mark K. Hummer and one of his students, Bailey Magano, waxed philosophical—and downright cute, respectively—about the significance of the observatory as an education center. A late-night showingof Light of the Valkyries, the new light show set to Wagner’s Ride of the Valkyries, was beautiful and fun, but it was catching the stars twinkling through a thick layer of May fog from the observatory’s perch above the city lights that reminded me just how big the universe is, and how precious public spots with shared history can be.