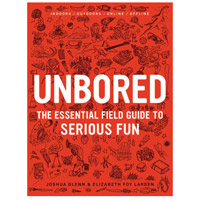 It’s a book! It’s a guide! It’s a way of life! It’s Unbored: The Essential Field Guide to Serious Fun, a new children’s activity book that aims to reinvent the way families play. It’s a lofty goal, but dynamic duo Joshua Glenn and Elizabeth Foy Larsen – he’s the editor of Hilobrow and she has written extensively on children and family life – are doing it all in the name of fun. Unlike activity books aimed at “daring girls” or “dangerous boys,” their creative take on playtime is targeted to kids of all predilections.

Collaborating with over 30 crafters and inventors including Deb Chachra, an engineer who’s fascinated by the connection between music and technology, and cooking geek Jeff Potter, Glenn and Larsen introduce a hands-on approach to family time. Kids can consult the big book of Unbored simple activities that require nothing except imagination. From backyard parkour and gross facts about bedrooms to solar iced tea and short-sheeting, Unbored is an encyclopedia of things you never knew as a kid—and you’ll be excited to discover as an adult. We chatted with Glenn about the impetus for his book, the current wave of “childhood nostalgia,” and his favorite way to stay un-bored.

There are a lot of children’s books similar to yours. What sets Unbored apart?
JG: A lot of books are a nostalgia trip for the day when kids weren’t as supervised, when they could explore and do any activities they wanted outside. I’m not a helicopter parent; I like to let my kids go out and explore. People would give these kinds of books to me because they thought I would enjoy them, but it turns out that I didn’t. A lot of the activities were camping or making bows and arrows, and that isn’t what urban families do anymore. [Elizabeth and I] wanted to do a book that celebrated childhood imagination and freedom. We wanted activities that weren’t too difficult, didn’t take a long time, and didn’t require any special knowledge.

Was there a specific impetus for the book?
JG: It was inspired by a 1995 sci-fi novel called The Diamond Age by Neil Stephenson. In the book, there’s a young girl who gets her hands on an interactive book that trains her how to be a leader of society by encouraging her to develop advanced thinking skills and the ability to think adaptively and flexibly. We thought it would be cool if a book like that existed in the real world.

How did you come up with some of the ideas and activities in Unbored?
JG: The book blends the “best of the old” and the “best of the new.” A lot of the ideas came from things we did as kids and things that we do with our own children. We also went looking for cutting-edge, 21st century ideas like yarn bombing, where you make graffiti out of knitting. There’s also geocaching, which turns the outdoors into a video game by requiring you to use GPS or your mobile phone to find hidden treasures that other people have left for you in parks and woods.

Did you have a favorite activity in the book?
JG: One of my favorites is making an LED “throwie.” I learned this from the Graffiti Research Lab, which makes innovative non-paint based graffiti. They came up with the idea of attaching a little LED light bulb to a round watch battery and taping that to a strong magnet. You can throw them onto metal objects and they’ll glow beautifully for 24 hours. It’s a very attractive form of graffiti, and you can take it down when you’re done. It’s slightly technological, slightly crafty, but also very wholesome; it’s not causing any trouble at the end of the day.

Speaking of technology, how has it affected the way kids spend their free time?
JG: It’s caused a lot of anxiety in parents, including me. When they turn 8 or get into their teenage years, they tend to disappear into screens—TV, computers, video games. A lot of parenting books are anti-technology, which I think is unrealistic. Kids enjoy technology, it’s everywhere, and it’s relevant. It’s hypocritical for us to restrict them, since we’re on it and connected all the time too. [My wife and I] aren’t against those things. We just think it’s good to be thoughtful about it, which is why we included it in a way that can be enjoyed as a family. It’s also great because a lot of parents fall behind the curve technologically, and a tech gap develops between parents and kids. There’s already a gap between them; we don’t need another one.