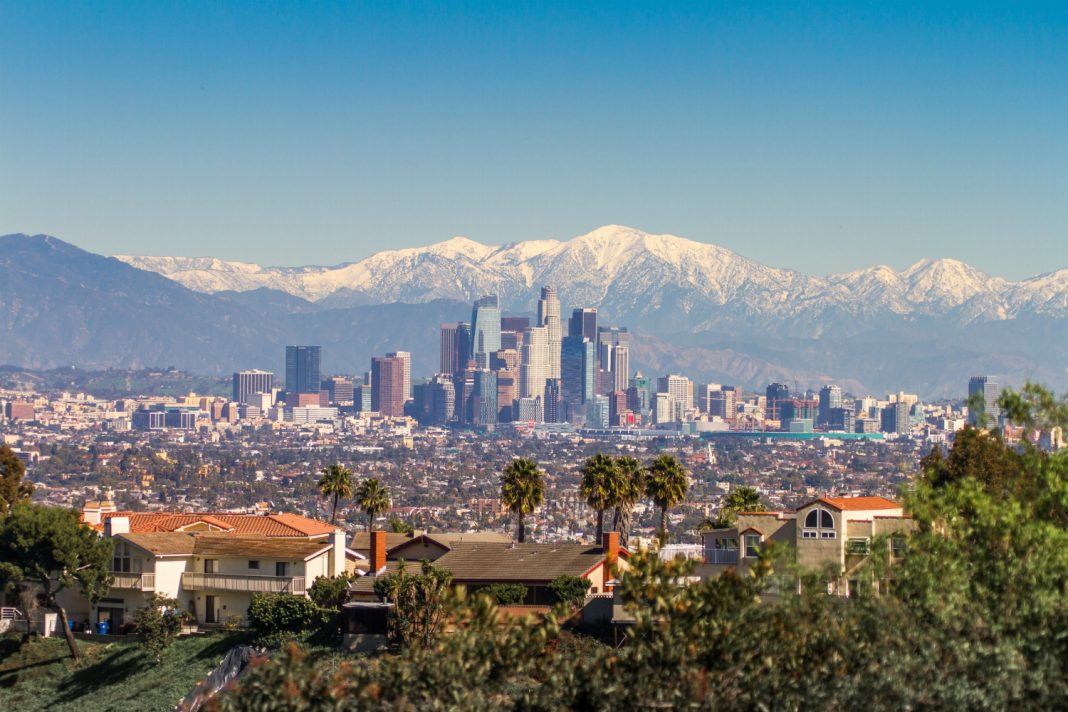 Four seasons. 52 weeks. 365 days. Consider this list of must-do L.A. experiences your guide to becoming the ultimate Angeleno in one year.

1. Spin to Win on Wheel of Fortune

So you’ve stood in line for The Price Is Right, and Jeopardy! hasn’t acknowledged your genius? Try your hand at getting invited into Pat and Vanna’s house for a game of hangman.

How to do it: Apply online at wheelofortune.com. If you get called into a group audition, proctors will gauge your passion for yelling letters (louder = better), your puzzle-solving skills, and how well you can spin a mini version of the wheel. Ace that, and you’ll be buying up vowels in no time.

2. Take a Beer Tour in Torrance

How to do it: Map out your own DIY itinerary using labrewersguild.org, or book a seat on one of L.A. Beer Hop’s guided brewery tours, which hit the area’s top taprooms and serve up a flight of beer at each stop.

3. Be an Awards Show Seat-Filler

Unless you’re related to an academy staffer or are a PwC accountant (or you’re Meryl Streep), you can forget about sitting front row at the Oscars. The Emmys? More realistic.

How to do it: Apply through seatfillersandmore.com, where you’ll fill out a form and submit a pic. If you land the gig, you could end up rubbing elbows with Kit Harington while the rest of the Game of Thrones cast hits the loo.

4. See Some Shakespeare at Theatricum Botanicum

There’s no other outdoor theater venue quite like Will Geer’s 299-seat Theatricum Botanicum. Marrying Topanga Canyon’s trademark kook with lush SoCal beauty, it’s the ideal spot for a shot of Shakespeare.

How to do it: Pack some blankets and seat cushions (or rent the latter for $2) and leave plenty of time for a pre-show dinner of truffle risotto beneath a canopy of sycamores two miles down the road at the Inn of the Seventh Ray. Don’t miss the signature production of A Midsummer Night’s Dream.

How do you improve on a place where the most obsessive designers in the world have perfected every detail? Hire an elite plaid-clad VIP guide to plan a day around your interests, share the park’s history, and bring you to the front of the line at 30 attractions. Want to meet characters? They’re waiting for you. Fireworks? You have a prime viewing spot.

How to do it: For the full VIP treatment, the fee runs north of $2,550 for you and up to nine friends, not including park admission.

RELATED: 4 Ways to Get the VIP Treatment at Disneyland

6. Play the Ponies at Santa Anita

The world’s most famous Thoroughbreds have pounded the dirt oval under the San Gabriel Mountains for more than a century. Even if you don’t think much about horse racing, a visit to one of the country’s most gorgeous tracks is worth your time.

How to do it: Live racing at the pink-and-green Art Deco facility starts up again at the end of September. Travel Route 66 (aka Huntington Drive) and fuel up at the Derby, a vintage dinner house once owned by Seabiscuit’s jockey, to see plaques celebrating equine achievements.

7. Laugh at Comedy Greats at Largo

The cheap shows at Upright Citizens Brigade are tough to beat (and often come with a surprise A-list performer or two), but shell out a bit more at Largo at the Coronet and you’ll get a show that’s reliably packed with powerhouse talent.

How to do it: The theater’s calendar is always up to date with various comedians’ monthly engagements, from Patton Oswalt and Sarah Silverman, to Nick Kroll and Tig Notaro. Expect them to bring some famous friends (that’d be equally hilarious comedians).

8-9. Get Spooked at a Magic Castle Séance

Hidden upstairs in the Hollywood magic club is a parlor lined with portraits, handcuffs, and other treasures from the life of Harry Houdini. Play your cards right, and you can join a medium in summoning the escape artist’s spirit. After a four-course meal, the lights dim, and things get weird.

How to do it: You need an invite to visit the castle, but not for séances. The trick? They’re for groups of 10 to 12, require a reservation, and start at $135 per person.

Did you know? There are ways to see Magic Castle magicians outside of the club. It’s true: The magic-themed bar Black Rabbit Rose employs some of the institution’s legendary talent Thursday through Saturday, including Liberty Larsen, a fourth-generation magician and part of the Castle’s founding family.

RELATED: Revealing the Secrets Inside the Magic Castle

If you did Universal Studios’ tram tour a decade ago and think you’re set for life, you’re missing out on its glow up. Ride operators (yes, it’s technically a ride) give you 3-D glasses for King Kong and Fast & Furious themed experiences that are a nod to 21st century movie magic, but old stalwarts still abound: You’ll see a working back lot and the sets from films like Jaws and Psycho, complete with animatronics, pyrotechnics, and waterworks.

Warner Bros Studio: A recent 25,000-squarefoot expansion includes “Stage 48,” where you can step into Central Perk from Friends.

The Studios at Paramount: It’s the place from which Lucille Ball ran Desilu Studios and where Star Trek and Rear Window were shot.

Sony Pictures Studios: See the spot where Dorothy clicked her red slippers, not to mention a 94-foot-tall man-made rainbow.

Indoor: In terms of modern-day moviegoing, no chain can compare to ArcLight Cinemas when it comes to sound quality and crowd control. As for throwback experiences, hit up any of our plush, gilded movie palaces. Hollywood’s El Capitan and Westwood’s Village Theatre are spectacular for new releases, while the L.A. Conservancy shows classic films in even more historic venues like downtown’s Los Angeles (pictured) and Orpheum theaters during its Last Remaining Seats series. You can also catch a variety of live performances—podcast tapings, concerts—at Theatre at Ace Hotel, itself a former United Artists screening room.

Outdoor: Most every place from hotels to ice cream shops to retail spaces hosts alfresco screenings these days, but they’re not all created equal. Cinespia’s BYOPicnic events at Hollywood Forever Cemetery are actually worth braving the crowds for, and nobody else puts you above the city like Rooftop Cinema Club, which shows blockbusters and older gems atop NeueHouse in Hollywood and LEVEL downtown. The roving Eat See Hear series pairs its flicks with mini-concerts and a cavalcade of food trucks, while Mr. C’s poolside showings help you beat the summertime heat. If seaside screenings are your thing, Beachfront Cinema in Huntington Beach does it up right—pack a blanket and a chair, or recline on one of their jumbo beanbags.

In-Between: Just when it looked like the drive-in had headed into its last sunset, the genre’s seen a revival. On the Eastside, you can roll up to the Electric Dusk Drive-In, returning to the Van de Kamp Innovation Center campus this fall. Roll down to Paramount to witness the glorious return of the Paramount Drive-In, back in action after a 22-year “intermission,” as they call it. Over in Montclair, the Mission Tiki Drive-In sports four screens and Polynesian decor; or make tracks for the City of Industry, where the Vineland has been putting on shows for 63 years.

Celebrate National One-Hit Wonder Day on September 25. “Take on Me,” “I’m Too Sexy,” “Come on Eileen”—pick your pop music poison and pay homage to the musicians who briefly topped the charts at Koreatown’s R Bar. You need a password to enter, so check the speakeasy’s Instagram before you go.

What better way to see one of L.A.’s most famous streets than from behind the wheel? Here’s how to make a day of it.

12 p.m. Start at the Hollywood Bowl Overlook, where telescopes and placards help you identify buildings on the skyline.

1:15 p.m. Veer of the paved road to reach the Cold War-era Nike Missile Control Site LA-96C. Climb to the top of the old radar tower for a view of the Encino reservoir.

2:45 p.m. Make a quick left turn at Las Virgenes to peep the impossibly elaborate Malibu Hindu Temple, where you can meander, meditate, or take a tour.

5 p.m. Ready for a drink? Thought so. Sip on brut rosé at Malibu Wines (or, if you’re feeling ambitious, book a wine safari) before turning around in time for the sunset.

“I love the Rancho Santa Ana Botanic Garden. Go there and see what California used to look like it all of its undisturbed beauty.”